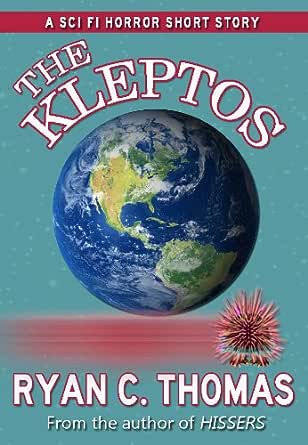 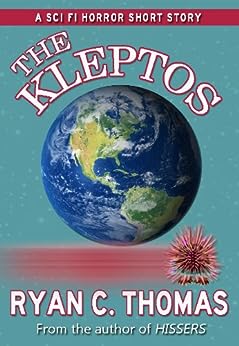 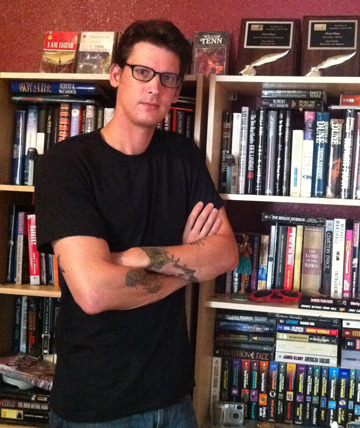 Silver Screen Videos
4.0 out of 5 stars Grand Theft Comedy
Reviewed in the United States on 16 July 2015
Verified Purchase
I first experienced Ryan Thomas when I read "The Summer I Died," a novel so graphically gruesome that it makes the "Saw" movies look like an Ace Hardware commercial in comparison. So I wasn't sure what to expect in reading "The Kleptos," which he bills as a "Sci Fi Horror" short story. What I got was a tongue-in-cheek tale that delicately tiptoes the line between silliness and farcical hilarity.

The titular kleptos are aliens who arrive on earth with the goal of helping themselves to anything that they can get their hands or, more precisely, their claws on. They are creatures about a foot long who have the ability to steal and shrink just about anything they want and fit their loot inside a space ship that's not much bigger. They also move fast and are darned tough to see, making it difficult for people to realize they're here. When Stanley, the neighbor of the narrator, first tells him about the kleptos, the narrator thinks poor Stanley is drunk or nuts, but gradually, as the story goes on, he catches sight of them as well, and the story gets increasingly wilder as the thievery spirals out of control.

"The Kleptos" is a story that can be read on two different levels. Some of what goes on in the story is quite gruesome, especially the fate of one character in particular, and Thomas describes these events in somewhat of a straightforward manner. However, he intersperses those sections with off-the-wall, cleverly witty observations about his neighbors and what's going on. For example, when he notes that the creatures stole his sink but left the dishrag behind, he observes "Unless I planned to clean the creatures to death, the dishrag was useless."

Because "The Kleptos" is only a 20-page or so short story, Thomas is somewhat limited in how far he can go with the story, but, ironically, the ending takes the story a bit too far. The last couple of pages don't match the tone of the earlier story, and the ending seems rushed and a bit of a letdown.

"The Kleptos" is still an amusing, at times hilarious, absurd story. Based on the earlier book of his I'd read, I wouldn't have thought Thomas had a literary sense of humor, but it's abundantly evident in nearly every single paragraph. The basic concept of a group of critters taking everything including the kitchen sink is bizarre enough to begin with, and Thomas plays along with it beautifully. I'm only glad that those critters didn't steal it off my Kindle before I had a chance to read it.

Rick Moschgat
5.0 out of 5 stars The Kleptos
Reviewed in the United States on 12 July 2013
Verified Purchase
Kevin's neighbor, Stanley, claims that a UFO the size of a football has landed in his yard. He's also saying that the aliens robbed him blind. Kevin doesn't believe any of it at first and thinks his neighbor is crazy. That is until things start disappearing at his house as well.

From the very first page, I was laughing out loud at Ryan's "The Kleptos". The only complaint that I have is it was too short. I knew I was getting close to finishing, but, I didn't want it to end.
If you like a laugh with your horror/sci-fi, grab this short story! I highly recommend it!
Read more
Helpful
Sending feedback...
Thank you for your feedback.
Sorry, we failed to record your vote. Please try again
Report abuse