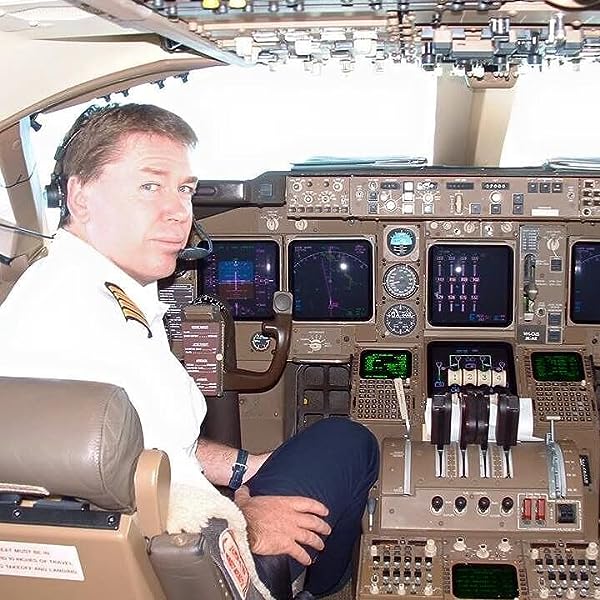 by Jeremy Burfoot (Author)
4.5 out of 5 stars 23 ratings
See all formats and editions
Sorry, there was a problem loading this page. Try again.

An inspirational and exciting adventure with tips and advice for young pilots starting their careers.
Inspired by the first moon landing at the age of 10 in 1969, Jeremy Burfoot decided to become a pilot. He joined the New Zealand Air Force as a navigator at the age of 18 and was the navigator on the search for the Mt Erebus DC10 crash. He obtained his pilots licence privately while still in the RNZAF and then went to Papua New Guinea to fly for Talair PTY for a couple of years.

He joined Qantas as a pilot in 1984 and became an Australian citizen shortly after that. He was promoted to 747 Captain at the young age of 31. He took leave from Qantas in the 90s and flew 747s for Japan Airlines based in Anchorage, Alaska and Honolulu. He returned to Qantas and flew the 747-400 then the Airbus A380 before Covid 19 terminated his career in 2020. He has 23,000 hours of flying experience. He currently flies a paraglider to get back in the air when he feels the need.

This book has been written with the hope of inspiring young pilots to succeed in an aviation career. It includes tips for pilots and bonus chapters on the future of aviation, pilot health, flying the big jets, what makes a good pilot and getting employed as a pilot. In addition, it includes a bonus chapter on training by Captain Matt Gray, former head of Qantas training.

New children's books bundles!
Book bundles for children's growth and development. Shop now
Start reading Kiwis Can Fly: A Career in Aviation on your Kindle in under a minute.

Jeremy Burfoot is a semi-retired airline pilot living in Auckland New Zealand. He started as a New Zealand Airforce navigator and then flew light aircraft in New Guinea for a few years. He then flew for Qantas for 37 years and was an Airbus A380 Captain on retirement. He is a keen cyclist who has represented New Zealand at multiple masters world championship events with some top 10 finishes. He is also a licensed paraglider pilot. He spends his time now, writing, staying fit and helping out with charity work. He has three sons. He has a website at burfoot.net

Geoff Cowell
5.0 out of 5 stars A really hilarious account of one man’s flying career that’s hard to put down
Reviewed in Australia on 7 February 2022
Verified Purchase
This book doesn’t just dispel the myth that pilots are steely-eyed, humourless automatons; it absolutely blows it to bits. I was born the same year as the author and got into flying for the exact same reasons - adventure, travel and excitement. Therefore, I can so easily relate to the types of people and attitudes that Jeremy writes about during his hilarious account. Some of the stories are not for the faint-hearted, but neither is the job.

What is particularly enjoyable about this book is the conversational style in which it’s written. It’s as if the author is telling you his stories in person, while you share a few beers together. Once started, it’s difficult to put down, and I highly recommend it to any broad-minded young person who wants an insider’s no-holds-barred look at the world of professional flying. A truly great read with lots of laughs.
Read more
Helpful
Report abuse

Terry Rice
5.0 out of 5 stars Wonderful Career Full of Humour
Reviewed in Australia on 16 January 2022
Verified Purchase
As an ex aviator I related perfectly with Jeremy’s lifetime aviation experience and laughed my way throughout this totally enjoyable and informative book.
Read more
Helpful
Report abuse

Graeme Spafford
5.0 out of 5 stars A Kiwi really can fly
Reviewed in Australia on 12 November 2021
The cover; what a magnificent shot of a 747.
His Mum & Dad and 3 sons most surely be proud of his achievements to date. A true life example of striving for the epitome of perfection, in life, welfare & flying.
I met Jeremy in Mt.Hagen PNG some 40 years ago. I had an interest in aviation but failed to make progress due to my colour-blindness. Jeremy "took me on" as his co-pilot when I took time off from my Bank Manager duties.
Anyone with aspirations in aviation of any form should be inspired on reading this book. If not, your head is not right for aviation
Read more
Helpful
Report abuse
See all reviews

Amazon Customer
5.0 out of 5 stars The contradiction in the headline!
Reviewed in the United Kingdom on 8 May 2022
Verified Purchase
The contradiction in the title is not really solved until near the end of this well crafted book. The bird Kiwi weighs in between 3 and 11 pounds. An aircraft with the designation of A380 weighs in at 589 tons. The Kiwi that can fly is the author who after a few hours training, straps 589 tons of metal to his body and then fly with hundreds of passengers anywhere in the world. The big problem for most readers is that once started, it is virtually impossible to put down. The style of writing is such that an experienced jet pilot and a vertigo challenged person can both get a great deal of knowledge in a way that can be retained and recounted later. It is not a book for the faint hearted and at times, best kept away from young children.
As regards these “few hours” , BURFOOT describes how he learnt to fly and then his career path including Qantas and Japan Air Lines and return to Qantas.
There were so many contrasts in the (rest) periods between flying. Being based in Anchorage for a time and then flying to Hawaii, ski on snow and rapidly transitioning to diving in tropical waters, he had a fantastic time that we all drool over. And he was paid for it! Never enough and he has devoted a chapter to expressions about airline management and their finances. One sad note related to his involvement in the early search for the DC10 missing at Erebus in 1979 before it was found by US Navy helicopters. The battles between Qantas pilots and its management reflect the battles after Erebus between Air New Zealand and its pilots. Fortunately the Qantas battles were just financial.
The Chief Accident Inspector in New Zealand for some of the time was the brother of the author (Tim Burfoot). Fortunately the author did not need to use the services of his brother although there were incidents that without Jeremy Burfoot’s experience could have led to such a disaster. Having a little knowledge of the expertise of this accident inspector led me to obtain “Kiwis Can Fly”. I knew it would make a good informative albeit controversial read. A must for any aspiring pilot’s bookshelf, as well as anyone else interested in flying.
Read more
Report abuse

Sumit S
5.0 out of 5 stars And kiwis can write to!
Reviewed in India on 28 March 2022
Verified Purchase
A straight , unscripted, free flow of candid thoughts , while piloting a 747. A take on the aviation industry, culture of an international pilots life. It highlights the preparation, that goes into earning your command in airlines like Quantas made famous by "Quantas never crashed" dialogue in Rainman, now you know why !!!

It is ideal for future pilots, to know what it takes, do if you have the right stuff ?

Being a pilot myself, there is lots to learn and to gain insight into Captain Jeremy's thought process.

A tight slap on aviation industry post Covid and their corporateisation of management the spat's between employees and the board and the reasons behind them are illuminating! A gripping tale! Go for it!!
Read more
Report abuse

Amazon Customer
5.0 out of 5 stars A thoroughly enjoyable read
Reviewed in the United States on 20 November 2021
Verified Purchase
Review

This book ticks a lot of boxes. If you ever wondered what it takes to become an airline pilot then this book is for you. But it is not just that. This is a well written story of one man's quest to pursue a career he had dreamed since he was a boy. The book is written with a sense of humour and there are many funny anecdotes concerning himself and people he met along the way.
Jeremy illustrates the glamorous life style of a jumbo jet pilot with stop overs in exotic places like Paris and San Francisco and chances to get out and see those places. However it becomes abundantly clear that there is more to just dreaming of getting the job and he makes no secret of the personal sacrifices he made to just get into the position being able to apply for training to become an airline pilot. (His time spent in Papua New Guinea could be a book on its own).
Starting with his entry into the Royal New Zealand Air Force as a navigator trainee the story moves on to life on No 5 Sqn crewing on the Lockheed P3K Orion including being part of the search for the missing Air New Zealand DC10 in November 1979.
Interspersed with his training and success as a pilot there are numerous "handy hints" for aspiring commercial pilots which would be of great benefit for anyone new to flying commercially.
I am not one to read a book quickly but in the case of "Kiwis Can Fly" its an exception. I found it very hard to put down. Full marks Mr Burfoot.
Read more
Report abuse

Brian Nelson
5.0 out of 5 stars The real deal
Reviewed in the United States on 16 December 2021
Verified Purchase
I usually read books for one of two reasons - to be amused, or to be informed. This book does both. It chronicles Jeremy Burfoot’s career in aviation, from a bright-eyed ten year old listening live to the first moon landing in 1969, to his retirement as a 23,000 hour captain with Qantas airways. The highly amusing anecdotes are interspersed with some really good advice for anyone considering a flying career.
This story has all the more value because it follows the more difficult path of a general aviation pilot wanting to get into the airlines. Jeremy didn’t have the golden ticket of military flight training.
He could be accused of a certain amount of political incorrectness - I would call it instead the wisdom gained from a life well lived. If you are interested in the career advice in this book, pay particular attention to the attributes required of an airline pilot.
If you’re not interested in that stuff, read it anyway. You’ll be highly entertained.
Read more
Report abuse

jp
5.0 out of 5 stars Funny and informative for aspiring pilots
Reviewed in the United States on 7 November 2021
Verified Purchase
Captain Burfoot’s writing style is fantastic, I can imagine myself in the cockpit listening to his stories as I read. If you’re PC you might not enjoy the book but buy it anyway so you can get upset at nothing. Looking forward to getting my autograph from the author…
Read more
Report abuse
See all reviews