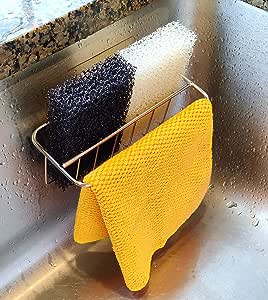 DOES NOT FALL OFF: If you want a specially made sponge holder for kitchen sink that does not fall, get our sink caddy that does not use suction cups. Our special adhesive stays on strong, but comes off easily when needed.

FITS 2 SPONGES & 1 DISHCLOTH: Our kitchen sponge holder will keep your sponges and wash cloths out of the way when finished. Dry quickly inside sink without leaving outside messes.

INTERCHANGEABLE DESIGN: This kitchen sink caddy is a unique interchangeable sponge holder and bracket system. Unlike a standard kitchen sponge holder, you can take this sponge caddy out of the bracket anytime for easy cleaning.

Shreyas R. Dusane
1.0 out of 5 stars not worth it....
Reviewed in the United Kingdom on 8 June 2019
Colour: 0) 2in1 NO FALL Sponge HolderVerified Purchase
it does not stick to sink in the way it is advertise ....... I followed the instruction given on the box but it did not worked and now its the case is that it cant even hold its on weight.....
Read more
2 people found this helpful
Helpful
Sending feedback...
Thank you for your feedback.
Sorry, we failed to record your vote. Please try again
Report abuse

fatema
4.0 out of 5 stars Holds the square sponge quite well
Reviewed in the United Kingdom on 7 January 2020
Colour: Dish Cloth HolderVerified Purchase
I bought this about a month ago and fitted it straight away. It holds the square sponge quite well just a bit squashed. While taking the sponge out of the rack the hook also comes out sometimes so you may need to use two hands.
Read more
Helpful
Sending feedback...
Thank you for your feedback.
Sorry, we failed to record your vote. Please try again
Report abuse

Amazon Customer
2.0 out of 5 stars Not good value for money.
Reviewed in the United Kingdom on 31 March 2020
Colour: Dishcloth+Sponge CaddyVerified Purchase
The product was overall okay but the holders are glued onto like a silicone sticky pad which you put onto sink. My caddy lasted me 6 weeks only before the caps came off the silicone pad.
Read more
Helpful
Sending feedback...
Thank you for your feedback.
Sorry, we failed to record your vote. Please try again
Report abuse

Chris
2.0 out of 5 stars Didn’t stick
Reviewed in the United Kingdom on 19 February 2020
Colour: Dishcloth+Sponge CaddyVerified Purchase
Followed the instructions carefully. It didn’t stick for more than a few hours
Read more
One person found this helpful
Helpful
Sending feedback...
Thank you for your feedback.
Sorry, we failed to record your vote. Please try again
Report abuse

Hair Obsessed
1.0 out of 5 stars Rubbish
Reviewed in the United Kingdom on 7 April 2020
Colour: 0) 2in1 NO FALL Sponge HolderVerified Purchase
Does not stick to the sink as advertised. Followed instructions and fell off 10 minutes later without anything in it!
Read more
Helpful
Sending feedback...
Thank you for your feedback.
Sorry, we failed to record your vote. Please try again
Report abuse

tomi wahlroos
5.0 out of 5 stars It's crazy but I have rally been looking for solution to to this problem
Reviewed in the United Kingdom on 4 February 2020
Colour: Dish Cloth HolderVerified Purchase
Having the kitchen wipe hanging from the tap has annoyed me always and now it's solved with a nice looking solution.
Read more
Helpful
Sending feedback...
Thank you for your feedback.
Sorry, we failed to record your vote. Please try again
Report abuse

s
1.0 out of 5 stars Not fit for purpose
Reviewed in the United Kingdom on 31 March 2020
Colour: 0) 2in1 NO FALL Sponge HolderVerified Purchase
It doesn’t work.
Doesn’t stick.
Waste of money

Julie
2.0 out of 5 stars Didn't hold
Reviewed in the United States on 15 September 2018
Colour: 0) 2in1 NO FALL Sponge HolderVerified Purchase
Sorry to say - I followed directions, using alcohol wipe, drying sink, applying bracket and leaving 24 hours before attaching the holder. The next day when I got home from work it was no longer attached. We resorted to using a zip tie to wrap it around the neck of the faucet, which is not ideal. The caddy itself is well made, solid and nice looking. We're just disappointed that it didn't attach as expected. Only one stick pad was included so I can't even try again.
Read more
45 people found this helpful
Helpful
Sending feedback...
Thank you for your feedback.
Sorry, we failed to record your vote. Please try again
Report abuse

Quality Eng
1.0 out of 5 stars Another one bites the dust (ie at the bottom of the sink)
Reviewed in the United States on 5 January 2019
Colour: Dishcloth+Sponge CaddyVerified Purchase
I like the concept of adhering a bracket to the sink so that the basket can be easily removed vs suction cups. (I have an enameled iron sink so saddle style will not work. Divider is too wide for current basket models.)

Being a tad compulsive, and noted that it did not stick for many reviewers, I cleaned the area with soap, then iso-propyl, and then the provided pad. After letting it dry for hour (water never on) I put the pad on, and then waited close to 36 hrs before hanging the basket. After 2 days of use, I thought I had it nailed. Next morning sitting at breakfast I heard the clunk as the basket fell into the sink. Giving it 2 stars, pending a 2nd effort on my part.

BTW- I am wondering if the age of the sink (18 yr), the sink material (porcelain), or the temp during curing process ( below 70 F) contributes to the failure.

SECOND TRY
As planned I did give it a 2nd try. Remove old adhesive pad from bracket. Scrubbed sink with Dawn to remove any grease, rinsed thoroughly, dried, then washed with isopropyl alcohol (from bottle, not diluted version in provided pad). with hair dryer warmed desired area of sink, so that it was warm to touch, and place bracket in place applying pressure for about a minute. Then we went out of town for a week, allowing pad adhesive to fully cure--just bracket without caddy. (Directions say 24 hr). Upon return mounted caddy and placed sponge and dish rag in/on caddy. After a week, I thought I had it figured out, since bracket was still in place. A couple of days later, while at the stove I heard the THUNK. YES it peeled away again. I weighed the max load (caddy, wet dish rag, sponge, scrubber) and it was about a pound. (max load on box says 6 pounds! Do they mean 6 ounces???)

I thought I was smarter than the average bear--apparently not. My experience was similar to so many others. Don't waste time or money on this product.

Great idea, but just does not work on my sink. I could offers some hypothesis as to why, but this is not the place.
If the makers were smart, they would make a magnetic bracket (no adhesive) for people with enameled cast iron sinks. In fact I would gladly test it out for them at no charge.

Wina N.
5.0 out of 5 stars Works great for my needs
Reviewed in the United States on 27 January 2019
Colour: Dishcloth+Sponge CaddyVerified Purchase
Had this for almost a month now and so far has worked great for me. I know sometimes a product can be hit or miss for diff customers but the one i got has been sturdy and not fallen off. The adhesive was easy to attach and has good strenth but we'll see how it holds up over time. I am able to fit 1 sponge (vertical or horizontal) and 1 bottle sponge cleaner nicely on the rack side. I have a deep sink so the bottle cleaner hangs perfectly without touching the bottom of sink. Then i can hang a pair of gloves or rag on the holder side. If i could make one suggestion that would make this product better it would be for it to be thicker and longer to also fit the dish soap bottle but it wasnt intended to so cant knock it for that. See pix for details.
Read more