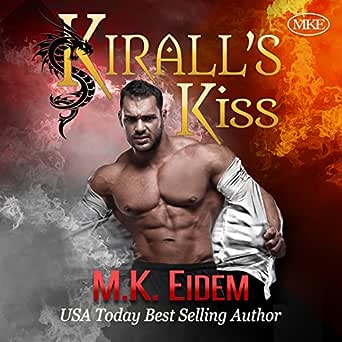 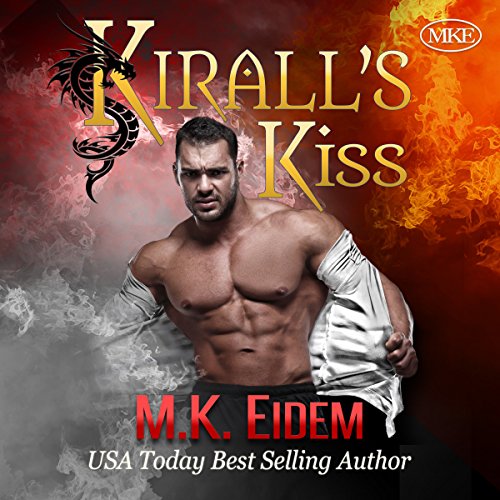 4.5 out of 5 stars
4.5 out of 5
195 global ratings
How are ratings calculated?
To calculate the overall star rating and percentage breakdown by star, we don’t use a simple average. Instead, our system considers things like how recent a review is and if the reviewer bought the item on Amazon. It also analyses reviews to verify trustworthiness.

Kindle Customer
5.0 out of 5 stars Kirall's Kiss
Reviewed in Australia on 6 February 2018
Verified Purchase
I love the way M.K. Eidem draws you into her stories, a truly gifted writer.
Autumn has had a traumatic and tragic life.
The loss of her family left her alone, no close friends or family.
Kiralls is a Black Prime ,a Dragoon, the strongest and more powerful of his kind.
Wait to he meets Autumn. Get this book and you'll be hooked

Tessa
TOP 100 REVIEWER
5.0 out of 5 stars Hopefully the start of another series.
Reviewed in Australia on 11 June 2016
Verified Purchase
I really liked this story. It was somewhat different to Michelle's other books that I have read (a lot more explicit sex) but I have to say that it was acceptable for the story-line.
Autumn's story was the crux of the plot and was told in segments that fit in very well.
I'm hoping that this is the first book in another series.
Definitely mature readers only.
Read more
Helpful
Report abuse

Leisha Andrews
TOP 500 REVIEWER
5.0 out of 5 stars A massive fan of M.K Eidem
Reviewed in Australia on 12 September 2016
Verified Purchase
Love M.K Eidem! Was put onto this author by another avid scifi romance reader and fell in love. My only problem is that I read faster than she writes! I enjoyed every book that she has written and really hope that there are more to come. Please keep writing! You have a massive fan here.
Read more
Helpful
Report abuse

Toni
5.0 out of 5 stars Five Stars
Reviewed in Australia on 18 May 2016
Verified Purchase
Enjoyed this very much cannot wait to read the other books that wll be coming in this series
Read more
Helpful
Report abuse

Dilly
1.0 out of 5 stars Grubby and dreadful!
Reviewed in the United Kingdom on 12 September 2017
Verified Purchase
I've recently got quite hooked on M.K.Eidem's books and really enjoyed them as a rollicking good read with excellent storylines and good characters. This was NOT the case with this book, it was like a sleazy sexual encounter in a grubby motel, I actually felt like I needed a shower after reading it. It made me feel like a voyeur. The basic storyline was a good one and as another reviewer has put had the groundwork for a good novel but the way this one ran off the rails was horrible. Her other novels invite you in to get to know and like her characters and to care about them which is a talent in a novelist that not all are gifted with, not so with Kirall and Autumn. Please do not write another one like this. And to all fans of M.K.Eidem don't bother with this one it has the potential to turn you off of an otherwise excellent writer.
Read more
5 people found this helpful
Report abuse

Love my Kindle
5.0 out of 5 stars Love Paranormal Romance?
Reviewed in the United Kingdom on 3 May 2020
Verified Purchase
I strongly feel the need to put this out there and ask this question as its something that I have found, has not only been going on for a while now but is getting progressively worse and, is really starting to ‘get my goat’.

Obviously some of you will probably disagree with my thoughts, and that’s fine but still…., it bothers me. Has ANYONE noticed that eBooks by ones favourite authors are going up in price exponentially? And more to the point, especially at this bloody awful time, when this virus seems to have messed up peoples lives, jobs and finances as they are stuck at home in isolation and, are now ‘captive audiences’?
What’s worse? How does, for instance, an eBook that was published say 4 years ago that cost £2.85 then, NOW cost £4.99? It’s a xxxxxx eBook, it wasn’t rebound in some aaaammmaaazzing digital eParchment paper or, re-whatever’s into twice it’s original length the answer is, no, it’s just the same eBook story, no changes except they’ve probably corrected/updated their mistakes. Of course once I’d noticed that, I had to cross check some of my other eBooks prices when they were first published, to the price they are today and…. WOW, just WOW, there’s loads of authors doing it.

Whenever you buy a paperback book in the shops when it first comes out, it’s at a set price. Over time, say 1 to 2yrs later, that same novel, when you see it again sitting on the shelves is, half that original price. Roll forward another 2 years and, that book is now 99p. But the same cannot be said for when it’s an eBook. What happens when it’s on digital? I’ll tell you what happens, the price goes up – a lot. That just doesn’t seem right. I know some people are going to say stuff like ‘that’s just the costs that companies like Amazon are taking out of the sales’ but is it? And, unless that kind of information is made public, how does the ‘Joe Blogs avid book reader’ get to know this and, not get royally xxxxxx xxx with the way eBooks are skyrocketing?
Read more
Report abuse

Kindle Customer
5.0 out of 5 stars A Party, Mates and Afterwards
Reviewed in the United Kingdom on 29 April 2020
Verified Purchase
Autumn is asked to take her flatmate's place at a party and she agrees. Kirsty had been invited back at the request of her previous date.

Autumn, having rejected the tablet offered is shocked by the truth hidden by a slight of hand. Annoyed by the arrogance of the male looking down on her before Kirall realises that she is his mate. Sometime later, Kirall learns Autumn 's secret.

With return to Mondu, Kirall's family are shocked by their news. Then the truth of Autumn 's identity. Many twists and turns before all becomes clear and all ends well.
Read more
Report abuse

J
1.0 out of 5 stars Not worth it.
Reviewed in the United Kingdom on 14 August 2016
Verified Purchase
Not what I expected from a Eidem book. It was just about nooky (sex). Eidem other books have a storyline and depth. This is more about the bed aerobics. Usually her books have more than two main characters and a few others that just gives you a bit of a story. It was a shame I could seen glimpses of a cracking book (like Grim) but Kirall's Kiss didn't live up to it's potential. A disappointing read!
Read more
7 people found this helpful
Report abuse

Max
5.0 out of 5 stars Great read
Reviewed in the United Kingdom on 27 December 2020
Verified Purchase
Incredibly saucy (in a good way). I wasn’t expecting it to end where it did though. And it seems a little pricey for the length of the book but it was good and if I could go back I would buy it again. 👍
Read more
Report abuse
See all reviews
Back to top
Get to Know Us
Make Money with Us
Let Us Help You
And don't forget:
© 1996-2021, Amazon.com, Inc. or its affiliates