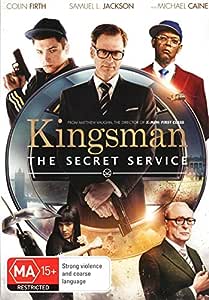 Manners Maketh Man. Based upon the acclaimed comic book and Directed by Matthew Vaughn, Kingsman: The Secret Service tells a story of a super-secret spy organisation that recruits an unrefined, but promising street kid into the agency's ultra-competitive training program just as a global threat emerges from a twisted tech genius.

A dream is born

20th Century Fox’s story begins in a tiny theater on New York’s Lower East Side. In 1904, fresh from Hungary, 25-year-old William Fox amazed audiences with his magical hand-cranked films. The beginnings were humble – folding chairs, a painted wall for a screen – but the desire to entertain and move people has been at the core of what 20th Century Fox has been doing ever since. By 1915 Fox’s five-cent movie shows were wildly popular and his single screen grew first into a chain of 25 theaters around New York City and then into a movie making business.

MrsEngelhardt
TOP 1000 REVIEWER
5.0 out of 5 stars My life is now complete
Reviewed in Australia on 23 January 2019
Format: Blu-rayVerified Purchase
Mr Darcy as a spy in 4K, there is literally no more I could ask for.
Read more
Helpful
Comment Report abuse

bernie (xyzzy)
TOP 500 REVIEWER
3.0 out of 5 stars Formula fun nothing exceptional
Reviewed in Australia on 11 November 2019
Format: Blu-ray
Only an organization that is not answerable to any government or group can maintain the safety of all against cabals and megalomaniacs; this includes the nefarious Valentine (Samuel L. Jackson.)

The old guard is dying off due to attrition. A new crop of recruits will be needed to fill their mission. Can a rambunctious upstart Eggsy (Taron Egerton) be the one?

We watch the selection process while all the time keeping an eye out for bad guys and nasty deeds.

It is a tad over done with potty mouth. However, this can be overlooked.

E. A. Solinas
TOP 50 REVIEWER
4.0 out of 5 stars Are we going to stand around here ALL day, or are we going to fight?
Reviewed in Australia on 27 February 2018
Format: DVD
Here's an idea for you -- James Bond in the style of "Kick Ass," with a side of Harry Potter. Awesome? Awful?

Yeah, "Kingsman: The Secret Service" -- based on Mark Millar and Dave Gibbons's comic book series -- could have been the biggest, most grotesque flop in years. Instead, it ends up being a quirky, clever spy thriller that uses all the cliches in fresh ways -- it has the updated villains and razor-edged violence of newer spy movies movies, combined with the style and Empire sensibilities of the older ones. Also, Colin Firth as a secret agent.

Smart but aimless, Gary "Eggsy" Unwin is like thousands of other working-class British youths -- he lives in a rotten little apartment with his neurotic mother and abusive stepfather, and has gotten in some scrapes with the law. The one unusual thing about him is that when his father died under classified circumstances, and a mysterious man named Harry Hart (Colin Firth) left him with a medal, a phone number, and a code phrase for if the Unwin family ever needed help.

When he's arrested for car theft, Eggsy calls the number and is promptly bailed out by Hart. He soon finds out that Hart isn't just an aristocratic gentleman -- he's a Kingsman agent who can easily take down a whole pub full of thugs. So when Eggsy is offered a new life as a Kingsman, he takes it immediately. There's only one opening, but his street smarts, kindness and intelligence put him far ahead of the Oxbridge-educated youths he's competing against.

While he's undergoing a grueling training regimen, the Kingsmen are investigating a plot involving a kidnapped professor, a dead Kingsman agent, and the lisping billionaire Richmond Valentine (Samuel L. Jackson). Celebrities and world dignitaries are going missing, and Valentine's plans for the world may be the most devastating ever. Can the Kingsmen — new and old — bring him down?

“Kingsman: The Secret Service” is a fascinating take on the whole secret agent cliche. It both subverts (Eggsy) and affectionately homages (Harry) the whole idea of the upper-crust secret agent who loves fine liquor, fine suits and dangerous missions -- and unlike many a homage, is entirely entertaining in its own right. This is the kind of movie where a diabolical villain has a giant cheesy prison where he keeps everyone who won't agree to his master plan!

And it has some gloriously over-the-top action scenes, including some Bond-style goons (including an acrobatic assassin with bladed prosthetic legs) and stylishly gruesome violence (flips, flying teeth, heads exploding with fireworks), which are glorious when handled with the sort of sleek, elegant style of the Kingsmen (one of them catches a glass of fine whisky in mid-fight because "It would be a sin to spill any"). Paired with that is a wicked sense of humor, such as a villain who plans to kill everyone on the planet... but can't cope with the sight of blood.

But it also has a surprising amount of substance, mainly by looking at the class system still unofficially in place in, among other places, England. The leader of the Kingsmen makes it clear that he wants "the right sort" to be these positions, and Eggsy has to complete with a bunch of people who have all the advantages in life. "... judging people like from your ivory towers, with no thought about why we do what we do." Kids like Eggsy can do great things, but only if given the opportunity.

What flaws does it have? Well, the whole "Kingsman education" sequence is skimmed over as quickly as they can manage (partly by putting Harry in a months-long movie coma), but it STILL kills all momentum going on in the movie. Things don't pick up again until Eggsy is almost finished.

The elder Kingsmen are a who's-who of beloved British actors -- Michael Caine, Mark Strong, and of course Colin Firth as a gloriously gentlemanly agent who can take out a whole pub full of thugs with only an umbrella and a watch. He has good fatherly chemistry with Taron Egerton, a brashly endearing youth who just needs a door opened to show off that he's smart (despite not knowing a pug from a bulldog), strong and compassionate. And of course, Jackson is clearly having the time of his life as an old-school destroy-the-world villain who serves McDonald's at his exclusive dinner parties.

Despite losing its way in the training montage, "Kingsman: The Secret Service" is a fun, wild adventure that blows a kiss to the old-timey spy thrillers, while also carving out a niche of its own with bladed feet. Smart, sleek and entertainingly violent.
Read more
Helpful
Comment Report abuse

Jake Bartlett
5.0 out of 5 stars Worth it
Reviewed in Australia on 26 March 2019
Format: Blu-ray
Loved every second of this movie especially on 4k
Read more
Helpful
Comment Report abuse
See all reviews from Australia

The Shape 78
5.0 out of 5 stars Kingsman 4K
Reviewed in the United Kingdom on 3 August 2016
Verified Purchase
Kingsman is a fun action film, and the 4K is just stunning.
Read more

Bluelight
5.0 out of 5 stars Bluelight
Reviewed in the United Kingdom on 24 July 2016
Verified Purchase
Excellent film over 2 hours long.
It follows a James Bond type theme but very much better.
Special effects are amazing and is filmed in 4K UHD. But if you haven't a 4K player a normal
Blu-Ray is provided too.
An ultraviolet code is also provided for use on other devices.
Read more
One person found this helpful
Helpful
Report abuse

Steve A.
5.0 out of 5 stars If you like fantasy action this is a must
Reviewed in the United Kingdom on 17 December 2019
Verified Purchase
If you like action fantasy this is a must. Brillant car chases in central London, funny in places great action scenes.
Read more
Helpful
Report abuse

AtterKing
4.0 out of 5 stars Looks good in 4K.
Reviewed in the United Kingdom on 13 October 2016
Verified Purchase
This is my first 4K UHD movie and looks good on my Sony 4K TV played through Xbox One S. Good movie to watch but not possibly one I'll keep going back to.
Read more
Helpful
Report abuse

Paul Martin
5.0 out of 5 stars Stunning 4K film
Reviewed in the United Kingdom on 20 October 2016
Verified Purchase
Stunning in all its 4K glory. First viewing of this film and would've loved it anyway, but in 4K it was stunning. Picture was amazing (but I've been watching 4K material for a while) but sound is absolutely incredible if you have a decent 5.1 or 7.1 set-up.
Read more
Helpful
Report abuse

K. Cashin
5.0 out of 5 stars Five Stars
Reviewed in the United Kingdom on 6 February 2017
Verified Purchase
I like this movie and in 4k with HDR it looks amazing.
Read more
Helpful
Report abuse

Amazon Customer
5.0 out of 5 stars Five Stars
Reviewed in the United Kingdom on 12 May 2017
Verified Purchase
Fab all the way and 4k looks stunning
Read more
Helpful
Report abuse

steveh
5.0 out of 5 stars Five Stars
Reviewed in the United Kingdom on 18 May 2017
Verified Purchase
Just great fun, even if very tongue in cheek
Read more
Helpful
Report abuse

See all reviews from Australia