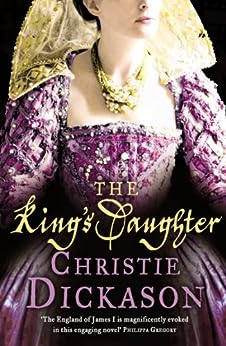 The daughter of James I, the Princess Elizabeth would not be merely her father's pawn in the royal marriage market.

The court of James I is a dangerous place, with factions led by warring cousins Robert Cecil and Francis Bacon. While Europe seethes with conflict between Protestants and Catholics, James sees himself as a grand peacemaker--and wants to make his mark by trading his children for political treaties.

Henry, Prince of Wales, and his sister, Elizabeth, find themselves far more popular than their distrusted father, a perilous position for a child of a jealous king. When Elizabeth is introduced to one suitor, Frederick, the Elector Palatine, she feels the unexpected possibility of happiness. But her fate is not her own to choose--and when her parents brutally withdraw their support for the union, Elizabeth must take command of her own future, with the help of an unexpected ally, the slave girl Tallie, who seeks her own, very different freedom.

Praise for The Firemaster’s Mistress:

‘A rich mix of romance, suspense, adventure and lightly-worn knowledge. Gunpowder, treason and plot have never been so entertaining.’ Kate Saunders, The Times

‘Marries conspiracy theory to Jacobean high-jinks…a racy read…reveals the principal actors to be models of conspirators everywhere: single-minded, ideologically driven, careless of their own and others’ lives, believers for the wrong reasons in the efficacy of a single violent blow to change the course of history…so strangely does it resonate with our own times…sometimes one is momentarily unsure whether one is in 1605 or 2005 as one reads.’ Financial Times

‘The Firemaster’s Mistress is that rare historical novel: utterly congruent with history and successful as a work of fiction. It tells the story of an engaging man betrayed both by his own honour and his love for a Roman Catholic woman. His skills with explosives lead him into the very heart of the conspiracy, walking a difficult line with plotters, spymasters, and his own fears. The England of James I is magnificently evoked in this engaging novel.’ Philippa Gregory

A stunning historical novel set in the Jacobean court

Christie Dickason was born in America but also lived as a child in Thailand, Mexico and Switzerland. Harvard-educated, and a former theatre director and choreographer (with the Royal Shakespeare Company and at Ronnie Scott’s among others), she lives in London with her family.

3.8 out of 5 stars
3.8 out of 5
42 global ratings
How are ratings calculated?
To calculate the overall star rating and percentage breakdown by star, we don’t use a simple average. Instead, our system considers things like how recent a review is and if the reviewer bought the item on Amazon. It also analyses reviews to verify trustworthiness.

Sally Zigmond
5.0 out of 5 stars Another cracker of a novel from Christie Dickason
Reviewed in the United Kingdom on 18 July 2010
Verified Purchase
I have read and loved every one of Christa Dickason's novels to date (and wonder why she is not better known) and 'The King's Daughter' is no exception. The mark, to me, of a good historical novel is that it both effortlessly draws you into another time with its different sensibilities and also whets your appetite to find out more about the period. I always knew that Elizabeth, the daughter of James I was, unknowingly, I have always believed, caught up in The Gunpowder Plot and I knew that she married the Elector Palatine thus becoming the direct ancestor of the Hanoverians, Queen Victoria and our own Elizabeth II but I had never thought what kind of a person she might have been.

In Princess Elizabeth, Christa Dickason creates a delightful character, intelligent, but naive, powerful and yet weak and someone damaged by lack of affection. The author even manages to shed a sympathetic and intelligent light on the character of James I, who described himself as 'the wisest fool in Christendom'.

I am surprised by the review here that says the characters are one-dimensional. I felt totally the opposite. And as for the 'race' question. I don't think it's right to say that Elizabeth's feelings towards Tallie are twenty-first century at all or that everyone else was 'racist'. Mostly the attitude of others was born of ignorance and lack of intelligence. Which is still the case today. And it was great to see Francis Quoynt make a cameo appearance at the end to create a spectacular firework display.

Glilla Bear
3.0 out of 5 stars An ambitious novel which rather outstays its welcome
Reviewed in the United Kingdom on 24 February 2012
Verified Purchase
The object of this novel is evidently to evoke the atmosphere of James I's court - one of feverish instability, and in this it is successful. By the time you reach the end, however, you have had more than enough; it is polished off in a flurry of very short, inconsequential chapters which indicated (to me, at any rate) that Ms Dickason was also tiring of her work. Up to a point, the plot is intriguing, even exciting - provided that you do not read the family tree at the front before you read the novel. James I comes across as a real villain: foul-mouthed, insensitive, utterly capricious and unpredictable, paranoid, megalomanic and ruthless - all these aspects of his dangerous character are convincingly conveyed by Dickason. There is humour too: you don't have to speak French for the really hilarious nature in Elizabeth's eyes of her betrothal ceremony to reach you - I laughed out loud! Her love for her brother is also realistically conveyed. Finally, however, you do wish for the novel to end, and are relieved when it does. Three stars is a little mean: but four would be over-generous.
Read more
2 people found this helpful
Report abuse

LMK
3.0 out of 5 stars Beautifully written but somehow not enjoyable...
Reviewed in the United Kingdom on 6 May 2012
Verified Purchase
Seeing this book was well-reviewed I began it with enthusiasm. It certainly is very well-written, with some elegant turns of phrase. However, I found myself reluctant to finish it, which is very rare indeed for me. Firstly I felt that very little actually happened in the novel - this may suit some people, but I found that once the Gunpowder Plot was over the majority of the book was simply Elizabeth hanging around court doing little except making an extremely unlikely friendship with an ex-slave (complete with several slightly annoying circular conversations). As someone with a History degree I fully admit I am a bit "nerdy" regarding serious historical novels and prefer them to be reasonably accurate/believable. I would be happy to accept a more "trashy" novel which took such unlikely liberties as a princess dressing as a boy to visit a Southwark brothel, but since this book was well-written and intelligent I found that certain events just rankled too much for me. If you decide to read it, I would suggest you will need to be willing to suspend your disbelief, and then I am sure you will enjoy most of the novel (provided you like the slower-burn type plots). If you decide that you would prefer something a little more believable, then I would suggest sticking with Philippa Gregrory, who in my opinion does a better job of blending fiction and fact. (Although Dickason is definitely the better writer technically speaking - without her lovely imagery I would have given this two stars.)
Read more
Report abuse

grannievon
5.0 out of 5 stars The Daughter of James I of England.
Reviewed in the United Kingdom on 17 February 2012
Verified Purchase
This was an extremely interesting story about James I daughter, Elizabeth. I have never read anything about this family and found it absorbing. Elizabeth, herself, was an outspoken young woman, who frequently argued with her family, particularly about who she would (or wouldn't) marry. A very good read.
Read more
Report abuse

Sylvia
4.0 out of 5 stars The King's Daughter
Reviewed in the United Kingdom on 5 May 2011
Verified Purchase
I thought this was a very well written and interesting book. I had read nothing before on the family of James I so I found this very informative of the monarchy at that time, although the book is fiction it does give a good insight of the court life at that time. A good read.
Read more
Report abuse
See all reviews
Back to top
Get to Know Us
Make Money with Us
Let Us Help You
And don't forget:
© 1996-2021, Amazon.com, Inc. or its affiliates