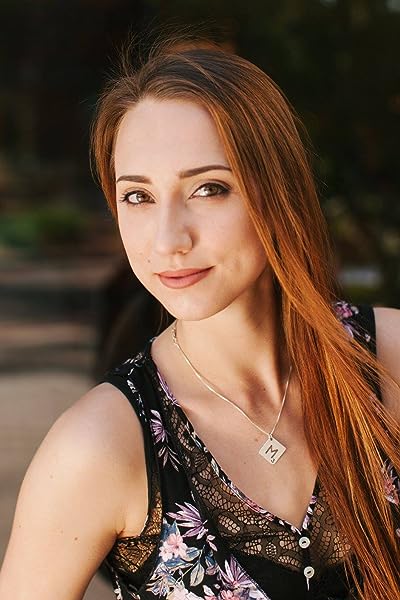 by Maxym M. Martineau (Author)
4.2 out of 5 stars 199 ratings
See all formats and editions
Sorry, there was a problem loading this page. Try again.

Page 1 of 1 Start overPage 1 of 1
Previous page
Next page
Start reading Kingdom of Exiles on your Kindle in under a minute.

Maxym M. Martineau is an article and social media writer by day and a fantasy romance author by night. When she's not getting heated over broken hearts, she enjoys playing video games, sipping a well-made margarita, competing in just about any sport, and of course, reading. She earned her bachelor's degree in English Literature from Arizona State University and lives with her husband and fur babies in Arizona. Connect with her at MaxymMartineau.com or through Twitter and Instagram @maxymmckay.

4.2 out of 5 stars
4.2 out of 5
199 global ratings
How are ratings calculated?
To calculate the overall star rating and percentage breakdown by star, we don’t use a simple average. Instead, our system considers things like how recent a review is and if the reviewer bought the item on Amazon. It also analyses reviews to verify trustworthiness.

Anja S.
1.0 out of 5 stars What a cringefest
Reviewed in Germany on 8 February 2021
Verified Purchase
May contain small spoilers

I thought to myself, finally an ADULT female protagonist that can kick butt (don't know if Amazon deletes my review if i write the A word).
Sadly, that changed as soon as she stepped into Noc's "frat house". I call it a "frat house" because those "assassins" remind me more of little frat boys than cold hearted murderers.
She suddenly turns from a butt kicking woman that deals on the black marked in a gritty and unfriendly domain filled with harsh men to a YA novel girl.

Also, the characters make no sense to me.
In the beginning i hoped that the hatred between the two protagonists will stay longer than three chapters... but no. They instantly fall in love without even knowing each other.
An assassin who lets some stranger get to him so easily?
He tries to contain his feelings because of the curse but in my opinion, Leena should've been dead by chapter seventeen with all the love he felt for her. Especially when he decides to risk his own life and even his frat house (which he cared so much for... mhm) for her.

Another thing that rubs me the wrong way is her choice of clothing.
This may sound nitpicky but would you hunt down a potential deadly A-Class beast in hotpants? I wouldn't.

What else bothered me was Noc just casually opening up to his frat boys about his feelings for Leena and his curse and them reacting so... wholesome.

Edit and definite Spoiler ahead:

I now have reached a point where I just want to stop reading. Chapter eighteen.
Them fighting a big a** A-Class Laharock mother with her newborn in full blown Power Ranger let's-fight-together fashion is too much cringe for me.
Also, Felicks' ability makes no sense to me in this situation. How can it predict the future if they haven't even decided what to do yet?
And Noc being butthurt in the MIDDLE of this whole situation where their lives are at stake because Oz will port Leena instead of him? Excuse me?
Of course they get tamed pokemon style and everyone laughs in the end.
I'm not exaggerating.

I actually kept on reading but glanced through the parts I didn't care for. Turns out that the curse changes midways? First, it doesn't matter if she loves him back or not and now it suddenly does? At first I thought, well it's only her thinking it because he didn't make it clear enough (but this book isn't that deep to make the reader think on its own to be honest...) but no... Suddenly he says, as long as she doesn't love me back she's safe. What?

One moment Noc says/thinks something and in the blink of an eye he completely changes?
First, he believes that he has to live with his crimes and doesn't deserve a cure and in the next moment when Leena says that he can still back out of getting a Gyss, he says "Never." ???

Also, if a person dies when I feel too much for them, I don't accompany them when they are about to tame a beast when I know how their charm is charming me too and I'm already too deep in love with that person.

End of rant.
I know this was long and if you read all of this... I envy your willpower.

I said this on another book review already, but... watch the Full House Intro and you'll get a feeling of what this book is.
Read more
Report abuse

Kindle Customer
3.0 out of 5 stars A very good start!
Reviewed in Canada on 6 September 2019
Verified Purchase
I think there is some real beef to this story! Towards the end it got a bit vague in what were otherwise very detailed scenes, but the somewhat rushed ending didn't detract too much. Can definitely see me picking up number two!
Read more
Report abuse

Victoria R.
5.0 out of 5 stars Wow
Reviewed in Canada on 11 March 2021
Verified Purchase
I loved the characters and the world building. I thought the romance could've been better but that didn't deter from the story in anyway. I loved this book and it got me out of a reading slump!
Read more
Report abuse

Lizzy
2.0 out of 5 stars YA at its worst - DNF
Reviewed in the United States on 12 November 2019
Verified Purchase
I'm past the point as a reader where I can handle amateurish writing that takes you on whatever ride the author has envisioned without any care for the characters or world building or logic. The actions of the main protagonists just don't make sense. They are all meringue-whipped versions of characters that I would actually want to read about. There's no grit to any of the characters and they are all just good people put in difficult situations. Case in point- the author turned an assassin's guild into a campy group of charismatic misfits who are "just misunderstood". Come on. They kill people. Lots of people. How fluffy can you make that? Why would you even want to?

Additionally our main female character Leena is presented as hardened but is also prone to fits of tears and girlish bashfulness. Leena's whole back story and plan to get back into the good graces of her fellow charmers feels terribly contrived. On the whole she's a character I neither admire nor want to read about.

Beyond character issues, the world the story takes place in is hard to pin down. At first I thought it was a medieval fantasy world, but then I revised that opinion to a more steampunk setting. However, even within this space the scenes are inconsistent. A tavern is described as lacking electricity and indoor plumbing, but then the writer has ice-cubes clinking in a glass. It's a small thing, but when stacked with all the other small things in this novel, it made the whole thing unreadable. I wish this book was more clearly labeled as YA.
Read more
41 people found this helpful
Report abuse

Amy
5.0 out of 5 stars Kingdom of Exiles
Reviewed in the United States on 25 June 2019
Verified Purchase
Leena Edenfrell thought exile from the Charmer home of Hireath was the worst thing that could happen to her. I mean, because of her exile, she was forced to sell her precious beasts on the black market just to survive—which itself is an offense punishable by death.

When she learns there’s been a bounty put on her head, she’s both surprised and not. For years, she’s been cultivating a plan to get back to Hireath and clear her name, and when she confronts the bounty hunter who holds her contract, she thinks her plan may have a chance to come to fruition.

Since being named leader of Cruor, Noc has tried to do right by his brother and sister assassins, but a curse he carries keeps him from getting too close or emotionally involved due to the resulting death of anyone he loves that loves him in turn. When a bargain with Leena demands that she provide his people with four beasts in exchange for the cancellation of her contract, he sees the opportunity to finally get the curse lifted.

Soon, however, the lines between their individual objectives begin to blur as they get caught up in an attraction neither saw coming. What Leena doesn’t know, however, is that the Cruor are bound by their oaths to carry out their jobs, no matter what, or face death.

Kingdom of Exiles reminded me of the first time I read the Night Huntress series or the Kate Daniels series or Mercy Thompson, and the list goes on. It is what I look for every time I open a new book by a new author. The feeling of every aspect of a story fitting together in just the right way. The world building, the romance, the action, the mythology, the pacing.

It was interesting seeing how Leena and Noc play off one another because they are both people who feel loneliness and vulnerabilities, but their strength lies in being able to continue on despite the loneliness and vulnerability. To continue fighting even when there seems to be no end in sight. They complement one another in that way. I found it so interesting that Maxym Martineau decided to show such blatant yearning on Noc’s part in regards to how much he’s closed himself off from feeling, and how much he wants to be able to feel. It’s probably one of the big things that separates their experiences because, if nothing else, Leena does have her connection to her beasts.

And boy, do those beasts really take center stage. Maxym Martineau has brought some truly visualized creatures to life in this book. I love their powers and I enjoyed seeing Leena pair the different beasts to the Cruor who travel with her as she searches for her own Myad-Beast whose taming will show the Charmer Council Leena’s worthiness. Having the group slowly build from enemies to family was a joy to behold.

Maxym Martineau knows how to perfectly plot out the story. While we get some closure as far as Leena’s issues with the Charmers, by the end a completely new can of worms has been opened. Noc still holds some secrets close to the chest, and while the pieces are slowly coming together, the puzzle isn’t yet complete, nor are the implications for the future realized.

I cannot wait to find out where we go next. I’m excited to meet and learn about more Beasts and I’m eagerly waiting to spend more time with this group of characters. It’s official, Maxym Martineau is an author to watch. Highly recommended.
Read more
20 people found this helpful
Report abuse
See all reviews
Back to top
Get to Know Us
Make Money with Us
Let Us Help You
And don't forget:
© 1996-2021, Amazon.com, Inc. or its affiliates