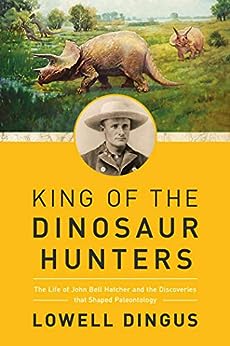 King of the Dinosaur Hunters: The Life of John Bell Hatcher and the Discoveries that Shaped Paleontology Kindle Edition

"From a research associate at the American Museum of Natural History, an exhaustive biography of an adventurous bone hunter, a leading figure in the heroic age of American paleontology. There is no lack of fascinating anecdotes. Will interest paleontology buffs.", Kirkus Reviews

"Readers learn of the great hardships of late-nineteenth-century paleontology and where to see Hatcher’s mounted dinosaurs today.", Booklist

"Fascinating. An excellent new science ­biography that will be popular with readers who already have an interest in paleontology or those who would like to develop one.", Library Journal

"Brilliant. A must-read for anyone interested in dinosaurs, natural history, or discovery.", Patch --This text refers to an alternate kindle_edition edition.

Lowell Dingus, Ph.D., is a research associate at the American Museum of Natural History in New York as well as at the Natural History Museum of Los Angeles County. He has directed numerous significant fossil exhibits and has led various paleontological expeditions around the world, including the Patagonian excavation that uncovered the first fossilized skin from an embryonic dinosaur. He has coauthored several books, including Walking on Eggs and The Mistaken Extinction. Lowell lives in New York City. --This text refers to an alternate kindle_edition edition.

Michael N.
4.0 out of 5 stars Incredibly researched
Reviewed in the United States on 8 January 2019
Verified Purchase
A very thoroughly researched book about a fossil collector in the late 1800's. The book is well written although the author only touches on his poker playing in Patagonia. Everything about this book is five stars with one exception: it is hard to read and even harder to finish. For me readability is 3 stars and research is 5, hence the four star rating. I liked the book but am not keeping in my library because I can't see myself reading it over.
Read more
3 people found this helpful
Report abuse

ggg
4.0 out of 5 stars Great
Reviewed in the United States on 31 May 2019
Verified Purchase
Excellent
Read more
One person found this helpful
Report abuse
See all reviews
Back to top
Get to Know Us
Make Money with Us
Let Us Help You
And don't forget:
© 1996-2021, Amazon.com, Inc. or its affiliates