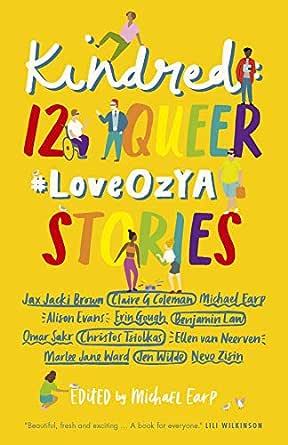 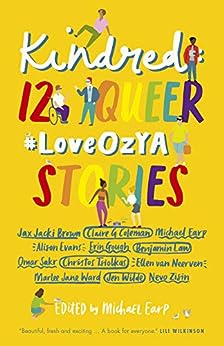 Kindred particularly excels at straddling the dichotomy of hardship versus hope that so often governs queer narratives... Overall, the collection is warm and heartfelt, highlighting the strength of friends, found family and community spaces., Books and Publishing

Perfect to add to your pride month TBR, this anthology is heartwarming, simple and unapologetic. Whilst it’s important to uplift queer voices and stories, diversity in YA shows teens of all identities, experiences and livelihoods that the world is a diverse place. Normalising queer stories into mainstream media creates a similar effect in the real world. Hardships, difficulties and disconnectedness have been present in the queer experience, and the human experience, for a very long time. It is my hope that books, stories, and activism like this is the first step in moving away from this, to a world full of acceptance, positivity, and celebration., Totally Books

This book is so powerful and a wonderful read. Each of the stories has a beautiful message that reminds us that our community is diverse within it’s diversity. Don’t be afraid to find your niche. To love who you love and try to understand those around you., Lost in Literature

This anthology is a must read and one that I wish I had when I was younger, but one I am glad is here now because at any age it’s wonderful to see this out in the world and be able to connect to it...There are funny moments, painful ones and poignant ones. I cannot recommend Kindred enough. All 12 of these writers contributed stories that are truly fantastic and it makes for a beautiful anthology., Wild Heart Reads

Highly recommended., ReadPlus --This text refers to the paperback edition.

Michael Earp is the editor of Kindred: 12 Queer #LoveOzYA Stories. He has passionately worked with Children’s and YA books for more than 16 years. He has a degree in Early Childhood Education and a Masters in Children’s Literature. He is a contributor to Underdog: #LoveOzYA Short Stories (edited by Tobias Madden) and his writing has appeared in The Victorian Writer, Aurealis and Concrete Queers. He also established the #AusQueerYA tumblr to coincide with the #LoveOzYA campaign, of which he was previously the Committee Chair.

Benjamin Law is the author of the memoir The Family Law (2010), the travel book Gaysia: Adventures in the Queer East (2012) – both nominated for Australian Book Industry Awards – and the Quarterly Essay on Safe Schools, Moral Panic 101 (2017). He’s the co-author of Shit Asian Mothers Say (2014) with his sister Michelle, and the sex/relationships advice book Law School (2017) with his mother Jenny. Benjamin has written for over 50 publications in Australia and beyond – including The Monthly, frankie, Good Weekend, The Guardian, The Australian, Monocle and The Australian Financial Review – and has a PhD in creative writing from QUT. The Family Law is now also an award-winning TV series, which Benjamin created and co-wrote. He was also a researcher and associate producer on Blackfella Films’ Deep Water: The Real Story (SBS) and a writer on Endemol Shine’s Sisters (Ten). He is co-host of ABC RN’s weekly pop culture show Stop Everything, and a panellist on TV shows like ABC’s Screen Time, Q&A and The Drum.

Christos Tsiolkas is the author of five novels including Loaded (1995), which was made into the feature film Head-On, The Jesus Man (1999) and Dead Europe (2005), which won the 2006 Age Fiction Prize and the 2006 Melbourne Best Writing Award. He won Overall Best Book in the 2009 Commonwealth Writers’ Prize, was short-listed for the 2009 Miles Franklin Literary Award and long-listed for the 2010 Man Booker Prize. He won the Australian Literary Society Gold Medal for his novel The Slap (2008), which also won the 2009 Australian Booksellers Association and Australian Book Industry Awards Books of the Year. Both The Slap and his novel Barracuda (2013) have been adapted for television. His latest book is Merciless Gods (2014). He is also a playwright, essayist and screenwriter. He lives in Melbourne.

Nevo Zisin is a Jewish, queer, non-binary activist, public speaker and author of Finding Nevo (2017), a memoir on gender transition. They are based in Melbourne/Naarm and run workshops and professional development in schools and workplaces around gender inclusivity, unconscious bias and recruitment. They have appeared in various media discussing their complex relationship with gender. Nevo is a contact point in the Jewish community for other children and families confronting issues of gender and sexuality in their own lives.

Alison Evans is the award-winning author of the YA books Ida (2017), winner of the People’s Choice at the Victorian Premier’s Literary Awards, and Highway Bodies (2019). They like to write about strange ideas and queer people. Alison is the co-editor of Concrete Queers with Katherine Back, a zine they started in 2015 that features work by queer and questioning creators. --This text refers to the paperback edition.

Kindle Customer
5.0 out of 5 stars Brilliant
Reviewed in Australia on 18 June 2019
Verified Purchase
Brilliant. Some of the best authors in Australia from a variety of backgrounds with some truly imaginative and varied stories. I loved it and so will you (or a young person in your life).
Read more
Helpful
Comment Report abuse

Amy
5.0 out of 5 stars A Great Aussie Anthology
Reviewed in Australia on 28 August 2019
These stories are not about finding love, or coming out, they are about finding someone who is like you, who knows you and understands you, if there is romance in there, great. But there are many wonderful stories about kids finding another person who understands them, and someone who, whether they know it consciously or not, are supporting them.

Not all characters in this are teens, a couple characters are in their 30s that I can best estimate, others aren’t specified, but their stories are still valid. There are a range of genres and each author has put up a story that encapsulates the theme. Kindred can mean so many things and seeing how each writer has interpreted this is wonderful.

While these are queer stories, they are also #LoveOzYA as well which showcases the great talent our LGBTQIA YA authors have. There are household names and there are new talents I didn’t know and getting some new names added to my #LoveOzYA repertoire is always a bonus. Some of these stories found their own place with me and I particularly loved Waiting by Jen Wilde. I saw myself in that story and it is proof that these stories are for everyone to enjoy.

The range of genres and representation was incredible. There’s representation from so many different cultures and voices and shows why representation matters. The tone across the stories were so different, form light hearted to dystopian, with a few futuristic and fantastic thrown in. There are some tough subjects and harsh realities but I found it refreshing because these authors don’t shy away from the realities of the world but they also treat it with a powerful care and respect.

With any anthology I am always so in awe of how one theme could be interpreted by so many different genres and approaches. It is a fantastic reminder that no matter what circumstance, no matter what reality, there is a commonality between people and the emotions and desires are universal.
Read more
Helpful
Comment Report abuse
See all reviews from Australia
Get FREE delivery with Amazon Prime
Prime members enjoy FREE Delivery and exclusive access to movies, TV shows, music, Kindle e-books, Twitch Prime, and more.
> Get Started
Back to top
Get to Know Us
Make Money with Us
Let Us Help You
And don't forget:
© 1996-2020, Amazon.com, Inc. or its affiliates