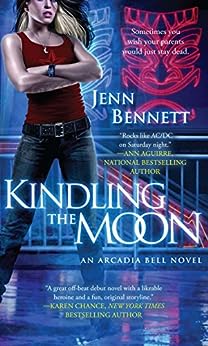 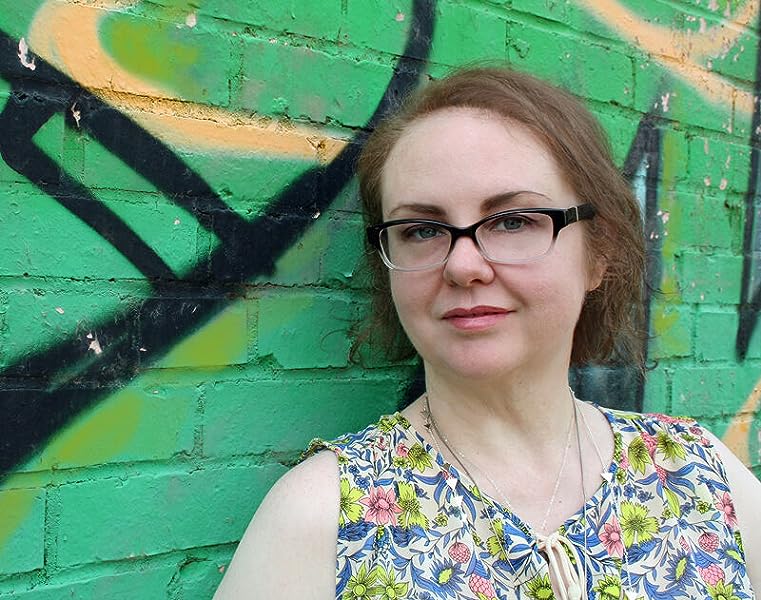 Being the spawn of two infamous occultists (and alleged murderers) isn’t easy, but freewheeling magician Arcadia “Cady” Bell knows how to make the best of a crummy situation. After hiding out for seven years, she’s carved an incognito niche for herself slinging drinks at the demon-friendly Tambuku Tiki Lounge.

But she receives an ultimatum when unexpected surveillance footage of her notorious parents surfaces: either prove their innocence or surrender herself. Unfortunately, the only witness to the crimes was an elusive Æthyric demon, and Cady has no idea how to find it. She teams up with Lon Butler, an enigmatic demonologist with a special talent for sexual spells and an arcane library of priceless stolen grimoires. Their research soon escalates into a storm of conflict involving missing police evidence, the decadent Hellfire Club, a ruthless bounty hunter, and a powerful occult society that operates way outside the law. If Cady can’t clear her family name soon, she’ll be forced to sacrifice her own life . . . and no amount of running will save her this time.

“Kindling the Moon rocks like AC/DC on Saturday night. This book has it all: great writing, action, romance, a strong heroine, a unique hero, and the best teenager ever. I can’t wait for the next one.” (Ann Aguirre, national bestselling author)

“Kindling the Moon engaged me from page one. I loved it! I immediately adored the heroine, Arcadia Bell. This book is packed from cover to cover with unpredictable twists, heart-pounding action, and heated sexual tension." (Anya Bast, New York Times bestselling author)

“Debut author Jenn Bennett takes the familiar ideas of magic, demons, and mythology, and she gives us something sexy, fun, and genuinely unique in Kindling the Moon. Arcadia Bell is a sassy, whip-smart addition to the growing pantheon of urban fantasy heroines, and Bennett an author to watch!”
(Kelly Meding, author of Three Days to Dead) --This text refers to an out of print or unavailable edition of this title.

Jenn Bennett is an artist and author who writes books for adults and teens. Born in Germany, she's lived and travelled extensively throughout Europe, the US, and the Far East. She currently lives near Atlanta with one husband and two evil pugs. --This text refers to an out of print or unavailable edition of this title.

Jenn Bennett is an award-winning author of young adult books, including: ALEX, APPROXIMATELY; STARRY EYES; and SERIOUS MOONLIGHT. She also writes romance and fantasy for adults. Her books have earned multiple starred reviews, won the Romance Writers of America's RITA® Award, and been included on Publishers Weekly annual Best Books list. In addition to being a writer, she’s also an artist with a Bachelor of Fine Arts in Painting. She was born in Germany, lived in several U.S. states, and has traveled extensively throughout Europe, China, Taiwan, and Hong Kong. She currently lives near Atlanta with one husband and two dogs.

4.3 out of 5 stars
4.3 out of 5
108 global ratings
How are ratings calculated?
To calculate the overall star rating and percentage breakdown by star, we don’t use a simple average. Instead, our system considers things like how recent a review is and if the reviewer bought the item on Amazon. It also analyses reviews to verify trustworthiness.

Jeannie Zelos
5.0 out of 5 stars terrific start to the series
Reviewed in the United Kingdom on 27 June 2014
Verified Purchase
Kindling the Moon, (Arcadia Bell 1) ,Jenn Bennett
Review from jeannie zelos book reviews
I love a good paranormal mystery, especially when there's a romantic angle to it. I'd had this one on my list of To Be Read for a while – you know, that list of books you want to read at some point...when there's time..and money! Then the fourth one came up on Netgalley for review and I had that and loved it. I knew from the quality ot the writing and plots that this would be a long time favourite series for my keepers file, and when I was offered the earlier novels for review I jumped at the chance.

So, the story starts with us being introduced to the major character Aracdia ( Cady) busy at work in her part owned Tiki bar...busy as always, serving drinks and keeping the peace between humans and earthbounds. Earthbounds being descendants of demons from generations back. To humans they look like humans, and many marry and never let their demon side be known – but its there, and Cady's bar is one of the few where all are welcome. Cady herself doesn't have demon blood but does have some special magical abilities. Then comes the shocking news her parents aren't dead after all, and the FBI – among others – are looking for them in connection with a gruesome series of murders. Cady knows they're not dead, for the past seven years she's been in hiding too, under a false name and background and had little to no contact with them. Now she needs to prove their innocence to one of the main magical societies or face giving her own life up. She teams up with Lon, an earthbound. He seems surly when they first meet but when we learn more about him, and his teen son Jupe, we see he's not like that at all. He and Cady dance around their attraction for a while but then...sparks fly and they're a great team.
Lots of “first” novels suffer from trying too hard to introduce characters and plots, and it gets overcomplicated and difficult to follow the story, but Jenn has done this perfectly – the characters are fairly limited – just the main ones focussed on, and the secondary ones there but kept back, and that allowed me to really get to know Cady, Lon and Jupe. I feel they're a great trio, and work really well together. The plots were perfect, one major one but lots of minor detours along the way keeping the story fresh and interesting, and allowing Lon and Cady to showcase their talents. So many books have just one simplistic plot and then fluff out the story with irrelevancies just to add content, but this one – it's one of those that has so much detail, keeps the reader rivetted to the page ( or screen!) and doesn't need to add superfluous padding. Every plot and little incident is relevant, and I love the challenge of trying to spot when things will turn out to be of major importance even though at first sight they seem innocous.
It's a great read, a terrific first in series and I'm really looking forward to the rest, even though I've already read the final ( fourth) book. I'm one of those readers who love to re read favourite books, and especially when I've a whole series to go through.
Stars: Five – a fabulous book.
Read more
Report abuse

serendipity5
5.0 out of 5 stars Stunning first book in a series
Reviewed in the United Kingdom on 18 September 2013
Verified Purchase
I've been reading Urban fantasy for a little over a year now, and what an enjoyable year. But this is hands down the best 1st book in a series I've read. I love series but I admit that 1st books can sometimes lack a little because of the amount of world building which has to be done, and thats fine as usually they get better and better. But this starts off fabulous and I think it just about sits up there in my top 3 series now.

Arcadia, or Cady as we get to know her is a bar owner although not an ordinary one by any means! She lives in a world where some demons are a lot like humans, just with a something little extra, different for each one. Her bar caters to demons. That on its own is entertaining enough but Cady is something else, something that we get to discover more about as time goes on. We get to meet a few other characters, most notably Lon and his son Jupiter, or Jupe. How I loved these two! I can close my eyes and picture them all and its just so real! I believed every single word of it. The story is so incredibly well written you don't have to read it, you breath it in.

If you've not tried urban fantasy before then this is an excellent starter point and if you have then get reading! I promise you you won't be disappointed.
Read more
Report abuse

LW
5.0 out of 5 stars Fab!
Reviewed in the United Kingdom on 24 February 2014
Verified Purchase
This was a bit different to the usual paranormal (you know, vampires and werewolves). This was demons and magicians - and I found it a nice change. The world is well created and the whole book was well written and free of stacks of typo's and other errors (which is a real gripe to me normally). I found myself liking Arcadia and Lon and I liked the third main character Jupe, who adds that extra something to the story. I liked the way the relationship between the characters developed. I enjoyed it so much that I read it obsessively for hours until I finished it. I've already downloaded the next one and am looking forward to seeing what happens next
Read more
Report abuse

ds
5.0 out of 5 stars GREAT DEBUT
Reviewed in the United Kingdom on 7 October 2014
Verified Purchase
What an amazing first book. I read a lot of urban fantasy and I can honestly say this is one of the best. The setting and characters are wonderful and its unusual to have a teenager as one of the main characters, don't let this put you off he's great .Plenty of action and the dialogue is great. Can't wait for the next one.
Read more
Report abuse

Amazon Customer
5.0 out of 5 stars Another great urban fantasy writer!
Reviewed in the United Kingdom on 18 June 2013
Verified Purchase
I love Arcadia, Lon and Jupe. I would class Jenn Bennett up there with Patricia Briggs, Kelley Armstrong and Kim Harrison in writing skills. Now I want all the following books.
The magic is a bit different and the demons more believable. The twists and turns in the story were good. All good characters need a few chapters to get to know them but I knew within the first chapter I knew and would grow to love Arcadia.
Read more
One person found this helpful
Report abuse
See all reviews
Report an issue
Does this item contain inappropriate content?
Report
Do you believe that this item violates a copyright?
Report
Does this item contain quality or formatting issues?
Report