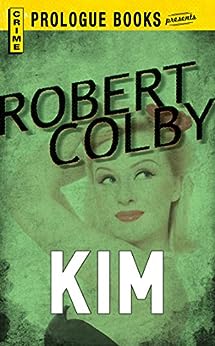 by Robert Colby (Author) Format: Kindle Edition
See all formats and editions
Sorry, there was a problem loading this page. Try again.
Kim affected men like an electric current. And she usually set off the charge. But when Eddie Tarino took her for a cruise on his yacht, she was like a little girl at the zoo - outside the leopard’s cage.

Tarino’s yacht parties were wild - featuring every kind of vice. But before this one was over, Kim had tamed the leopard - and was a full-fledged member of a strange and savage jungle . . .
Read more
Previous page
Next page

"Bob Colby was more than just a 'one-hit wonder.' He wrote several other respected novels in the 1950s and '60s, including The Deadly Desire and The Secret of the Second Door (both Gold Medal, 1959) and dozens of short stories for Alfred Hitchcock and Mike Shayne... Do me a favor: hunt down one of his novels and give it a try." -- Peter Enfantino

"He had a journalist's eye for his times. This was especially true in the novels he set in Hollywood. [The Captain Must Die] is his masterpiece. You will not be disappointed." -- Ed Gorman

Christopher (o.d.c.)
4.0 out of 5 stars Miami for a bill-and-a-half a day
Reviewed in the United States on 3 September 2014
Verified Purchase
Publication date: 1962, which you might guess from the price of a penthouse suite in Miami:

Markos produced a key and we entered an enormous living room done lavishly in Chinese modern and practically ringed with floor-to-ceiling glass. In one corner of the room there was even an ebony grand piano.
“Penthouse,” Markos announced. “Nothing to beat it in the whole g-d- town. You like it?”
“It’s gorgeous,” I said, and it was.
“Bill and a half a day,” said Markos. “C’mon, I’ll show you the layout.”

And, speaking of penthouse, this book, while never explicit, is more suggestive than most (from the paperback era).. which I kind of liked:

"... It’s only that Howie was the first man I ever knew in that way and I … I suddenly realized that he might be the last and I got a little panicky. April is only two months off and after I’m married [...] it will be too late to wake up to how much I might have missed. Because afterwards I’ll never, never have another affair. I wouldn’t do that to Howie. Or myself.”
“You wouldn’t?” I gave her the wide-eyed stare with open mouth. Kidding her because she had been speaking with such pouting, little-girl seriousness.
“No, I wouldn’t,” she said.
“Well, be calm, honey. April isn’t here yet.”
“I know,” she said. And with that she moved into my arms and fastened herself against me.

The first and last third are narrated by studly PI Rod Striker, the middle is narrated by his ex-policewoman, judo-trained assistant, Myra Blaine, who goes undercover as a b-girl to get evidence on the gangster who is bothering young Kim. I was dreading the worst for this section, but it was handled pretty well- a sort of space age Perils of Pauline.

Above average sexy, and not too serious.
Read more
One person found this helpful
Report abuse

Dave Wilde
5.0 out of 5 stars Great PI Fiction
Reviewed in the United States on 1 October 2013
Verified Purchase
A terrific pulpish detective novel. Rod Striker and Myra Bailey are private investigators in Miami. A rich older lady who happens to be a multimillionaire hires Striker. Seems her niece, the irresistible Kim, met a shark who runs strip joints and gambling boats. Now she can't get rid of Tarino whose threatening her fiancé and her aunt. The aunt wants Striker to take the mobster In a back alley and teach him a lesson. Kim is in an electric field all her own. Even her touch was electric. She admitted she was a bit nympho and proved it. This is a well- written and well crafted story that reads very quickly. Private investigators, mobsters, heiresses, gunfights, and other intrigue are all here. One of the interesting storytelling devices that Colby uses is that about midway through the book he switches viewpoints and tells the tale from Myra's point of view. All in all, one great read.
Read more
One person found this helpful
Report abuse

Joe
4.0 out of 5 stars Four Stars
Reviewed in the United States on 3 July 2018
Verified Purchase
It kept me reading and finished up in a different place than the one I was expecting.
Read more
Report abuse

B. Perry
4.0 out of 5 stars Amazson Kindle book: Kim Review
Reviewed in the United States on 27 January 2013
Verified Purchase
This is a well written mystery book that keeps your interest and does not let you figure out who did it until the very end. Has lots of twists and turns.
Read more
Report abuse
See all reviews
Back to top
Get to Know Us
Make Money with Us
Let Us Help You
And don't forget:
© 1996-2022, Amazon.com, Inc. or its affiliates