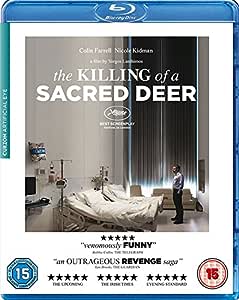 The Killing of a Sacred Deer

Colin Farrell and Nicole Kidman star in this horror drama written and directed by Yorgos Lanthimos.Steven Murphy (Farrell) is a successful cardiac surgeon who lives a happy life with his ophthalmologist wife Anna (Kidman) and their two children Kim (Raffey Cassidy) and Bob (Sunny Suljic).However, his perfect life starts coming apart at the seams after he befriends 16-year-old Martin (Barry Keoghan).Steven spends much of his time hanging out alone with the teenager and also invites him round to his upper-class home to socialise with his kids.However, when Steven visits Martin and his mother (Alicia Silverstone) for dinner, the teenager's motives for their unusual friendship become clear and it transpires he's willing to go to great lengths to get what he wants, to the detriment of Steven and his family.
Technical Specs: * Language(s): English
* Interactive Menu

Egypt Otis
4.0 out of 5 stars This video has a deeper interpretation that connects to the ...
30 March 2018 - Published on Amazon.com
Verified Purchase
This video has a deeper interpretation that connects to the Greek mythological story of Agamemnon who accidentally kills a deer in the sacred grove of goddess Artemis. She then punishes him and he is soon revealed that in order to appease the goddess he must sacrifice his eldest daughter Iphigenia.The tale in itself is allegorical and brings forth an intense interpretation of how our mistakes affects those around us and teaches us a lesson of revenge and justice. It's a very symbolic film that is very intense and gruesome. Hopefully this review helps some people understand it.
Read more
213 people found this helpful

FlowerWell
1.0 out of 5 stars The problem isn't that it's slow; it's that it's ultimately illogical and meaningless
15 November 2018 - Published on Amazon.com
Verified Purchase
Firstly, I don't mind slow-building horror, (so don't assume "this person just doesn't like that there weren't more jumpscares and cheap thrills!") For example, I loved "Hereditary" and the way all the foreshadowing and symbolism made sense in the end. Random events turned out to not be random. It was one of those films that became more impressive on the second viewing

"The Killing of a Sacred Deer" was the opposite of this. There was no explanation for a lot of the weirdness or for why the characters acted the way they did. It was like someone decided "I want to make a weird, uncomfortable movie about the Greek tragedy" without actually giving an account for why things were so weird

Only Martin was supposed to be psychologically disturbed. And yet all the characters acted in strange ways on at least a few occasions in which no mentally sound human would act. Like why would Kim still want to be with the boy who was trying to murder her and her family? "Well, if you do some mental gymnastics, the dad kind of killed them by killing Martin's dad". But for real, even if Steve 'started it', Martin was still clearly disturbed. Why would Kim want to be with him after seeing his nature?

There were three main things that should have had explanations:

--SPOILER START--
1. How did they get away with killing Bob? Their house was in a nice, quiet neighborhood with other houses right next to theirs. Neighbors would have heard the four / five gunshots and called the police. Bob went to school. Teachers and the principal would have noticed his absence. The police would have started an investigation into how and why this boy went missing, and the gunshots would have immediately made the family a prime suspect

The ending made it look like it was all over: Martin got the sacrifice he wanted, and the family could move on. In reality, at least Steve would have been imprisoned for murder. There was no explanation as to why this didn't happen. The consequence of murdering Bob was just a huge loose end

2. The family's reaction to the death: basically there was none. Kim seemed perfectly happy about everything and smiled at Martin in the end. It would have made sense if she was a sociopath or if she hated her brother. But since she claimed to and acted like she cared about him earlier, why she was so nonchalant about his death made no sense

Same with Anna especially, since Bob was shown as being her favorite throughout the film. There was no explanation for all of their sudden blunted affect. Why did none of the characters act like regular humans? It was either weirdness just for the sake of being weird, or the creators did a poor job of depicting how real people in their right mind would have responded to the whole situation. They all acted like sociopaths or autistic people. It would have been fine if there were some reason for it. But there wasn't, and Martin was supposed to be the only person with mental issues
--SPOILER END--

3. Martin randomly had the power to make people sick and heal them with his mind. It's amazing the amount of reviews saying "it's creepy because it's something that could happen in real life!" Um, no, probably not. Did they miss the very important fact that Martin is apparently some kind of psychic?

That element was just random, since there were no other supernatural elements and no foreshadowing. It just seemed like the creators right at the end were like, "okay, how is this kid going to be able to make these people sick, and then just heal them when he wants to? How would he have access to or know about a poison that does something like this? What poison would have the potential to bring someone to the point of death, and yet be able to be reversed immediately at any point before the person dies?"

"Meh, that's too hard. Let's just give him magic powers instead"

Amazon Customer
5.0 out of 5 stars Dark psychological thriller, dialogue replicates such film. Finish movie. Don't believe all negative reviews.
20 May 2018 - Published on Amazon.com
Verified Purchase
I'm so glad I didn't let the reviews keep me away from watching this movie. I'm a fan of both Colin and Nicole, so of course I've eyed this movie a few times. It's a dark psychological thriller. A little slow in the beginning, but it's building story line. After the movie ended, I understood why the movie was a little slow in the beginning. There comes a point in the movie where the family of 4 are divided and 1 person may or may not die. Getting to know each character in the beginning allows the viewer to root for characters they don't want to see die. I will admit the climax came in half way through the movie, then it fizzled just a bit. The last 25 minutes I grew a little distracted and had to rewind a few parts then finish the movie. I was hoping for a little more action after the climax. The movie slowed again then picked back up the last 5-10 minutes. I recommend watching this movie when you aren't tired, have an open mind to explore the psychological side and finish the movie entirely. Personally, this movie is a type of movie where it can happen in real life, which to me gives me that scary feeling. It's a movie about revenge. Some reviews say the dialogue is weak or the child actors did a poor job. I disagree. This is a type of movie where it's a little lifeless. No barking dog, no laughing children, no feel good feelings. The movie is supposed to be that way and I think all actors did a great job portraying that. A few reviews discuss the menstrual comment in the movie. At first, I thought it was brought up when the family wanted to leave an event and needed an excuse to leave that would leave other guests speechless and accepting to the family's early departure. I also think it may represent a dark mind of doctors, surgeons nonetheless. The menstrual comment is played a few times in the movie. Again, that's the type of movie this is. The enemy is also portrayed to have mental challenges. We know he's unstable. He admits he's from a not nice neighborhood and I think his dialogue portrayed a young boy who came off not so bright, basic, but then later showed a deeper side. Maybe gave off his innocence to the family to make them believe he wasn't so smart to pull of a heist. Happy viewing.
Read more
66 people found this helpful

Colton
4.0 out of 5 stars This and The Lobster are perfect examples of that
17 April 2018 - Published on Amazon.com
Verified Purchase
People are so nit-picky and have no creativity/imagination. This and The Lobster are perfect examples of that. This creator has weird dialogue, unnatural and creepy at times. Almost robotic, but if you could drop your "perfect movie goggles" for a moment, you would see this is intentional and a subtle form of dark comedy. It's a good movie if you like to be creeped out and intrigued by strange characters. Expect that, and you will enjoy this. It's not as good as the Lobster, because I think for that "robotic" personality to work, the world needs to be different from ours.
Read more
37 people found this helpful
Go to Amazon.com to see all 871 reviews 2.5 out of 5 stars
Get FREE delivery with Amazon Prime
Prime members enjoy FREE Delivery and exclusive access to movies, TV shows, music, Kindle e-books, Twitch Prime, and more.
> Get Started
Back to top
Get to Know Us
Make Money with Us
Let Us Help You
And don't forget:
© 1996-2020, Amazon.com, Inc. or its affiliates