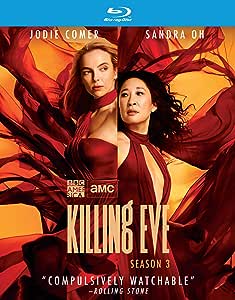 The story of two women with brutal pasts, addicted to each other but now trying desperately to live their lives without their drug of choice. For Villanelle, the assassin without a job, Eve is dead. For Eve, the ex-MI6 operative hiding in plain sight, Villanelle will never find her. All seems fine until a shocking and personal death sets them on a collision course yet again. The journey back to each other will cost both of them friends, family, and allegiances…and perhaps a share of their souls.

Trek Fan..
5.0 out of 5 stars Dam Man i Love Her. in a good Way.
Reviewed in Canada on 17 November 2020
Verified Purchase
For the love of my brain and my heart I don’t think there’s anyone who can play Villanelle (Jodie Comer):
like she does., nada no way at all period. the clothes they give her to wear to make her stand out is incredible.
and the look of what the hell are you trying to prove that I’m normal. no sorry I’m not. I’m laughing right now.
that writing this entry of my happiness that I concluded this third season of “Killing Eve”
but that’s just her. now Eve c’mon now give her some light please. stop making her wear those frumpy clothes
that look like she has no substance to the cause of her work. after all she did work for MI6.
you know that intelligence agency that know their stuff of catching bad guys. please do it for me,
cause if the fourth season is like this I don’t think I’ll watch the fifth if there is any. oh Jodie Comer you’re good.
Runtime 5 Hrs 36 Min. on two discs.
1.78:1
English with some English Subtitles from Russian. 5.1 DTS.

OpenWord
4.0 out of 5 stars Improves as it goes...
Reviewed in the United States on 25 October 2020
Verified Purchase
Season 3 starts out rather slow - there are several BANG! moments in the first few episodes, but despite the shock value, the characters do not start to take action for quite a while. I mean, how many episodes can Eve spend at a restaurant? Okay, we got it, let her get on the case, please. But then, about half way through, there is an episode that really blows the show out of the tedium - this episode, where the titular character does not make an appearance, is the most gripping episode so far in the entire season. One character seems to go through a subtle but complete transformation after this episode, and season itself gets invigorated and leads to a satisfying ending, if somewhat muddled and leaves a lot unanswered. Overall satisfying - I just hope the next season does not take this long to pick up steam.
Read more
Report abuse

Jeff
3.0 out of 5 stars Not down the drain yet, but definitely circling it.
Reviewed in the United States on 16 September 2020
Verified Purchase
With its third season concluded and a pandemic-delayed fourth season waiting for the green light, Eve (Sandra Oh) is still alive and no longer working with MI6. She's making dumplings in a Korean restaurant and trying to patch together a semblance of a life. Meanwhile, her ex-obsession, Villanelle (Emmy-winner Jodie Comer) is in Spain and about to celebrate "her special day" by marrying another woman until the party is crashed by her mentor, Dasha (Harriet Walter) who has shown up to offer the angry assassin a deal to return to kill for The Twelve, the shadowy criminal organization that employs them both.

Under the guidance of Suzanne Heathcote, the new (and third) head writer/showrunner, the third season is a jumbled and overstuffed hot mess of new characters, unfilled plot holes, weird time jumps, unexplained events and simply bad episodes. The laws of time and space are shredded, characters wander in and out to deliver expository dialogue, and worst of all Eve and Villanelle spend less time together than in any other season until the finale.

Coming off her unexpected Emmy win, Jodie Comer does well despite some drab and bizarre clothing and extremely unimaginative and illogical kills (death by tuning fork, anyone?). She doesn't seem entirely present in some scenes. Fiona Shaw as Carolyn Martens, the dodgy MI6 spymaster, is given more opportunity to show her emotional range as family matters and job pressures leave her more vulnerable than ever. Sandra Oh is supposedly the lead character (though she loses top billing on the DVD release to Comer), but Heathcote reduces Eve to supporting character status as she initiates nothing in the season and instead is put in positions where she is constantly reacting to what Villanelle and others are doing.

Oh and the rest of the cast are sidelined entirely for a solo Villanelle episode that stops the show's limited momentum dead in its tracks and in its aftermath, the Russian assassin loses all interest in her work (and Eve as well) while Eve becomes laser focused upon finding her again. Most of Eve's dialogue for the final episodes can be summed up in three words: "Where is she?'

I am a huge fan of Killing Eve, but the bloom is all but off this rose as the women at the heart of the story are mired in a lackluster rut of poorly executed plots (the resolution of the season's biggest mystery is eye-rolling in its badness) and a general sense of "Haven't we done this already?"

Yeah, we have and it was better in Season One and Two than the dreary Season Three. This is a plate of cold and lumpy mashed potatoes and more than a bit disappointing when it isn't simply dull.
Read more

jmsatc
5.0 out of 5 stars 3 Seasons and looking forward to a season 4
Reviewed in the United States on 22 September 2020
Verified Purchase
I purchased the standard dvd version since a blu ray version isn't available yet, or at least not offered for purchase. The quality of both discs is fine... no problems with picture or audio. I received the dvd in the promised time frame. I really like this series and it's characters. Hopefully there will be a fourth season.
Read more
Report abuse
See all reviews
Get FREE delivery with Amazon Prime
Prime members enjoy FREE Delivery and exclusive access to movies, TV shows, music, Kindle e-books, Twitch Prime, and more.
> Get Started
Back to top
Get to Know Us
Make Money with Us
Let Us Help You
And don't forget:
© 1996-2020, Amazon.com, Inc. or its affiliates