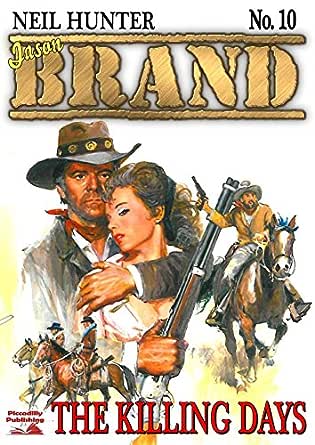 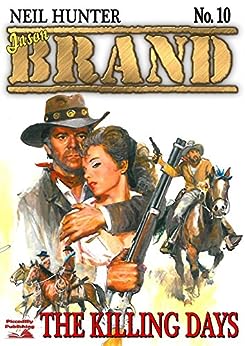 Vital documentation that would help bring a number of crooked Washington politicians and influential businessmen to book was stolen during a violent train robbery. Jason Brand was ordered to get it back – and to bring in the gang responsible. But from the minute he hit the trail, he became a target.
In the killing days that follow, Brand meets violence with violence and leaves a trail of bodies in his wake. But someone’s determined to stop him at any price … and as the spent shell-cases continue piling up, he slowly begins to unravel the complicated deceptions that stand in his way – even to exposing one man he mistakenly believes is on his side!
In the bullet-riddled climax, Brand was going to do his job and no one was going to stop him. But it was going to be a close-run thing. And this time Brand might not walk away from it.

Kindle Customer
5.0 out of 5 stars JASON BRAND ON THE TRAIL
12 January 2018 - Published on Amazon.com
Verified Purchase
Greed,betrayals and men of importance putting money before party and country. That's what Brand, Qualan, Frye all lawmen put their lives in the way to protect the government and its citizens. Kinda of what's going on at the present, money party and country in that order...not good.
But no matter the times, there are defenders of the Constitution of the United States, that will get rid of by exposure and arrest.
Men like Jason Brand and Frank McCord who are portrayal during the building of the United States Government will continue to fight the betrayal of the U.S. Government by those who think they are invincible..
Jason Brand is a FORCE to deal with. Since he has
his son Adam and Virginia Maitland in his life it's all worth it. He has something to look forward to, and not the loneliness that has been his past..

monte
4.0 out of 5 stars BEATEN TO A PULP FICTION
31 March 2016 - Published on Amazon.com
Verified Purchase
I have read this series as well as the Bodie series so obviously I have enjoyed them. In both series in every book the two heroes take such beatings that the amount of violence is disturbing. It is of course predictable that they will survive to fight another day but I don't understand why the author feels this is necessary-I just skip over it. They also absorb stabbings and gun shots. Jason Brand would have more concussions than an NFL quarterback or MMA fighter.
The writing and plots are good enough without beating these two to a pulp and I don't think you would lose any readership.
Read more
One person found this helpful

Kindle Customer
5.0 out of 5 stars Excitement series
25 June 2016 - Published on Amazon.com
Verified Purchase
This story has a great plot, and was exciting from start to finish. All of the stories in this series have been very enjoyable reading. The author has terrific imagination and a great sense of humor.
Read more
One person found this helpful

Kindle Customer
5.0 out of 5 stars The good guy got the horse. I know Jason works for DOJ but what part. Good storyline.
19 March 2016 - Published on Amazon.com
Verified Purchase
Darn good book. Shows how corrupt our government was in those days and unfortunately it hasn't changed much. I blame it on the voters. A person lies and breeches the security of our nation and people vote for them. In this book the bad go
Read more
One person found this helpful

Toothcop
4.0 out of 5 stars Brand is good.
18 June 2016 - Published on Amazon.com
Verified Purchase
Really like the Brand westerns... Just ready to read about Bodie and Brand in San Francisco, just has to be good..
Read more
One person found this helpful
Go to Amazon.com to see all 7 reviews 4.6 out of 5 stars
Get FREE delivery with Amazon Prime
Prime members enjoy FREE Delivery and exclusive access to movies, TV shows, music, Kindle e-books, Twitch Prime, and more.
> Get Started
Back to top
Get to Know Us
Make Money with Us
Let Us Help You
And don't forget:
© 1996-2020, Amazon.com, Inc. or its affiliates