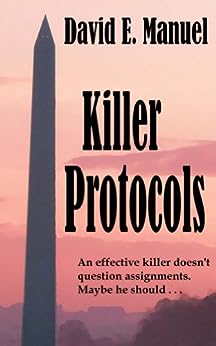 by David Manuel (Author) Format: Kindle Edition
See all formats and editions
Sorry, there was a problem loading this page. Try again.
Richard Paladin works in the shadows eliminating terrorists, spies, and just general riff-raff who threaten the security of the United States. At least, he assumed that's who he'd be killing when he was hired into a secret department of the Environmental Protection Agency. But when one of his "clients" turns out to be a seemingly harmless Missouri housewife, then he's ordered to eliminate the owner of the local northern Virginia bar he frequents, he starts to ask himself a few questions—like what any of this has to do with the U.S. Government's reluctance to sign the Kyoto Protocol. Still, if he can run the gauntlet of spies and goons who keep cropping up unexpectedly, he might just be able to hold onto his job and keep doing what he loves—arranging fatal accidents and suicides. Because Richard Paladin hasn't got a clue what he would do for a living if he loses his job as a government killer.
Read more
Previous page
Next page

David E. Manuel grew up in Houston, Texas and attended the University of Houston, receiving degrees in history and political science. After college, he worked for a few years in the corporate office of an offshore drilling company. In the mid-1980s he moved to the Washington DC area and took a job with the U.S. Government, where he still works. --This text refers to the paperback edition.

pip
5.0 out of 5 stars Protecting the Environment.... one body at a time
Reviewed in the United Kingdom on 29 September 2013
Verified Purchase
Killer Protocol, the first in the Richard Paladin series, is a suspenseful and engaging thriller that keeps you guessing all the way through. The protagonist, Paladin, is a lonely and cynical person, which is probably a good thing as he is a government hit man. So when this hot-blooded assassin's inner humanity begins to force him to question some of the targets being selected for him, the foundations of his life and number of people he can trust starts to wither, forcing him to use all of his skill to tackle the various known and unknown enemies now occupying his world.

Joan Ashley
5.0 out of 5 stars An excellent thriller!
Reviewed in the United States on 25 August 2013
Verified Purchase
I didn't like Richard Paladin. He's a man's man - the testosterone-packed kind who swills beer for breakfast, works up a sweat at the gym, runs miles every day, and has a view of life that's completely opposite to mine. But it stands to reason that Paladin (not being exactly the suave James Bond type) isn't my kind of guy. I'm a woman, though a woman who enjoys a good thriller, and Killer Protocols definitely falls into that category. Notwithstanding my feelings about Paladin, he's a very well flushed out character, unusual for this action-driven genre in which characterization is traditionally sketchy.

Manuel not only does a first-class job in creating well-rounded, believable characters, he paints a superb picture of American life, both through his character's observations and through his meticulous attention to location details. I haven't hung out at the kind of bar Paladin frequents (doubt women would be welcome), but I've stayed in the kind of hotels he stays in, driven on some of those roads, and Emanuel's descriptions of Washington are spot-on.

I'm an environmentalist, so I was particularly interested in Paladin's cover being a job with the Environmental Protection Agency. Except Paladin isn't sure what his job at the EPA entails. This puts him in a sticky position down the line, but that's as much as I'll say about the plot as this is a thriller and it wouldn't do to throw out spoilers. You'll have to read the book and find out what that's all about, and I highly recommend you do. It's a well-written story that not only entertains, but captures aspects of the American culture beautifully. Despite not being head over heels in love with Paladin, I can't wait to see what he'll get up to in the next book of the series.
Read more
3 people found this helpful
Report abuse

Adam Smith
5.0 out of 5 stars Fast paced thriller with unexpected twists and turns.
Reviewed in the United States on 2 January 2021
Verified Purchase
Richard Paladin is not your typical hero or antihero, just another guy trying to make a living as an assassin while working for a government agency. You can’t help but sympathize with him as he moves from one assignment to the next. After all, life is tough and full of challenges that must be overcome. Manuel has written a gem. There are numerous twists and turns that suck the reader into the story of a man we should find abhorrent. The wry sense of humor that Manuel brings to the story allows even the most discriminating of readers to take life a little less seriously. Highly recommended.
Read more
Report abuse

JohnnyApril
5.0 out of 5 stars The Fun Is Back In Reading A Book
Reviewed in the United States on 13 May 2012
Verified Purchase
Okay, the plot of the story is based on Richard Paladin, who is hired by the EPA in a secret part of the government with a mission to kill terrorists and spies. Could be a TV show on the USA Network to join others like Burn Notice for example. Or better yet, something you might see in a novel by Carl Hiaasen. Another novel that I could think of as well is The Ax by Donald Westlake, where the murderer wants to kill off competition so he can get a job.
What makes this novel different and better than the others is Richard Paladin. David Manuel, the author, has the gift of putting Richard in a room and being able to make the story filled with laughs. No matter where Richard is, whether it's the airport, the mall, or watching Fox News and commenting on Bill O'Reilly, my one thought is that he has put the fun back in reading in a big way.
The plot is great and believable, with Paladin being professional in his career choice much like Michael Weston in Burn Notice. He is the ultimate expert in creating the murder and making it an accident at the same time, only adding to the suspense of the story. Wrapping up the story at the end also shows how the author is not only able to tie everything together but also include several surprises as well.
The story is a great blend of comedy, action, and suspense mixed together to make a great read. I really enjoyed this story and look forward to reading more of the series.
Read more
One person found this helpful
Report abuse

CCM
5.0 out of 5 stars Great!
Reviewed in the United States on 10 January 2018
Verified Purchase
I was recently introduced to this author and fell in love with this series. The plot is enticing, the characters engaging and there's enough detail, thought and vocabulary in it , it's hard to put down. Highly recommend!
Read more
One person found this helpful
Report abuse
See all reviews
Report an issue
Does this item contain inappropriate content?
Report
Do you believe that this item violates a copyright?
Report
Does this item contain quality or formatting issues?
Report