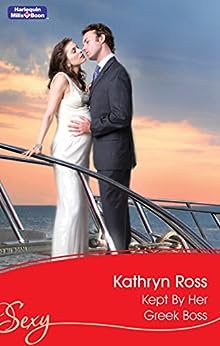 Kept By Her Greek Boss (Taken: At the Boss's Command Book 1) Kindle Edition

by Kathryn Ross (Author) Format: Kindle Edition
See all formats and editions
Sorry, there was a problem loading this page. Try again.

Kept By Her Greek Boss

Businesswoman Katie Connor thinks herself immune to notorious womaniser Alexi Demetri... So when she finds herself falling for him she decides to run. But unbeknownst to her she's carrying a baby that will tie her to the ruthless Greek for ever!

Though Alexi has sworn never to wed again, marry he must to catch his runaway mistress! With the threat of a custody battle, Katie has no choice but to become Alexi's convenient wife. Trouble is, Alexi won't be content until he's possessed her body... and soul!

Kathryn Ross is a professional beauty therapist, but writing is her first love. At thirteen she was editor of her school magazine and wrote a play for a competition, and won. Ten years later she was accepted by Mills & Boon, who were the only publishers she ever approached with her work. Kathryn lives in Lancashire, is married and has inherited two delightful stepsons. She has written over twenty novels now and is still as much in love with writing as ever and never plans to stop.

4.2 out of 5 stars
4.2 out of 5
20 global ratings
How are ratings calculated?
To calculate the overall star rating and percentage breakdown by star, we don’t use a simple average. Instead, our system considers things like how recent a review is and if the reviewer bought the item on Amazon. It also analyses reviews to verify trustworthiness.

pauline mcallister
5.0 out of 5 stars Kept by her Greek boss
Reviewed in the United Kingdom on 6 March 2013
Verified Purchase
Not a bad book but I've read better Not what I expect from mills and boon books hope the next one is better
Read more
Report abuse

paula legate
3.0 out of 5 stars Good book
Reviewed in the United States on 1 December 2020
Verified Purchase
This was a sweet book. I could tell the two cared for one another. The chemistry was steamy. I just wished I would have felt more of a loving connection. At the very end you could tell they loved one another, so they did get their HEA. Just wished I would have felt it a little sooner. She was a strong heroine, but at the same time had a lot of insecurities. Alexi was a strong alpha Greek man. It was nice to see his true feelings come out in the last chapter. This was a good book, but nothing stood out to make this an extra special book. I’ve read several books with this same story line.
Read more
Report abuse

Mammaluvs2read
2.0 out of 5 stars Where was the Love?
Reviewed in the United States on 16 April 2012
Verified Purchase
I really hate giving a bad review but I think in this case I just have to. The characters were completely unlikable. The herione was simpering and whiney with no backbone that gave no regard for herself even after she finds she is pregnant. The hero was a jerk until the last few pages and even then the change in him was so small it was hard to believe. I usually love the possessive Greek persona but that wasnt the case here. This was like emotional toture that almost seemd as if the heroine was a glutton for it.

Sorry but I dont think Ill be looking for more by this author. :-(
Read more
2 people found this helpful
Report abuse
See all reviews
Back to top
Get to Know Us
Make Money with Us
Let Us Help You
And don't forget:
© 1996-2022, Amazon.com, Inc. or its affiliates