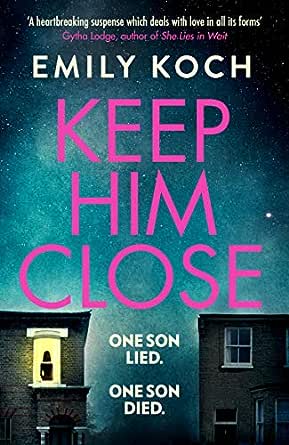 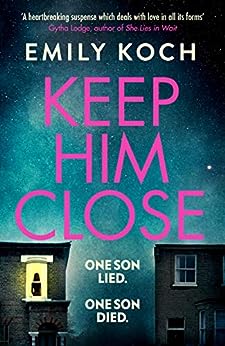 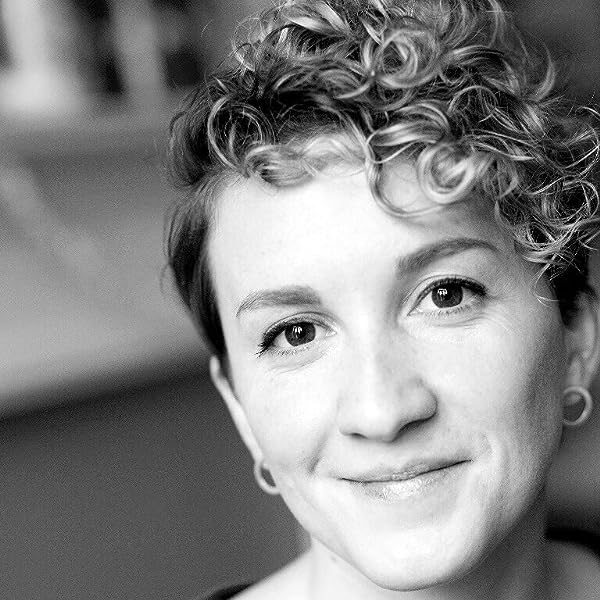 Keep Him Close: A moving and suspenseful mystery for 2021 that you won’t be able to put down Kindle Edition

Keep Him Close was a magnetic, all-consuming read. A heart-breaking suspense which deals with love in all its forms, however it is expressed. ― Gytha Lodge, author of She Lies in Wait

Keep Him Close isn't just a suspenseful mystery about two women's determination to discover the truth about the night that left one of their sons dead. It's also a really well-written, deeply moving and psychologically affecting study of motherhood and heartbreak. Highly recommended. ― Alex Michaelides, author of The Silent Patient

A gripping, dark domestic drama with motherhood at its heart. Beautifully written and emotionally charged, the characters leaped off the page and stayed with me. ― Ruth Mancini, author of In the Blood --This text refers to the hardcover edition.

Alice keeps her identity secret when she befriends the mother of her son's killer. Keep Him Close is a dark psychological drama about love, hate and forgiveness. --This text refers to the hardcover edition.

Emily Koch is an award-winning journalist and graduate of the Bath Spa Creative Writing programme. Her debut novel, If I Die Before I Wake, was shortlisted for the CWA Ian Fleming Steel Dagger award, longlisted for Authors' Club Best First Novel Award, and selected as a Waterstones Thriller of the Month. She lives in Bristol. --This text refers to the hardcover edition.
Read more

That's the catchphrase for Emily Koch's exciting new thriller KEEP HIM CLOSE, a dark domestic psychological mystery drama with a slow burn that builds with a tension that's palpable. I wouldn't call it a thriller as such but there are parts to it that does have a thriller element. I don't generally like slow burns but this is one that keeps your interest despite its slow pace to begin with.

The story opens with a snippet of the event that is clearly at the centre of this dark mystery. The moment is tense with a fear that is palpable. And then it is gone. Leaving readers questioning "what just happened?"

Alice Hyde is single mother of two teenage sons who couldn't be more different from each other. Benny, the eldest, is sweet and gentle and about to start university in Exeter whilst Lou is the troubled younger child who has never given her a moments peace since the day he was born. But Alice loves her boys despite their differences...and the fact that Lou's intimidating behaviour sometimes scares her that she wonders if she'll ever be free of him. She hates that she thinks that of her own son but unlike Benny, Lou knows how to push her buttons.

The opening chapter, after the rather dramatic prologue, Alice is preparing for Benny's departure for university as well as dealing with the growing fractiousness with younger son Lou. The conversation and barbs Lou alludes to whilst dancing over the loft opening, which he knows will provoke his stoic mother, gives readers the opinion that this boy had little or no respect for her. The boy certainly grated on my nerves as Alice herself presented as cold and aloof. Neither of them are completely likable...at first.

When Ben and Lou leave the house that evening for a night on the town, Alice doesn't know it will be the last time she sees her youngest son. Her boys are 18 and 19, old enough to look after themselves and she doesn't worry when they haven't returned by the time she goes to bed that night. But in the early hours when she gets a knock on the door, she knows something is wrong. Police inform her that there had been an incident which has resulted in Lou's death.

When Benny returns home, he is quiet. He says little though he admits to being there but not at the time of Lou's death so he never saw anything. But Alice fears he is hiding something when things don't add up.

Indigo Owen is also a single mother to 19 year old Kane. He was out with Benny and Lou the night of Lou's death and he is riddled with guilt over something Indigo can't quite understand. He breaks down and tells his mother all he knows and she suggests they tell the police. After all, they are piecing together the events of that night to discover what happened to Lou. But little does Indigo know that this step of honesty on her son's part does little to close the chapter on his guilt over that night. After hours of questioning, police then inform her that they are charging Kane with Lou's murder after he confessed to the incident. Indigo is outraged. She knows her son and she knows he is innocent.

Both Alice and Indigo are desperate to uncover what really happened on that tragic night. Two very different women who, after a chance meeting, unite to find out the truth in the midst of secrets. What will they uncover? Who else was there that night Lou fell to his death? What did they see, if anything? And why, if he is innocent, did Kane confess to killing Lou? Is he protecting someone? If so, who? And Benny - what is he hiding? He certainly seems to know more than what he's letting on.

Alice and Indigo believe they know their boys...but do they really?

A very different type of psychological thriller blended with taut domestic drama that is both dark and tense throughout, KEEP HIM CLOSE is a thought provoking and emotional read. Although it is a slow burn, it is addictive in its tension and powerful emotion. As the story unfolds and the truth slowly emerges, a light is finally cast on the shadow of doubt surrounding that fateful night.

Told primarily from Alice and Indigo's perspectives throughout, readers are also given a short glimpse from the other players on the night in question - Benny, Kane and even Lou himself. These chapters are equally revealing as well as adding to the mystery. A very cleverly written story, KEEP HIM CLOSE is not fast paced or even action packed, but it is addictive with an underlying suspense that will keep the reader hooked to the very last page.

I would like to thank #EmilyKoch, #NetGalley and #RandomHouseUK and #VintagePublishing for an ARC of #KeepHimClose in exchange for an honest review.
Read more
Helpful
Report abuse
See all reviews

LynneK
5.0 out of 5 stars A heartbreaking yet thrilling read
Reviewed in the United Kingdom on 23 June 2020
Verified Purchase
Having read and enjoyed Emily Koch's debut book If I die before I wake, I was really looking forward to this one being released. I was certainly not disappointed.
The story being told by both mothers - one whose son died and one whose son lied - really made you feel for each character.
It told the story of relationships between mothers and their children beautifully and was such a sad, heartbreaking read at times.
I very much recommend this book!
Read more
11 people found this helpful
Report abuse

V. O'Regan
3.0 out of 5 stars A slow burn domestic drama
Reviewed in the United Kingdom on 22 March 2020
Verified Purchase
Alice Hyde’s son is dead and Indigo Owen’s son has been accused of his murder. Indigo is determined to prove that her beloved Kane is innocent.

While searching for evidence to clear his name, she is helped by a woman who takes an interest in her situation. Yet Indigo doesn’t realise that her new friend has her own agenda. Yes, it’s Alice!

Alice’s reasons for this deception are fairly straightforward given that she is seeking to understand why her son died. There are a fair few shady characters on the fringes of the women’s investigation and a few twists.

This is another novel that uses the format of switching between characters’ perspectives. Thankfully, it mainly is just Alice and Indigo so not as confusing as some I have read.

I felt that primarily this was a domestic drama exploring elements of motherhood rather than a thriller even if a crime is at the heart of its plot.

Nothing at all wrong with that but I just don’t find this kind of novel particularly engages my attention. So it proved rather slow going for me.

Terri
1.0 out of 5 stars Rubbish
Reviewed in the United Kingdom on 21 March 2020
Verified Purchase
Long drawn out story with a weak ending - I really don’t understand the 4 and 5 star reviews. I am heartily sick of wasting money on books based on reviews only to find they are rubbish.
Read more
4 people found this helpful
Report abuse

Louise886
4.0 out of 5 stars Slow burn
Reviewed in the United Kingdom on 5 April 2020
Verified Purchase
Lou goes out with his brother Benny and his friends. Somehow he falls to his death off a parking garage. Kane is arrested first his murder.

Lou’s mother Alice and Kane’s mother Indigo become friends and try to figure out the truth of what happened on that fateful night.

I liked the character development and enjoyed the story. I found it a little slow in places but very interesting overall.
Read more
One person found this helpful
Report abuse
See all reviews
Back to top
Get to Know Us
Make Money with Us
Let Us Help You
And don't forget:
© 1996-2021, Amazon.com, Inc. or its affiliates