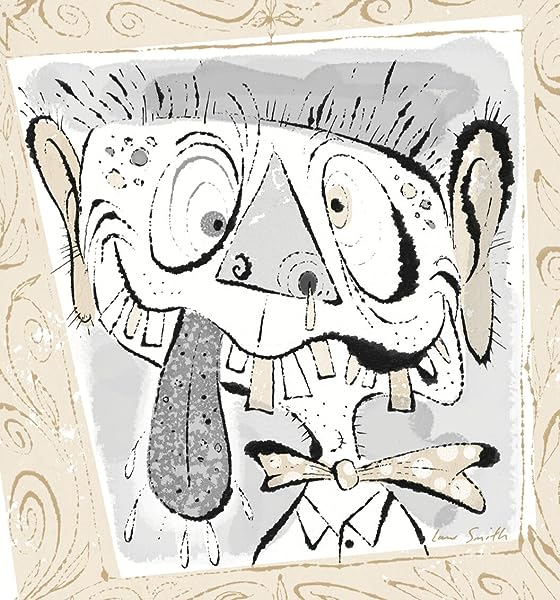 I'm Just No Good at Rhyming: And Other Nonsense for Mischievous Kids and Immature Grown-Ups Hardcover – 26 September 2017

by Chris Harris (Author), Lane Smith (Illustrator)
4.7 out of 5 stars 260 ratings
See all formats and editions
Sorry, there was a problem loading this page. Try again.

I'm Just No Good at Rhyming: And Other Nonsense for Mischievous Kids and Immature Grown-Ups
$38.90
(260)
Usually dispatched within 4 to 5 days.

Praise for I'm Just No Good at Rhyming: And Other Nonsense for Mischievous Kids and Immature Grown-Ups


*"A frolicking romp through the zany world of nonsense verse.... Visual, aural, and downright guffaw-inspiring puns and riddles abound in this wildly imaginative and cleverly illustrated debut collection. The inspired and inspiring sense of play knows no bounds."
--Kirkus Reviews, starred review


*"A magnificently wacky romp through verse... This moving, madcap anthem to language is sure to stand the test of time."
--Booklist, starred review


*"Hits a poetry trifecta: high energy, rhymes that can rival Cole Porter's, and a torrent of ideas...a worthy heir to Silverstein, Seuss, and even Ogden Nash."
--Publishers Weekly, starred review


*"There's not a dud in the bunch."
--The Horn Book, starred review


*"Those who claim to hate poetry will enjoy this riotous compilation.... A surefire winner for reading aloud or for snickering with under the covers."
--School Library Journal, starred review


"Funniest book of the year for kids? Gosh, there's a lot of competition out there but...YES, YES, ALL RIGHT, YOU GOT ME! This is probably the funniest book of 2017 for kids."
--Betsy Bird, A Fuse #8 Production


"It's a veritable sundae of delights-layers of puns, word games, visual jokes-that I honestly would give to any kid ages short to tall." --NPR's Book Concierge


"This inspired collection of nonsense verse from the executive producer of How I Met Your Mother showcases a rare gift for wacky wordplay."--People

"This Hollywood writer and award-winning illustrator might just make all of us--the kids and the grown-ups--smile again."--The New York Times

Chris Harris was a writer and executive producer for shows such as How I Met Your Mother and a writer for The Late Show with David Letterman. His pieces have appeared in The New Yorker, Esquire, ESPN, The New York Times, The Wall Street Journal, and on NPR. He was also the author of the anti-travel guide Don't Go Europe! He lives in Los Angeles. Lane Smith wrote and illustrated Grandpa Green, which was a 2012 Caldecott Honor book, and It's a Book, which has been translated into more than twenty-five languages. His other works include the national bestsellers Madam President and John, Paul, George & Ben, the Caldecott Honor winner The Stinky Cheese Man, and The True Story of the 3 Little Pigs, among many others. His books have been New York Times Best Illustrated Books on four occasions. Lane and his wife, book designer Molly Leach, live in rural Connecticut.
Tell the Publisher!
I’d like to read this book on Kindle

4.7 out of 5 stars
4.7 out of 5
260 global ratings
How are ratings calculated?
To calculate the overall star rating and percentage breakdown by star, we don’t use a simple average. Instead, our system considers things like how recent a review is and if the reviewer bought the item on Amazon. It also analyses reviews to verify trustworthiness.

Yorkie74
5.0 out of 5 stars Great book for kids and parents to enjoy together
Reviewed in the United Kingdom on 16 June 2018
Verified Purchase
Ive been reading this with my 6 and 10 year old girls and they absolutely love it! Some of the poems and rhymes are little above the youngest s understanding, but I’m sure this is a book we’ll return to again and again when she’s older.
Read more
Report abuse

OrfenOrfenOrfen
5.0 out of 5 stars If you loved 'Magic Roundabout', you'll love this
Reviewed in the United Kingdom on 2 May 2018
Verified Purchase
Terrific book for both adults and children alike. Although I suspect that younger children may take some time to 'get it'.
Read more
Report abuse

Amazon Customer
5.0 out of 5 stars Bought for my son - happy boy
Reviewed in the United Kingdom on 29 October 2018
Verified Purchase
Bought for my son (9) - he loves it
Read more
Report abuse

Kindle Customer
5.0 out of 5 stars Laughed so hard we cried!
Reviewed in Canada on 15 July 2019
Verified Purchase
This is one of the funniest poetry books we have ever read! Our whole family loves it! The first time we read it we laughed so hard we had tears running down our faces and could hardly read it aloud! When friends come over our kids pull it out to read their favourites to them! Its fantastic! Avocado!
Read more
Report abuse
See all reviews
Back to top
Get to Know Us
Make Money with Us
Let Us Help You
And don't forget:
© 1996-2021, Amazon.com, Inc. or its affiliates