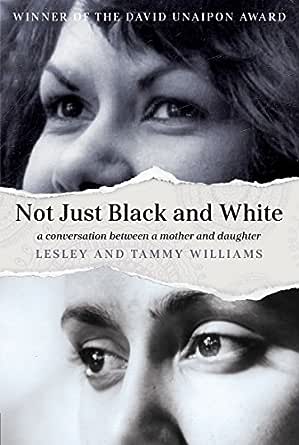 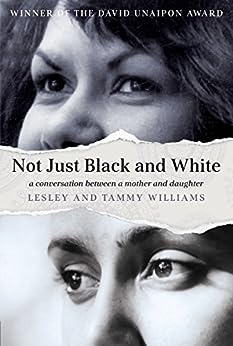 Lesley Williams is forced to leave Cherbourg Aboriginal Settlement and her family at a young age to work as a domestic servant. Apart from a bit of pocket money, Lesley never sees her wages – they are kept ‘safe’ for her and for countless others just like her. She is taught not to question her life, until desperation makes her start to wonder, where is all that money she earned? So begins a nine-year journey for answers which will test every ounce of her resolve. Inspired by her mother’s quest, a teenage Tammy Williams enters a national writing competition. The winning prize takes Tammy and Lesley to Michael Jackson’s Neverland Ranch and ultimately to the United Nations in Geneva. Told with honesty and humor, Not Just Black and White is an extraordinary memoir about two women determined to make sure history is not forgotten.

Lesley Williams is a respected Murri (Aboriginal) Elder. She is best known for instigating the domestic and international Justice for Aboriginal Workers campaign. In 2003 she was awarded the Centenary Medal for her distinguished services to the Aboriginal and Torres Strait Islander community. Lesley has co-produced and consulted on a number of documentary films including "The Ration Shed" and "For Their Own Good," and co-wrote "On The Banks of the Barambah: A History of Cherbourg." Tammy Williams is a Murri woman and was admitted as a barrister in 2002. Tammy was profiled in the documentary "Black Chicks Talking" and in 2011 was included in the International Women s Day Power of 100 a list of one hundred women who have helped to shape Australia."
click to open popover

Robyn D
4.0 out of 5 stars Inspirational Book
Reviewed in Australia on 30 October 2016
Format: Kindle EditionVerified Purchase
Amazing story of a womans struggle to achieve equality and acknowledgement not only for herself but indigenous people her generation! I loved her courage , honesty, compassion and commitment to her family.
Read more
2 people found this helpful
Helpful
Comment Report abuse
See all reviews from Australia

Andrew O'Keeffe
5.0 out of 5 stars Super book - Wonderful that mother and daughter have told their story
Reviewed in the United States on 8 November 2015
Format: Kindle EditionVerified Purchase
This is both a wonderful memoir and an important historical book. As a memoir, the story is moving and inspiring how one person, mother Lesley, is able to rise above what her situation might have destined for her, and to inspire her children to better quality and confident lives. Lesley is one special person. As an historical book, how many Australians are like me, having no idea of the degree of suppression of indigenous people (growing up about the same time I did). It will be an inspiring movie one day. The book is a wonderful book and very highly recommended.
Read more
One person found this helpful
Helpful
Sending feedback...
Thank you for your feedback.
Sorry, we failed to record your vote. Please try again
Report abuse

Lucy
5.0 out of 5 stars A beautiful, challenging
Reviewed in the United States on 14 September 2015
Format: Kindle EditionVerified Purchase
Quite a life changing book. A beautiful, challenging, enlightening and uplifting memoir. The writing is very clear and fluid, yet still captures the authors' voices.
Read more
One person found this helpful
Helpful
Sending feedback...
Thank you for your feedback.
Sorry, we failed to record your vote. Please try again
Report abuse