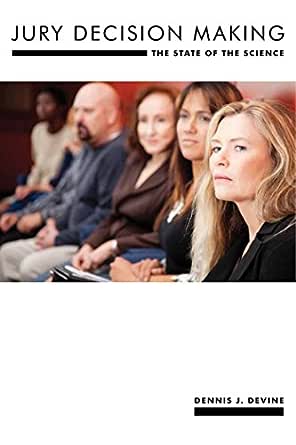 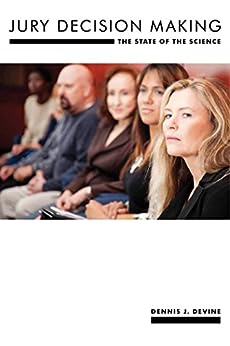 "The book can be a good classroom introduction to this body of research and to rigorous research generally."-Choice "A lucid, sure-footed tour of the unwieldy research literature on jurors and juries. In addition to offering fresh insights into past research, Devine proposes an ambitious agenda for future research. His integrative theory of jury decision making has the potential to generate much-needed new research and to reveal unnoticed connections between seemingly unrelated findings. Essential reading for both scholars and students."-Mark Costanzo,Professor of Psychology, Claremont McKenna College "Devine's book is most useful for those conducting research on juries. Any social scientist considering conducting studies on juries would benefit from the book."-Criminal Law Bulletin "The book provides a rich and elegant explanation of what we observe in our own jury research and hear jurors describe in post-trial interviews. Those who want a better grasp of jury decision-making will find what they are looking for in this book."-Susan Macpherson,Vice President of the Minneapolis office of NJP Litigation Consulting "Add this book to the list of milestones in the study of jury decision making. Not only has Dennis Devine provided an impressively comprehensive review of scholarly research on the question of how jurors and juries make decisions, he also offers a theory that ties the findings together, and does it all in an eminently readable way." -Edie Greene,University of Colorado at Colorado Springs --This text refers to an out of print or unavailable edition of this title.

Dennis J. Devine is Associate Professor in the Department of Psychology at Indiana University-Purdue University Indianapolis. His work has been published in numerous professional journals, including Law and Human Behavior; Psychology, Public Policy, and Law; Journal of Empirical Legal Studies; and Journal of Applied Social Psychology. --This text refers to an out of print or unavailable edition of this title.

marie
5.0 out of 5 stars excellent book
Reviewed in the United Kingdom on 6 June 2013
Verified Purchase
Excellent book with excellent research, I would highly recommend to any students or teachers or those that have an interest in this area but probably most suited to students and teachers
Read more
Report abuse

Bill Wagner
5.0 out of 5 stars What one lawyer says to the rest.
Reviewed in the United States on 4 April 2013
Verified Purchase
A while back I gave you a suggestion that you consider buying a book titled "Jury Decision Making; The State of the Science." by Dennis J. Devine. I explained that it was a scientific study of scientific studies conducted on how juries work. I was stunned at the number of studies that were felt to be scientifically worth at least partial reliance upon. (None were published in Trial Magazine). The book even suggested why some studies perhaps had partial flaws and should not be relied upon outside certain perimeters.

I renew the suggestion that you get the book (Cheap on Amazon Kindle). It is great ... and helpful to all. I was asked by several to report when I had completed the book. I have completed it and this is my report.

FIRST: If would be helpful ONLY IF you are really going to spend much time actually submitting cases to a jury.
SECOND: By far the greatest number of "good" studies deal with Criminal Law. It is almost required reading for lawyers that frequently go to a jury in a criminal case.
THIRD: It has great resources to cite to judges considering problems such as bifurcation, joinder, pre-trial publicity, and "how to handle inadmissible evidence." All of the cited studies are identified so they can be researched.
LAST: Here is an example of some of the "conclusions" which the author offers with the caution that some are "indicated" but reliance must be cautioned because of lack of enough scientific research and the ever present concept of "it depends." There are many more relating to Criminal Law than Civil Law. These I give are more important in Civil Law.
a. Telling a Story. Early on it is of benefit to "tell a story." This can be true as early as Voir Dire, but is especially true in opening statement and order of proof. It should also be considered when planning the outline of a proposed final argument. If the juror has in mind a "story" the first witness will be "fitted" into the story if possible, OR rejected as not "fitting". Warnings are given by the author in defining what it means "telling a story." Example: "Overall concept" is more helpful than details and chronological better that highlights.
b. Evidence: Juries can more likely believe something if they can picture it in their mind as they hear about it. Pictures, drawings, or comparison with everyday "things" and the like are helpful. (This is helpful if the court allows and it works best where each juror has their own little computer. Such also allows questions from a juror without contamination of other jurors.)
c. Inadmissible Evidence. The studies indicate that instructions by a judge to "disregard" are seldom of much value, and may even aggravate the problem. An explanation by the judge of "why" it should be disregarded can provide some help sometimes. The author recognizes that sometimes the evidence is heard by mistake, and that you can't mistrial every case. The author suggests that if the lawyer is involved, a mistrial is clearly better than letting the lawyer get away with it. The author even suggests that "punishment" should be such that the lawyer (and other lawyers) fear what might happen if inadmissible evidence is heard and over time will reduce the problem. An "advance" warning to a witness of possible punitive result if something is mentioned is suggested.
d. Early instructions seem to help. Cautionary instructions during trial seem to help jury understanding. An instruction just before an expert testifies about the limitations on expert testimony is a suggestion. Apparently some courts are now giving a standard instruction explaining the limitations on eye witness credibility (not a lie, just a mistake) sometimes before the witness testifies. Early testing suggests it is a good idea (It is called a Talfaire Instruction when dealing with eye witness testimony). This is especially recommended in criminal cases in which there is only one eye witness.
e. Juries consider out of court experiences no matter what we tell them. That is why factual information about the jury is important, and why pre-trial publicity of current events has an effect even if the event is not about the case itself.
f. Allowing a jury to deliberate during trial has not been tested very much and there are conclusions for and against the process. Testing continues.
g. Studies indicate that even the concept of a "peremptory challenge" is questionable (WOW).

scbillin
5.0 out of 5 stars Possibly the most readable book involving science ever!
Reviewed in the United States on 3 October 2012
Verified Purchase
This book is full of interesting information about juries. It covers the history in the field, the prominent theories, and all the current research and what it all means. This book offers an all encompassing look inside the science of jury decision making. While being an invaluable tool for judges and attorneys it is also an extremely readable text for anyone that has, or will, serve on a jury. The science is presented in a way that will satisfy the most Curmudgeoned of scientists, but also offers explanations that any person can understand.

I would strongly recommend this book to anyone in the legal field as an invaluable tool in the struggle to understand why juries do what they do. I would also recommend this to anyone interested in the legal system or the decision making of small groups in general. Expertly written, this is truly an import work in the field of social science while remaining a great read for the lay person.
Read more
One person found this helpful
Report abuse

Mastomasfx
5.0 out of 5 stars WHY JURIES MAKE THE DECISIONS THEY DO
Reviewed in the United States on 25 November 2013
Verified Purchase
EXCELLENT BOOK ILLUMINATING I AM NOT A LAWYER BUT FOR GRADUATE SCHOOL NEED TO WRITE ESSAYS ON JURIES TRIAL PROCESS. THIS BOOK IS EXCELLENT AS IT PROBES THE DEPTHS OF THE PROCESS. TECHNICAL AND NOT TRITE. RECOMMEND
Read more
Report abuse
See all reviews
Back to top
Get to Know Us
Make Money with Us
Let Us Help You
And don't forget:
© 1996-2021, Amazon.com, Inc. or its affiliates