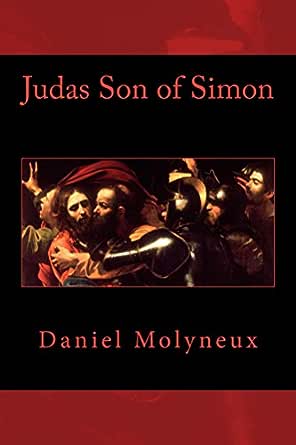 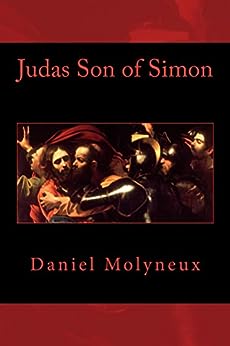 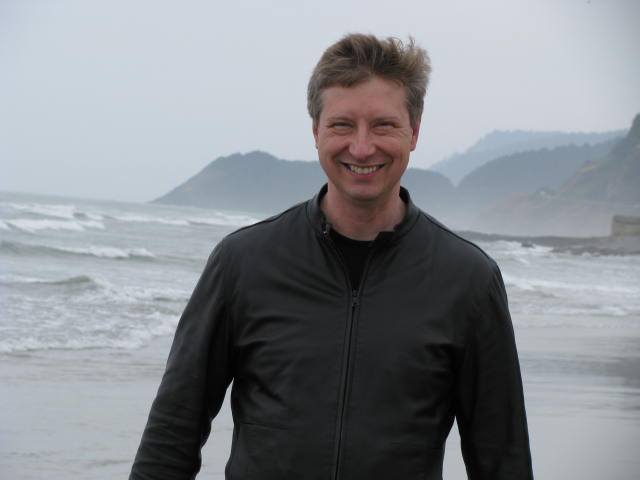 "In Molyneux's skillful hands, the story comes alive in a new way that humanizes Judas and provides insight into the life of Jesus...Emotionally intense and intricately plotted, this provocative novel profiles Judas in unexpected ways." - Library Journal

Rome is waging a "culture war" against all things Jewish, seeking to wipe away Israelite identity, culture, and faith. Revolt simmers in Judea and Galilee, as common Israelites chafe under Roman rule. Conflict rages between the various Jewish parties. Plots swirl in the palaces of Pilate, Antipas, and Caiaphas, as they struggle to maintain their tenuous grip on power, worried that Jesus will lead the people to revolt against Roman rule.

The most influential and educated of Jesus' disciples is Judas Iscariot. Israel is a thriving economic engine of wealth. Nazareth is a suburb of Galilee's capital. Capernaum is a center of learning, taxation, and trade, on the world's most important highway. Each chapter of Judas Son of Simon reveals new and starling surprises about Jesus, his disciples, and first-century Israel. Think you know about Judas' death? You don't!

Christian and Hebrew Scriptures provide the foundation for Judas Son of Simon, supplemented by the writings of Josephus, and numerous ancient and archeological sources. Join Judas, and the other disciples, on their perplexing spiritual journey. As you do, your understanding of Jesus, will be transformed.

DANIEL MOLYNEUX has a master's degree from Austin Seminary; a doctorate from Fuller Seminary; and has done post-graduate studies at Concordia Seminary. He also has a B.A. in Drama from Rocky Mountain College; and studied at London's Royal Academy of Dramatic Art. Daniel is the pastor of Trinity Lutheran Church, in Fairfield, California. Molyneux's first book was the historical novella, THE ANGEL OF ANTIOCH; his second was a companion book, ELIAS PROVERBS.
click to open popover

David Styles
3.0 out of 5 stars A book of paradoxes
4 April 2017 - Published on Amazon.com
Verified Purchase
This book is clearly very well-researched, which is something I greatly appreciate in historical or pseudo-historical fiction, and yet it veers willfully away from agreed-upon historical fact (and acknowledges its fictional nature).

It’s obvious it’s had a lot of time and effort put into it, and yet it has spelling and punctuation errors all the way through from chapter one, page one (“But restful sleep was allusive”) to the last page of the last chapter (a missing space). We all make typos, but to have quite so many suggests the book didn’t get a single proofreading.

It’s a great insight into the world of that time, with a lot of expository dialogue, and yet it breaks away from that immersion with such things as converting various amounts and denominations of money into US dollars, which is quite a jarring fourth wall break.

The feel and style of the book is very much biblical, and this could very well have been another “Gospel according to Judas”. This has its pros and its cons; it benefits from tapping into the pre-existing notions that most readers will have of that world from their own reading of the Christian bible, and thus adding a little magic to the book that otherwise might not have been there — but on the downside, the bible is the way it is because it was written in pieces, shuffled, translated, retranslated, edited, translated again, edited again, and so forth for nearly two thousand years, which results in some clunky and repetitive prose, and very stilted dialogue. It’s not something an author would usually do deliberately, so Molyneux’s decision to do so here was certainly a bold one that I may not have taken myself.

All in all, I found the book a little over-ambitious, but that could be in part because I’m not part of that world (ie, not Christian), and there are certainly some reader biases to be expected.
Read more
2 people found this helpful

Ian J. Miller
3.0 out of 5 stars Promising, but disappointing.
25 March 2017 - Published on Amazon.com
Verified Purchase
This book covers the ministry of Jesus through the eyes of Judas, and also how Judas got to be in that position; specifically he was requested by Caiaphas to gather information on this emerging religious leader. The book has a superb background from the Jewish point of view, and paints an excellent picture of what life in Israel was like at the time. I have also written a novel about a slightly later view of this time, and I know how much research was put into this. I am less convinced about the Roman point of view, which, admittedly, is ignored most of the time, but does come to the fore when Pilate comes into the picture. The book gives a very detailed account of what Jesus did, at least in the last year or so of his life. He explains clearly why Caiaphas felt that Jesus was such a problem, and he offers the point of view that it was not Jesus himself that was the problem. That is genuinely informative and most people will not know of it. He also offers an alternative interpretation of Pilate's role. (I am less convinced of this, but perhaps I am biased because I offered a different interpretation.) So, overall, from this point of view, the book was excellent. However, there were aspects that disappointed me.
The first was the accounts of what Jesus did. This was told, almost as if by a preacher. There was no atmosphere about them. I know that is difficult, but the author elected to take up the challenge. This led to the next point. Jesus did a number of miracles, so what did the disciples do? They tended to argue about classification, e.g. whether Jesus was more like a Pharisee or an Essene. Surely when you see the impossible performed there would be a more emotional response? The next problem for me is that Jesus "explained" things to his disciples, but the explanations were more conundrums. The disciples seemingly never understood, and this is a problem because if Jesus wanted to found a religion, surely he would ensure his message was clear to those who wanted to listen. However, for me, the biggest disappointment was the thinking of Judas, especially at the end. Jesus told him he would betray him, several times. Such a "betrayal" was required by the prophesies, and if it did not happen, Jesus could not be the Messiah. If God required it, how could it be a betrayal? Even if you take the view that Judas was really evil, why would Judas believe that? He had, after all, convinced himself that Caiaphas was right, and however you interpreted it, Israel would be better off with Jesus being arrested.
Finally, while I am usually very tolerant of flawed editing, this book goes too far. When one character has her name spelled differently in the same paragraph, one questions how well the book was read. There were many examples where words were left out, and there were even some howlers. Two examples: Judas, after getting married, "was excused pubic duties". Hmmm. Anyone for "public duties"? Then, if you slap a Roman, you receive "a kick to the groan". Admittedly, these are amusing, but . . . To summarise, an ambitious undertaking with an excellent background, but the foreground needs improvement.
Read more
One person found this helpful

Sky Rae
4.0 out of 5 stars A Gripping Historical Drama
25 March 2017 - Published on Amazon.com
Verified Purchase
Judas Son of Simon is a unique exploration of one of history’s most infamous villains, Judas Iscariot, the man who betrayed Christ with a kiss.. While the story is dramatized and Molyneux imagines the life and personality of Judas, the novel itself is very well researched and clearly written. It is obvious that Molyneux has done his homework. In fact, I was so impressed with the historical knowledge and detail of the book that I looked up the biography of Molyneux and learned that he has a masters and doctoral degree from two well respected seminaries. Molyneux is careful to tell a biblically accurate story (within the parameters of a novel) but to provide the necessary drama needed to keep the pages turning. He succeeds admirably.

The one drawback of the story for me was that there was simply too much exposition of the history and culture of ancient Palestine at the expense of the plot and storyline, especially early on. Much of the first 10% of the kindle edition read more like a history book than a novel. But still, Molyneux has a great story to tell and the action picks up the pace. I’m definitely going to keep my eye out for other books by Molyneux.
Read more
Go to Amazon.com to see all 20 reviews 4.3 out of 5 stars
Get FREE delivery with Amazon Prime
Prime members enjoy FREE Delivery and exclusive access to movies, TV shows, music, Kindle e-books, Twitch Prime, and more.
> Get Started
Back to top
Get to Know Us
Make Money with Us
Let Us Help You
And don't forget:
© 1996-2020, Amazon.com, Inc. or its affiliates