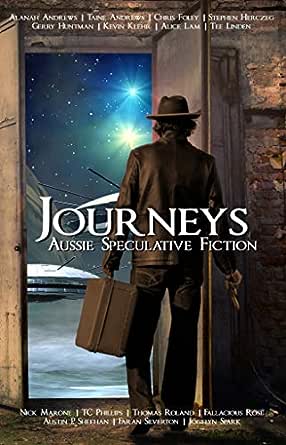 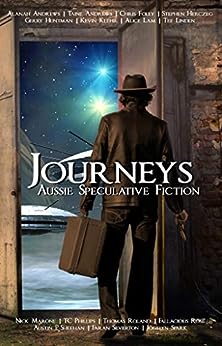 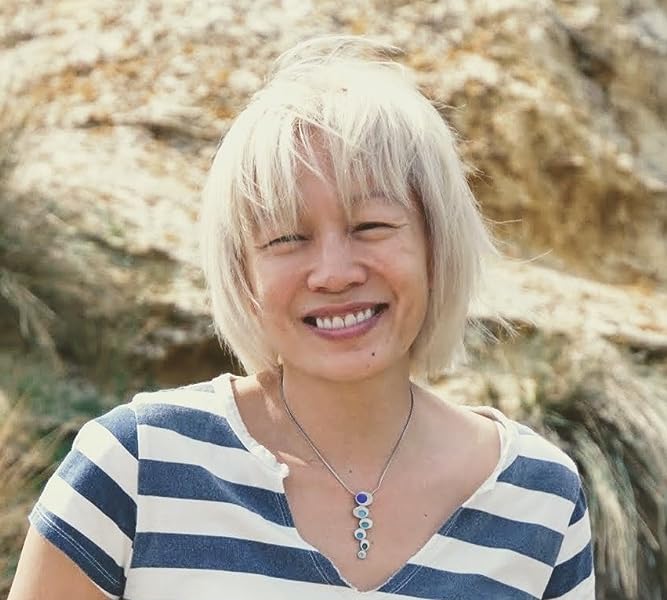 What games do the dead play?

Can the ambassador negotiate peace with a hostile alien race?

Why is Rae so terrified of a letter from the 'Next Chapter' Department of Lebensqualitat?

P.A. Mason
5.0 out of 5 stars Showcasing Australian authors each with fresh ideas
25 December 2019
Format: Kindle EditionVerified Purchase
A fantastic collection of stories by Australian authors, each of them taking us on their own version of a journey from here up into the stars. Highly recommend.
Read more
Helpful
Comment Report abuse
See all 1 customer reviews
Write a customer review

Tin Minute Book Reviews
3.0 out of 5 stars Wonderful Speculative Fiction, Not Locale Specific
13 December 2019 - Published on Amazon.com
Format: Kindle EditionVerified Purchase
Journeys was my first dance with anything specifically dealing with Australian based speculative fiction. Although the stories themselves were engaging and interesting, nothing about them really screamed Australia to me. Perhaps it's because I was born and raised in America, and have been inundated with pop cultural references that were meant to portray Australia. Either way, aside from a few stories directly stating their locations, there were no obvious markers that many of these stories were taking place in or around Australia. This, I guess, is both good and bad.

It's good in the way that the characters and settings remain relatable. Aside from the mention of an 'English Breakfast ' and 'barbie' a few times, there is no use of terms that would not be readily understandable to the non-Aussie eye/ear. Whether the short story was based in the distant future, troubled past, or newly imagined alternate universe, all settings and characters remained easily transferable to the reader. Without issue or effort, I was able to interject myself into each story.

The bad. Although I was transported to different worlds, times, and situations, I never went to the featured destination. Australia. Even though certain towns/cities known to be in Australia were at times mentioned, I never FELT like I was taken there. This isn't necessarily a bad thing in and of itself, but the title says Australia right in it. Through my reading, I wanted to go there, but was never transported.

Overall, it was a good anthology and you will enjoy it too if you're not expressly looking for themes of Australia in your reading.

Lebensqualität - Alice Lam
Imagine a government where retirement has a totally different meaning. In Lebensqualität one retires at sixty, no exceptions. It is Rae’s sixtieth birthday, time for her to move on. Her beloved husband moved on five years ago, and Rae is lonely. He promised to be waiting. She hopes they will be united at last.

In the meantime, she will spend the evening with their two sons. She prepared their favorite meal with her husband’s favorite cake for dessert. They won’t discuss her leaving, of course they won’t, despite the whispers between them.

Into the Sea - Fallacious Rose
Imagine a future where science has banished death. All body parts are replaceable though some may now be plastic and metal. What could you accomplish with eternal life? If you could choose to live forever, would you?

In Philippe and Portia’s time mankind has a cure for everything, except bad dreams! Lately when Philippe does sleep, his dreams grant him no rest. The dream is always the same, a beautiful choir of voices calling him to the sea, to at last lay down his long life. It haunts him during his waking hours. Philippe had no desire to die, of course not, but he can’t help returning again and again to that choir and its song. Portia’s solution is sleeping tablets, but Philippe can’t refuse the dream.

When instead of the address he had planned to give at the United Nations, he describes his dreams, there is an uproar. God was banished; replaced with science long ago. Where can the dream originate? Will others head the call? Will Philippe?

Come to the sea! Lay your weary soul to rest!

Chasing the Wind – T. C. Phillips
Do you believe in an afterlife? What happens when you die? Can you still be tied to the living?

Michael is an explosives expert. Funny then that his death comes at the hands of a sniper. Dying, his last thoughts are of his wife, Sarah, and their unborn daughter. His regrets? That he will never have the chance to know her.

As Michael is dying, Sarah is giving birth. There is such a severe storm, the birthing room shakes, losing power for a moment. What she sees at the foot of her bed in that flash is the bomb dog who had been Michael’s partner until a land mine took his life.

When Michael awakens after death, it is his dog that greets him. At the dog’s urging, Michael begins the journey forward to his new reality. Oddly, his daughter, Michelle also seems connected to this dog she never met. She draws him and her father together when she is just a child. She sees the dog at pivotal points in her life.

Is there a connection between Michael and Michelle through this ghostly creature?

I was gifted a copy of this book and am voluntarily leaving a review.

Read more
Go to Amazon.com to see all 2 reviews 4.0 out of 5 stars
Get FREE delivery with Amazon Prime
Prime members enjoy FREE Delivery and exclusive access to movies, TV shows, music, Kindle e-books, Twitch Prime, and more.
> Get Started
Back to top
Get to Know Us
Make Money with Us
Let Us Help You
And don't forget:
© 1996-2020, Amazon.com, Inc. or its affiliates