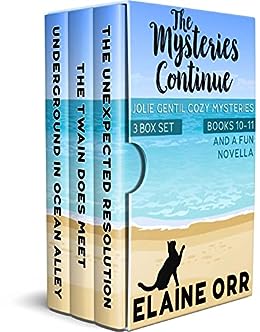 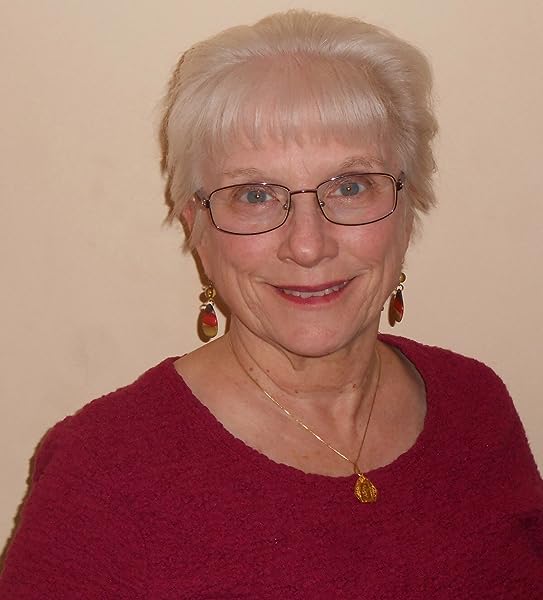 by Elaine L Orr (Author) Format: Kindle Edition
See all formats and editions
Sorry, there was a problem loading this page. Try again.
The Mysteries Continue

Life goes on in Ocean Alley, but change is underfoot.

Unexpected Resolution opens with a surprise guest at Jolie and Scoobie's wedding, and an unidentified body in the Ocean Alley Hospital emergency room. Jolie has to help Scoobie dig through family skeletons -- and solve a murder..

The Twain Does Meet is a novella that relays the story of Jolie and Scoobie becoming parents. While there is lots to discover, it's not a traditional cozy mystery. It didn't seem right to combine such a joyous even with a corpse. In fact, it's called it a Jolie and Scoobie novella.

The series moves ahead three years with Underground in Ocean Alley. As a mom of toddlers, Jolie Gentil has sworn off butting into other people’s business. To those who know her, it sounds as far-fetched as finding used bubble gum on Mars. Nothing could drag Jolie into solving crimes. And then a request for help comes from the most unlikely source...

Elaine L. Orr authors four mystery series, including the eleven-book Jolie Gentil cozy mystery series, which is set at the Jersey shore. "Behind the Walls" was a finalist for the 2014 Chanticleer Mystery and Mayhem Awards. First in her three-book River's Edge mystery series was "From Newsprint to Footprints," followed by "Demise of a Devious Neighbor." Iowa nice meets murder. The second River's Edge book was a Chanticleer finalist in 2017.

Small-town Illinois is the site for the Logland Series -- "Tip a Hat to Murder," "Final Cycle," and "Final Operation." This series features Police Chief Elizabeth Friedman -- a police procedural with a cozy feel. The Western Maryland mountains host the Family History Mystery Series. "Least Trodden Ground" came out in October 2020.

To learn about new books and special offers, put your name on her newsletter list: eepurl.com/crf3F1.

Elaine also writes plays and novellas, including the one-act, "Common Ground," published in 2015. Her novella, "Biding Time," was one of five finalists in the National Press Club's first fiction contest, in 1993. "Falling into Place" is a novella about family strength as a World War II veteran rises to the toughest occasion. "In the Shadow of Light" is the fictional story of Corozón and her family, who are separated at the U.S./Mexico border.

Elaine conducts presentations on electronic publishing and other writing-related topics. Nonfiction includes "Words to Write By: Getting Your Thoughts on Paper" and "Writing in Retirement: Putting New Year's Resolutions to Work." She also presents online classes about writing and publishing. You can find her classes at TabletWise.

A member of Sisters in Crime and the Indiana Writer's Center, Elaine grew up in Maryland and moved to the Midwest in 1994. Elaine graduated from the University of Dayton with a BA in Political Science and from the American University with an MA in Government. She worked for GAO and the National Academy of Public Administration for many year, and for two Iowa members of the U.S. House of Representatives -- one Republican and one Democrat.

Elaine did some journalism course work at the University of Maryland and has taken fiction courses from The Writer's Center in Bethesda, MD, the University of Iowa Summer Writing Festival, and Georgetown University's Continuing Education Program.of the Book Bums Workshop in West Liberty, Iowa.

Diane Rapp
5.0 out of 5 stars Jolie and Scoobie have a family FAST
Reviewed in the United States on 21 August 2021
Verified Purchase
Loved this three-book set. We go to a crazy wedding, learn how the family grows FAST, watch the young couple grow together and solve more murders. What can be better? I really feel like I've made friends with these characters through the whole series and this set wraps it all up nicely.
Read more
Report abuse

Donna E
5.0 out of 5 stars I want more!
Reviewed in the United States on 26 March 2022
Verified Purchase
I love these characters so much, I need more! What happens to Scoobie, Jolie, their twins & Aunt Madge? You need to read this series, you’ll get hooked too!
Read more
Report abuse
See all reviews
Report an issue
Does this item contain inappropriate content?
Report
Do you believe that this item violates a copyright?
Report
Does this item contain quality or formatting issues?
Report