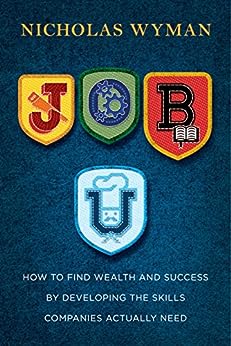 Job U: How to Find Wealth and Success by Developing the Skills Companies Actually Need Kindle Edition

by Nicholas Wyman (Author) Format: Kindle Edition
See all formats and editions
Sorry, there was a problem loading this page. Try again.
Get ready to relearn everything you thought you knew about what a successful career path can look like.

Today, unemployment hovers at a near-record high, yet 3.5 million American jobs remain unfilled. Why? Because companies simply cannot find people with the skills they actually need.

The good news is that this skills gap represents unprecedented opportunities for every person seeking a successful and exciting career. But these opportunities can’t be found inside the walls of the traditional classroom. Instead, they lie in the myriad of educational options that provide the technical, vocational, and soft skills on demand in today’s workplace, such as:

-Apprenticeships: Earn while you learn under the direct supervision of a skilled expert. Far beyond the artisan trades, today’s apprenticeships can be found at companies like Volkswagen and Siemens.

In Job U, you’ll learn about these paths to rewarding occupations; where to find them and how to parlay them into the best paying job in any field. And along the way, you’ll meet individuals of all ages who have attained their “dream jobs” through a non-traditional education: from an emergency air paramedic, to a lead mechanic of a racecar team, to an engineer of complex gas turbine generators, to a bestselling cookbook author.

Whether you are recent high school or college graduate, or well along in your career journey, Job U will help you find your way to a more secure and prosperous future.
Read more
Previous page
Next page

Winner of the "Business: Careers" Award of the 2015 USA Best Book Awards A provocative and well-researched look at education and skills development - or the lack thereof in the United States - one of the key issues facing companies, colleges and workers in the U.S. today. -Eric Spiegel, President and CEO, Siemens USA Job U should be required reading for those wanting to know where and how to acquire the in depth knowledge and real world skills needed not just to land a well paying job but to progress up the ladder toward a well paying career. Job U provides common sense, actionable solutions designed to close the skills gap and address the critical issue of economic growth and competitiveness -Stanley S. Litow, Vice President, Corporate Citizenship and Corporate Affairs & President, IBM International Foundation

"It's so refreshing to read a book as well written and accessible; that so eloquently nails the problem surrounding the "college for everyone" mindset. Above all, the marshalling of the growing empirical and case study evidence that marketable and practical skills pays will keep a few of those gilt edged educators awake at night." - Tom Bewick, CEO and Chief Economist at the International Skills Standards Organization Nicholas Wyman has done excellent research .... in Wyman's forthcoming book, Job U. Wyman argues that the United States should take a cue from the Germans' emphasis on the value of vocational education, particularly in the manufacturing sector, from an early age.- Carrie Sheffield - Forbes --This text refers to the paperback edition.

Nicholas Wyman is a speaker and expert on applying real-world solutions to the challenges companies face in ﬁnding skilled employees. He is CEO of the Institute for Workplace Skills and Innovation, which develops mentoring programs for corporations and places people in apprenticeship and training programs globally. He has an MBA and has studied at Harvard Business School and the Kennedy School of Government. --This text refers to the paperback edition.

Nicholas Wyman is an apprenticeship expert and CEO of the Institute for Workplace Skills and Innovation. He advises and develops programs for companies such as Nissan, Mercedes Benz, Citibank and Coke Cola on how to recruit, train, retain and "reskill" employees. A hands-on leader in the field, Wyman is dedicated to closing the gap between education and employment around the world.

In addition to his consulting work, Wyman speaks to HR departments, trade associations, think tanks, high schools and colleges throughout the EU, Singapore, China, Australia, and the U.S. An engaging and animated speaker, Wyman shares front line stories that audiences can relate to and apply directly to their lives. He has spoken at the International Foundation Conference on Youth Philanthropy in Athens, Greece; the Global Lessons in Apprenticeships launch in Washington, D.C.; the Recharging the Youth Conference in New York, N.Y.; and several private corporate events in the U.S. and Australia.

Wyman is a regular media commentator whose articles have appeared in various industry journals. He began his career as an apprentice chef and holds an MBA. He studied at the Harvard Business School and the Harvard Kennedy School. Job U, was published in January 2015 and is a practical roadmap exploring the myriad of unconventional and affordable pathways to fulfilling and rewarding careers. Debunking the notion that a traditional college degree is the best or only path to wealth and success, his book is for anyone who wants to learn how to add value and be valued in tomorrow's economy.

Job U has just been awarded a 2015 International Book Award in Business Careers.

Simon Mckeown
5.0 out of 5 stars Compulsory reading for every parant
Reviewed in Australia on 19 March 2016
In a climate where law graduates are suing their colleges this book is more relevant than ever. Educational institutions are not adapting to the new workplace paradigm but this book might still save you.

Compulsory reading for every parent, student, school-leaver and job-seeker.

Beth Phillips
5.0 out of 5 stars A MUST READ FOR EVERY NEW HIGH SCHOOL STUDENT, PARENT, TEACHER, GUIDANCE COUNSELOR and SCHOOL POLICY MAKER!
Reviewed in the United States on 26 February 2016
Verified Purchase
Nicholas Wyman thoroughly but clearly explains the problem of the middle skills gap in this generation, the evolution of the stigma related to vocational education in this country and describes successful models to combat the crisis in this book. He also cites data to refute the "college for all" mentality that has taken hold in spite of the outrageous cost of college. The book includes practical references to websites and sources to allow the reader to get up-to-date statistics on a variety of metrics.
Wyman traveled around the country to see first-hand how different skill-building and career creating models are working in high schools, community colleges and corporations. He's a good story teller which makes the more statistical information more relatable and the book, as a whole, readable in spite of a lot of data.
It truly is a must-read for anyone who has a vested interest in the life of a young person and the future of the country. We all agree that skilled trades are disappearing but many still consider trades lesser. It's a mistake which Wyman proves from many angles. I'll be gifting this book to many people because I don't want to part with my copy of it. It's that important.
Read more
One person found this helpful
Report abuse

Fairdealdave
5.0 out of 5 stars Must Read for educators, parents, students, guidance counselors and policy makers.
Reviewed in the United States on 25 January 2015
Verified Purchase
The book addresses the growing "Skills Gap" especially as it relates to today's advanced manufacturing. Wyman has a wonderful easy to read writing style and stays right on point. Wyman's comments on the "College for All" concept are fully supported by many leading studies including "Pathways to Prosperity" by the Harvard School of Education.

I believe the Skills Gap problem is a cultural norms issue that is the result of well intentioned progressive policies that have lost sight of common sense, human nature and the industrial realities on todays Advanced Manufacturing "shop floor". Both liberals and conservatives have all had something to do with creating, allowing or avoiding this problem. Wyman offers many examples of successful programs that are helping to disrupt this debilitating paradigm.

One of the best books I've read on this topic and I highly recommend it.
Read more
3 people found this helpful
Report abuse

Noah K.
5.0 out of 5 stars This is a must read for students, educators, parents, corporations, policy makers, and more. Keep up the great work, Mr. Wyman.
Reviewed in the United States on 24 January 2015
Verified Purchase
Job U captures the author's unique sense of passion and all of its readers will feel inspired by Wyman to join in his crusade to dispel the cruel myth that college is for everyone. I say cruel because, as Wyman so clearly shows in his book, for those who are not a good fit for college (a significant portion of society), all that it will do is leave them in extreme debt and waste valuable time they could have better spent on education or training that would make them ready for the job they desire. The statistics and real life examples that Wyman includes in his book are truly amazing. He puts together such a strong argument that I cannot believe that a single reader will not be persuaded. I am excited to see the effect that this book will have on students, educators, parents, corporations, policy makers, and all other relevant parties.
Read more
One person found this helpful
Report abuse

Victor E
5.0 out of 5 stars A wealth of information
Reviewed in the United States on 3 June 2015
Verified Purchase
An outstanding informational read, regarding employment/career options and inspiring career stories. I thoroughly enjoyed the side-notes with links, and tidbits on finding information to better your career. The pictures throughout with statistics helped make the stories more impact-ful. The skill-set necessary in the job market today are explained and resources were provided. I highly recommend! - Monique Estrella
Read more
One person found this helpful
Report abuse
See all reviews
Back to top
Get to Know Us
Make Money with Us
Let Us Help You
And don't forget:
© 1996-2022, Amazon.com, Inc. or its affiliates