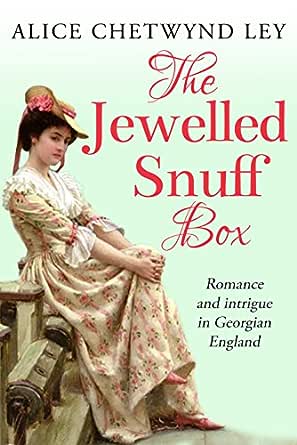 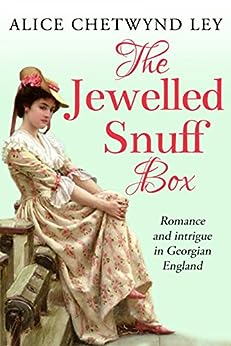 Young governess Jane Spencer is travelling to London when stormy weather forces her stagecoach to make a stop.

Battling through the snow to a nearby inn, she discovers a man, seemingly lifeless, by the side of the road. Though he appears to have been set upon by highwayman, they have left next to him in the ditch a clearly valuable jewelled snuff box.

When the man recovers his senses, he is dismayed to find he has completely lost his memory.

Sympathetic to his plight, Jane promises to help him discover his identity. But as soon as they reach London he disappears, leaving Jane with the snuff box…

Who was the enigmatic man? Why did he disappear?

And what secrets are hidden inside the mysterious jewelled snuff box…?

THE JEWELLED SNUFF BOX is the first novel by Alice Chetwynd Ley: a traditional British, pre Regency romance novel with a twist of suspense and mystery, set in Georgian England.

‘a cracking good tale, well paced, well told, with believable characters and plot twists that seem organic rather than arbitrary. I would recommend it for those looking for an old fashioned good read’ - Regency Retro Reads

‘These vintage Regency romances hover somewhere between Jane Austen and the genre as we know it today. I really enjoy them.’ - Sonya’s Stuff

Tessa
TOP 50 REVIEWER
5.0 out of 5 stars Superb
5 July 2016
Format: Kindle EditionVerified Purchase
What a wonderful story. This is the standard by which Regency Romance should be judged. It doesn't need erotic love scenes to keep you interested.
It is a typical fairy tale of a story, poor governess (Jane) of good family is on her way to a job as a companion. The stage she is on is stopped in it's journey by heavy snow. On the way to a nearby inn Jane stumbles upon a man lying unconscious by the side of the road. Next to him is a jewelled snuff box which she picks up. Other than that the man has nothing of value on him having been robbed. Unfortunately he has lost his memory due to a hit on the head but Jane helps him at the inn and also to reach London where she intends to ask her lawyer to help him.
Between the time she goes into the office and the time she comes out to get him, he disappears.
Jane takes up her new post which, unbeknownst to her, is as companion to an old adversary.
The twist and turns in this story keeps you glued to the page.
Who is the unconscious man?
Who is Jane really?
Will she be able to get a new position away from her old adversary, Celia?
I hope you can read this book with as much enjoyment as I did!

Janeen Henschke
5.0 out of 5 stars The Jewelled Snuff Box: Romance and intrigue in Georgian England
26 January 2019
Format: Kindle EditionVerified Purchase
Even though I gave this book a five star rating I was a little disappointed that the story finished as abruptly as it did. I would have liked to know what became of Celia. And how
Jane's uncle helped Jane, and if she had a happily-ever-after marriage! Thank you Alice Chetwyhd Ley for this book.

An Avid Reader
TOP 500 REVIEWER
5.0 out of 5 stars Loved it - highly recommended for lovers of Georgette Heyer
9 July 2016
Format: Kindle EditionVerified Purchase
This is a wonderful georgian/regency romance/mystery in the best style. Lovely characters in an intriguing story. Language and social mores hit the right note for the era. Good clean historical fun. Recommended without reserve for lovers of the Georgette Heyer style historical romance. The author has got closer than anyone I have yet read to the charm of Heyer.
Read more
One person found this helpful
Helpful
Comment Report abuse

Kindle Customer
TOP 1000 REVIEWER
5.0 out of 5 stars A great story
3 March 2017
Format: Kindle EditionVerified Purchase
I loved the mystery, the twists and turns, the drama. Finishes off really well, with all end neatly tied. Will definitely try more of her books if they are like this one.
Read more
Helpful
Comment Report abuse

sam
5.0 out of 5 stars Delightful read
24 December 2018
Format: Kindle Edition
Such a pleasure to find a book written in the style of my childhood faves such as "Little Women", tte Anne and Emily books. If only more modern romance writers could write with a deft pen rather than the heavy handedness prevalent in so many romance novels.
Thanks to the author's children for bringing their mother's stories to a new generation of book lovers.

Go to Amazon.com to see all 169 reviews 4.2 out of 5 stars
Get FREE delivery with Amazon Prime
Prime members enjoy FREE Delivery and exclusive access to movies, TV shows, music, Kindle e-books, Twitch Prime, and more.
> Get Started
Back to top
Get to Know Us
Make Money with Us
Let Us Help You
And don't forget:
© 1996-2020, Amazon.com, Inc. or its affiliates