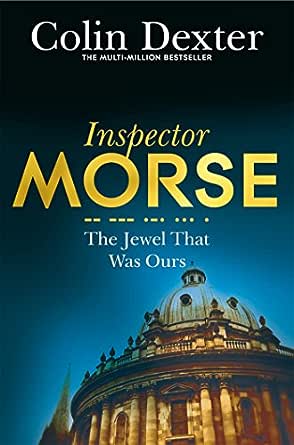 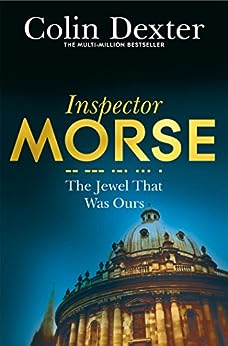 The Jewel that was Ours: An Inspector Morse Mystery 9 Kindle Edition

He looked overweight around the midriff, though nowhere else, and she wondered whether perhaps he drank too much. He looked weary, as if he had been up most of the night conducting his investigations ...

For Oxford, the arrival of twenty-seven American tourists is nothing out of the ordinary ... until one of their number is found dead in Room 310 at the Randolph Hotel. It looks like a sudden - and tragic - accident. Only Chief Inspector Morse appears not to overlook the simultaneous theft of a jewel-encrusted antique from the victim's handbag ...

Then, two days later, a naked and battered corpse is dragged from the River Cherwell. A coincidence? Maybe. But this time Morse is determined to prove the link ...

PRAISE FOR THE INSPECTOR MORSE SERIES

"The Inspector Morse series, both the novels and the television dramas, are among the finest creations of British culture and are known and loved all over the world." Sydney Morning Herald

Nick Drew
5.0 out of 5 stars Fun with language and a great detective story too.
29 April 2015
Format: Kindle EditionVerified Purchase
If you like Inspector Morse, no need for further comment.
Read more
Helpful
Comment Report abuse
See all 1 customer reviews
Write a customer review

The Fred
1.0 out of 5 stars Kindle edition poorly formatted -- stick with paperback
11 July 2016 - Published on Amazon.com
Verified Purchase
No problems with the story; this comment applies only to the Kindle version.

In this book (I have read no others of his), Dexter relies on hand-written notes and letters quite often. These are nearly impossible to read on the hardware Kindle. I do not understand why they could not have been transcribed. I believe this is fully Amazon's fault, as the Kindle is their baby, but they seem to have little regard for the quality of the electronic books they "publish."

I'm giving this one star because a book this old is readily (and more cheaply) available in paperback. I purchased a "new" Kindle edition for convenience, but when much of the story (ten to fifteen pages of important plot detail) is unreadable, I can hardly call that convenient.

Mindo'ermatter
3.0 out of 5 stars My Least Favorite of the Series
5 August 2019 - Published on Amazon.com
Verified Purchase
As I have previously stated, every author is entitled to a quality slump as they use up their low-hanging fruit and unique perspectives and must regenerate new and more productive growth because the easy work is done. This installment has a good storyline and plot but lacks the sparkle and innovative perspective of earlier works.

Overall, I'd say the book was OK, but not one that I would want to read against because it seemed forced in places and less enjoyable to read. As part of the series, it is still essential for details needed for future books; however, I wondered if the author's health or a change in editors influenced the outcome.

Left me empty at times, while I searched to find my expected friend again in better form.

John Jenkins
4.0 out of 5 stars A literary character who gets a bar named for him!
17 January 2017 - Published on Amazon.com
Verified Purchase
“The Jewel That Was Ours” is an enjoyable Colin Dexter murder mystery featuring Inspector Morse. Much of the plot takes place at the Randolph Hotel; an actual five-star hotel located in Oxford, England, and in its Chapters Bar, which has recently been renamed the Morse Bar in honor of this book’s protagonist.

The clues that enable Inspector Morse – and the reader – to determine how and by whom the crimes are committed are cleverly sprinkled throughout the novel. Of course, there are many other possible clues that temporarily distract the Inspector, and probably the reader as well; so the conclusion will be a satisfying surprise to most readers.

The book is very readable, but Mr. Dexter’s use of parentheses is excessive. It seems to interrupt the narrative because the information seems to be inserted as afterthoughts. Most of this parenthetical information should be omitted or conveyed in a more intentional manner. On the other hand, this California reader is amused by the author’s “California drawl” reference and also appreciates his mythological similes – “as many illegitimate offspring as almighty Zeus” and “as still as a man who has gazed into the eyes of the Medusa.”

Interestingly, the first name of Inspector Morse, which a television series identifies as Endeavor, is not used in this novel. In any case, most readers are likely to enjoy the way that Mr. Dexter appropriately concludes the romantic endeavor of Inspector Morse.

I agree with other reviewers that it is unfortunate that the three or four handwritten notes are virtually impossible to read in the Kindle version. That might be a reason to try the hardcover, paperback or audible version.
Read more

Kingdog
4.0 out of 5 stars Another convoluted victory for Morse and Lewis.
27 June 2013 - Published on Amazon.com
Verified Purchase
A compelling plot and a great read. Inspector Morse is a vivid protagonist, and no ordinary action-hero cop. He operates outside the box, in the tradition of the great intellects of English crime fiction. Never daunted by the apparently unsolvable crime, he applies the crossword puzzle approach to real life mysteries. He is assisted by Lewis, who seems to not only anticipate Morse's needs, but acts as an uncanny catalyst in the crime solving process. Factor in a very sympathetic criminal element and a spoonful of sharp, ironic humor, and you have one of the great teams of modern detective literature. My one criticism would be an occasional over-reliance on a large, changeable cast of characters, to connect the dots of the plot elements. But... I nitpick. Jewel That Was Ours is a riveting read, another modern classic by Colin Dexter.
Read more
2 people found this helpful

Amazon Customer
4.0 out of 5 stars A competent Morse mystery - not the best, but definitely not the worst.
25 October 2015 - Published on Amazon.com
Format: Kindle EditionVerified Purchase
This may not be everyone's favourite Morse, and there are some who would object to its genesis as a screenplay for the much loved series starring John Thaw, but I still think it delivers. There's all the classic motifs, from crosswords to classical music, and the episode reliable hits the high notes of the Morse formula. It must be admitted, however, that this particular instalment seems to lack some of the sparkle and joyful inventiveness of earlier mysteries, but there is still a great deal here for fans of the curmudgeonly detective to enjoy.
Read more
One person found this helpful
Go to Amazon.com to see all 126 reviews 4.1 out of 5 stars
Get FREE delivery with Amazon Prime
Prime members enjoy FREE Delivery and exclusive access to movies, TV shows, music, Kindle e-books, Twitch Prime, and more.
> Get Started
Back to top
Get to Know Us
Make Money with Us
Let Us Help You
And don't forget:
© 1996-2020, Amazon.com, Inc. or its affiliates