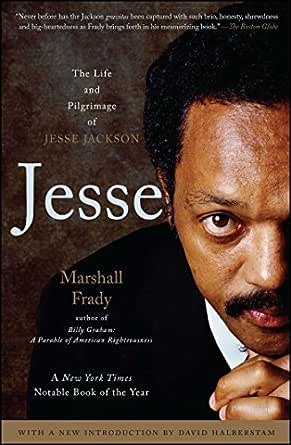 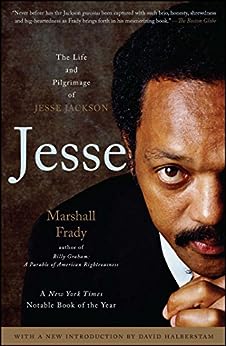 Jesse: The Life and Pilgrimage of Jesse Jackson Kindle Edition

A native South Carolinian, Marshal Frady has been a journalist for over twenty-five years, writing principally on political figures and racial and social tensions in the American culture, first as a correspondent for Newsweek, then for Life, Harper's, Esquire, The New York Review of Books, The Sunday Times (London), The Atlantic Monthly, and most recently The New Yorker.  In the 1980's, he was chief writer and correspondent for ABC News Closeup and a correspondent for Nightline.  He is the author of the acclaimed biographies Wallace and Billy Graham: A Parable of American Righteousness.  He is currently at work on a novel. --This text refers to an out of print or unavailable edition of this title.

e segregated South, out of abject beginnings in South Carolina poverty and illegitimacy, heir apparent to Martin Luther King, Jr., twice a presidential candidate, recognized on the streets of South Central L.A., Ghana, Armenia, and Damascus, Jesse Jackson is a figure unique not only in American politics, but in American history.  As James Baldwin noted during Jackson's 1984 presidential campaign, "His presence presents the American Republic with questions and choices it has spent all its history until this hour trying to avoid...And nothing will ever again be what it was before."

Marshall Frady has been given closer access to Jackson and his family for a more sustained period of time than any previous writer.  He has traveled with Jackson in the U.S., Africa, Russia, and the Middle East, and has conducted countless interviews with his colleagues and rivals of the last thirty years.  The result is the most astute and compelling portrait of the man we --This text refers to an out of print or unavailable edition of this title.

"Never before has the Jackson gravitas been captured with such brio, honesty, shrewdness and big-heartedness as Frady brings forth in his mesmerizing book." -- The Boston Globe

"Astonishing . . . as subtle and perceptive a portrait as any black writer could have produced of one of the most complex public figures of our times . . . Frady provides such a full-bodied portrait of this awesomely gifted but equally flawed man that it should provoke a repositioning of Jackson's place in history." -- Time

"Frady has delivered a thoroughly researched, at times poetically written profile of a towering public man." -- The Washington Times

"Frady's . . . biography of Jesse Jackson, perhaps our era's most spellbinding political preacher, [is] hugely useful in the way [it lays] out for our inspection the split personality of this nation. Frady is one of the best political biographers of our time." -- Robert Sherrill, Los Angeles Times

"What makes this galvanic, richly variegated, novelistic biography ring so true is that Frady . . . manages to balance society's shortcomings with Jackson's own. . . . Frady's biography comes off as voluble and dynamic as Jackson himself." -- Entertainment Weekly --This text refers to an out of print or unavailable edition of this title.

Judy
5.0 out of 5 stars Well written, super-detailed account of Jackson's life
Reviewed in the United States on 13 July 2017
Verified Purchase
Well written and specific account of Jesse's life, maybe a little too much detail, if that's possible.
Read more
Report abuse
See all reviews
Get FREE delivery with Amazon Prime
Prime members enjoy FREE Delivery and exclusive access to movies, TV shows, music, Kindle e-books, Twitch Prime, and more.
> Get Started
Back to top
Get to Know Us
Make Money with Us
Let Us Help You
And don't forget:
© 1996-2020, Amazon.com, Inc. or its affiliates