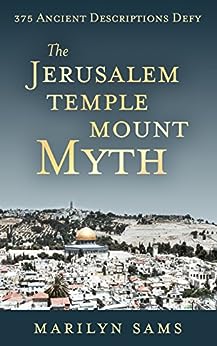 by Marilyn Sams (Author) Format: Kindle Edition
See all formats and editions
Sorry, there was a problem loading this page. Try again.
This volume adds new sources and insights to the work of Ernest L. Martin and contains over 375 descriptions of Jerusalem’s southeastern hill (Mount Zion), the temple mount in the City of David, and the tower of Antonia (today called the “temple mount”). Melchizedek built his temple in Salem, Jacob erected his pillar at the same location, and the borders of Benjamin and Judah, home to the temple, divided the southeastern hill. Solomon erected the temple in the City of David before breaking down its northern wall to install Pharoah’s daughter in her palace (3 Kings 2: 35, Septuagint version). Josephus described the hill of the temple as descending by degrees toward the east parts of the city, but there has never been a city on the east side of the alleged temple mount. A host of other descriptions (with references) place the temple’s east wall in the Kidron valley, in the middle of the city, and over the Gihon Spring, whereas the alleged temple mount is north of the city, its east wall is at the top of the hill, and there is no accessible spring within its precincts. It does not match Josephus’s descriptions of the temple’s dimensions, walls, gates, height, position, or finished state. Its remarkable square rock (under the Dome), is never mentioned with reference to the temple, but is for the Roman Camp, which the Byzantine Christians identified as the “Praetorium” and the site of the Church of St. Sophia (which Caliph al-Malik destroyed to build the Dome of the Rock). Indeed, Eutychius stated the Christians had never built on the temple ruins site and Rabbi David Kimchi said the same for the “nations.” At Masada, eye-witness Eleazar described the Roman camp as the only monument remaining after the 70 A.D. destruction. Today, the alleged temple mount is the only surviving monument from the destruction and is the Roman camp. Archaeological findings relating to the issues are dispersed throughout, but two specific chapters on the alleged temple mount’s archaeology and the archaeology of the City of David are included. A list of the most relevant descriptions is given at the end. A review of the book by Margaret Barker, UK scholar and author of 29 books states: “Marilyn Sams brings together a vast array of ancient evidence to argue that the Jerusalem Temple was not on the Temple Mount.”
Read more
Previous page
Next page
Due to its large file size, this book may take longer to download

Marilyn Sams is a former educator turned independent researcher, educated in English and American Literature at the University of Utah and Brigham Young University. --This text refers to an alternate kindle_edition edition.

Jezza
3.0 out of 5 stars Just add editor..
Reviewed in Australia on 2 July 2017
Verified Purchase
For those who are interested in the history of the Second Temple at Jerusalem and the writings of Josephus, a little research reveals that the long-accepted, standard placement of that building is hotly disputed. For a person who does not have religious, nationalistic or emotional attachment to this traditional positioning of Herod's temple above the Dome of the Rock, it soon becomes obvious that the tradition may well be wrong. For fundamentalist Christians and Jews such a concept is, sadly, blasphemous and yes, wars have been fought over less.

For the serious researcher, it is hard to find solid, well-documented material about the "temple mount myth" as Marilyn Sams names it. The few web sites, articles and books written on the subject, at least the ones that I have come across, all seem a bit flaky and to be the work of authors with obscure religious agendas who lack the academic or journalistic rigour that one hopes for with historical research. So when I stumbled across "The Jerusalem Temple Mount Myth" by Marilyn Sams, I had high hopes.

Ms. Sams has clearly done her homework and has assembled an impressive body of evidence for her case. Sadly however, she has committed that cardinal sin of many indie authors and seemingly has published her thesis without the services of a professional editor. I am three-quarters of the way through the book and I am finding it to be a very frustrating read indeed. Here are some of the reasons why:

* With each new chapter, the author continually recycles her assertions and constantly repeats the same citations. A reader needs to be given a clear theory that builds throughout the narrative in a logical and interesting way, but it is hard to feel you are getting anywhere as you read this book.

* For a thesis about the disputed locations of many buildings and geographical features (and there are masses of them here), we need good plans and diagrams, and plenty of them. But mostly all we get here are several simplistic oblongs with square block overlaying - little or no annotation or reference to the surrounding landscape. And then there are pages and pages of complicated descriptions which left my brain in a tangle and with no diagrams at all to assist the poor confused reader.

* Units of measurement. The author continually jumps between "feet", "cubits" and "furlongs", sometimes within a sentence, without the simple device, for instance, of putting a constant reference in bracket - "40 cubits (60 ft)" would have been nice.

Despite these difficulties with her book, I am learning a lot about the temple mount myth and I felt that Marilyn Sams has something very worthwhile to report. Can I make a suggestion: to take the manuscript to a good editor, cut it down to about a third of its length and re-publish as a new edition (paper?) or a fresh title perhaps.
Read more
Helpful
Report abuse
See all reviews

Lookman
5.0 out of 5 stars Great book!
Reviewed in the United Kingdom on 22 April 2020
Verified Purchase
This is an amazing book that outlines all the lies and fabrications have and do make up. A truly usefully book. Christians are so signora about there own religion they are really really dumb. If any one wants to still be a Christian after this for some obscure reasoning then the should be Orthodox and never Catholic or Protestant.
Many thanks to Rabbi Tovia Singer
Read more
Report abuse

Robert Boraker
5.0 out of 5 stars Five Stars
Reviewed in the United Kingdom on 18 May 2018
Verified Purchase
Scholarly written and well documented with sources checked for accuracy.
Read more
Report abuse

Li'l ole me :-)
5.0 out of 5 stars couple of idf boys guarding the gear- City of David entrance 2006 - thought I'd share (no apparent reason, except: interesting)
Reviewed in the United Kingdom on 13 July 2017
Verified Purchase
Great research - many sources quoted and analysed, many of them verifiable. A visit to the actual location, after reading the book, would be very good to do (time and resources permitting), to check out the lay of the land, and visit the City of David archaeological site etc. Then perhaps drop in to the Temple Institute in town and tell them your thoughts :-)
Read more

5.0 out of 5 stars couple of idf boys guarding the gear- City of David entrance 2006 - thought I'd share (no apparent reason, except: interesting)
Reviewed in the United Kingdom on 12 July 2017
Great research - many sources quoted and analysed, many of them verifiable. A visit to the actual location, after reading the book, would be very good to do (time and resources permitting), to check out the lay of the land, and visit the City of David archaeological site etc. Then perhaps drop in to the Temple Institute in town and tell them your thoughts :-)
Images in this review

Robert Paul Eaby
5.0 out of 5 stars Five Stars
Reviewed in the United States on 15 August 2017
Verified Purchase
I enjoyed the book very much, I believe it has many good points about where the Temple was.
Read more
One person found this helpful
Report abuse

robert d ellsworth
5.0 out of 5 stars Her grasp and understanding of the complex topography of Jerusalem is also amazing. In addition
Reviewed in the United States on 7 August 2015
Verified Purchase
I was a decades-long associate of Dr Ernest Martin, whose book The Temples that Jerusalem Forgot, is credited by author Marilyn Sams as
her starting point in investigating the question of the actual location of the Solomonic and Herodian Temples. Having been familiar with the
basic tenets of this debate since Dr; Martin first published on this question in 1998, I can honestly say that Ms Sams grasp of the question, and attention to the archaeological and historical detail involved, is simply unsurpassed. Her knowledge and understanding of the complex topography of Jerusalem is also amazing. In addition, she has researched this subject to such an extent that she provides a great number of new sources, and indeed, new arguments, that favor Dr. Martin's conclusions. The fact that the book is thus far only available on Kindle is unfortunate, and I hope the author has plans to publish a hard copy version as well. Bob Ellsworth, Pasadena, California netlang101@aol.com

Read more
12 people found this helpful
Report abuse
See all reviews
Back to top
Get to Know Us
Make Money with Us
Let Us Help You
And don't forget:
© 1996-2022, Amazon.com, Inc. or its affiliates