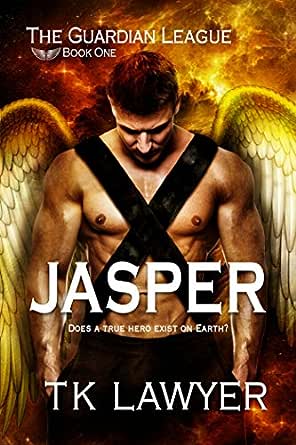 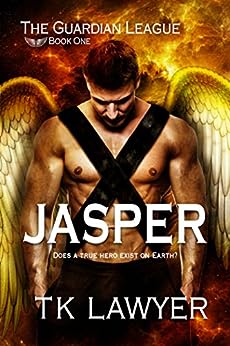 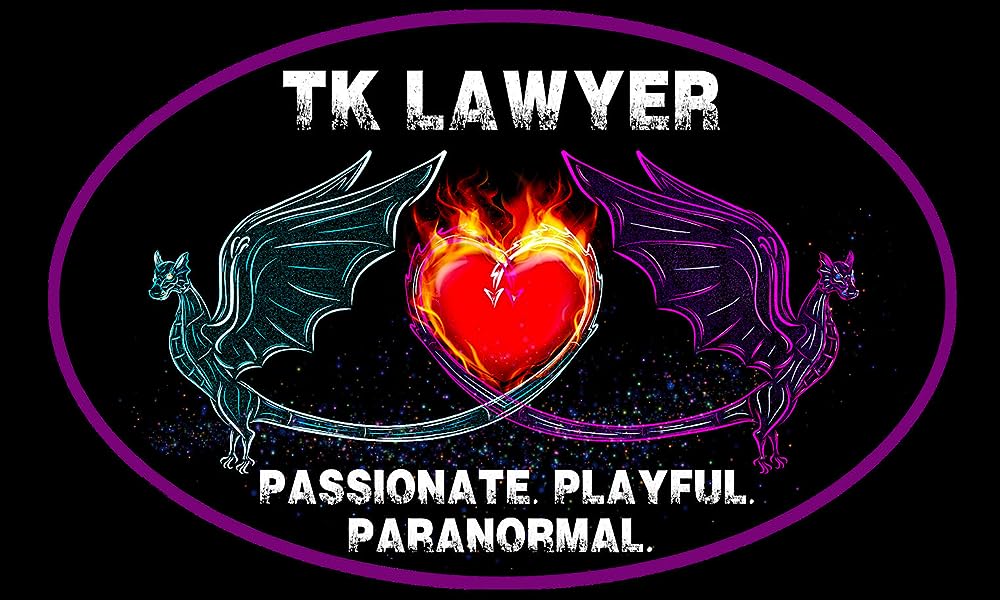 T.K. Lawyer creates romantic, emotion-filled worlds filled with passion, seduction and tons of affection. Strong, alpha males willing to do anything to please their feisty mates regardless how their mates test their limits are the premise of each of her books. She likes to say how each of her unique characters tells his/her own enchanting story and she is just the vessel that writes it all down. When not writing, she is likely spending time with her husband and best friend, watching paranormal themed T.V. shows, thinking up new scenes for future books. She has several books in mind for the future including four more half-wolf stories and two Angel series. Stay tuned for more to come. --This text refers to an out of print or unavailable edition of this title.

Angela Hayes
TOP 500 REVIEWER
4.0 out of 5 stars Tatiana Baker has had some bad experiences when it comes to relationships
Reviewed in Australia on 13 February 2017
Verified Purchase
4 Stars

Jasper is the first book in The Guardian League by T.K Lawyer.
Tatiana Baker has had some bad experiences when it comes to relationships. She has a little trouble trusting and for someone so smart, she sure has a lot of self-worth and insecurity issues. Tatiana is gorgeous and curvy, or fluffy as she likes to put it, and seems to think this is a barrier to finding ‘the one’. She can’t see how beautiful she really is, inside and out.
Her ideal dream man has yet to cross her path and at this point she is beginning to wonder if he truly exists. She isn’t asking for much- just someone sexy and gorgeous, a soulmate, a best friend and life-long companion, someone she could share life and everything with, someone who loves being in her company and who wants to spend a lot of time with her….. Oh, and they must be good in bed. That’s not too much to ask for, right? But most men she’s encountered seemed to only be looking for a one-night-stand, and Tatiana wasn’t interested in just ‘hooking up’- she wanted more, anything less just seemed pointless.
On her drive to work one morning, Tatiana is involved in a car crash, that just from the severity of the damage done to her vehicle- she really shouldn’t have survived, but miraculously she found herself standing outside the wreak, with very minor injuries. She was saved by a stunningly handsome man and Tatiana is transfixed by him, his smile and dreamy eyes mesmerise her. But before she can find out more about him, he disappears. She only took her eyes off him for a moment and he was gone. Tatiana can’t stop thinking about him; he is on her mind constantly.
Jasper was only doing his duty; he wasn’t looking for a mate. So when he turns up at the scene of her accident, the last thing he expects is to be drawn to the beautiful woman he rescued. He has never felt such a powerful attraction or the overwhelming need to protect and defend someone, ever before. She is just so enticing, alluring and incredibly sexy. He leaves the scene and thinks that this will be the end of his infatuation- but his mind is drawn to thoughts of her and he knows he simply must get to know her better, to make her his, forever. Now all he has to do is find a way to ‘meet’ her again and convince her that they would be perfect together.
While attending a function one evening, she is surprised to find that her ‘hero’ is also there. She goes over to thank him for saving her. They start talking and really hit it off, both end up having a really wonderful time, ending the night with making plans to go out again soon.
But with him holding a huge secret and disappearing for periods of time- and her overwhelming insecurities, it is all but over before anything can begin. Can Tatiana let go of all her self-doubt and trust issues and give him a chance? What happens when she discovers who he really is and what he’s been hiding from her? Will she be able to accept him, or will the news just add to her anxieties? Will they find their soulmate and life-long companion in each other? One thing is for certain; that she will test his limits like no one else has ever done before…….
I was intrigued by the premise of this story- the blurb and the cover really had me itching to read the book. I thought that this would be a unique and original take on a romance between an Angel and a human.
While the story itself was great- the dialog between the main characters seemed overly formal and at times awkward or a little contrived. I had trouble really connecting to the characters or the story because of this. Also, the story had a great pace until the last quarter, where its progress slowed considerably- as Tatiana’s angst and commitment issues bogged down the flow of the story. Because of this, it took till the last chapter before the story started wrapping up- I was beginning to think that it would end up being continued in the next book- so that last chapter of the story seemed really rushed to me.
Overall the story is very sweet, but with a whole lot of angst. It is a slightly different take on an ‘Angel’ romance. I would read the next book, to see if some of the issues I had with this book are resolved in that one- and to discover what the author does with the storylines for the rest of this series.

Tracy
4.0 out of 5 stars Hot Sexy Angels need I say more..
Reviewed in Australia on 14 October 2015
Hot Sexy Angels need I say more...
I loved the characters in Jasper. Yes we have the sexy hot protective angel, Jasper, ohh but he is so much more, he hasn't set out to meet his mate but while doing his duty as a guardian Angel he saves Tatiana.......
Tatiana is a wonderful realistic character one in which the author has written about to include those pesky emotions and inadequacies that we all think about at times...Weight, am I good enough, does he truly love me.
Do Jasper and Tatiana get the HEA?
No spoilers but if you love a good Paranormal (Angel) Story then add Japer to your TBR.
This book was a quick read and has left me wanting more, looking forward to more in The Guardian League series..
Read more
2 people found this helpful
Helpful
Report abuse

Jennadb
TOP 500 REVIEWER
4.0 out of 5 stars Tatiana has a good life, a good job
Reviewed in Australia on 11 February 2017
Tatiana has a good life, a good job, good friends and her dog but Tatiana is looking for a man to love, a man that won’t up and leave her, the man of her dreams. Tatiana has been hurt in the past by men and finds it hard to trust and self esteem issues. On her way to work on day Tatiana is involved in an accident but instead of being hurt she somehow finds herself outside the car with a mystery man who has saved her. When she turns around to inspect the car and turns back he has gone but she cannot stop thinking about this mystery man.

Tatiana crosses paths again with this gorgeous mysterious man, Jasper. Jasper is more than he seems, he is a Guardian angel for the Guardian League. Jasper sees Tatiana as more than his charge, she is his mate. Tatiana is trying to let go of her past relationship fears as she builds a relationship with Jasper. Jasper will do anything for Tatiana and shows her his true self and does things that he is not supposed to do with a human and because of this gets called to front up at the Council. The council gives Jasper an ultimatum give up being an angel or give up Tatiana.

Will Japser give up the woman he loves or give up the job he loves? Can Tatiana get over her fears and have a life with the man she loves?

I am looking forward to reading more of this series. Who wouldn’t want to have their very own guardian angel?
Read more
Helpful
Report abuse

Patty P.
4.0 out of 5 stars Romance with an Angelic Twist
Reviewed in the United States on 12 July 2018
Verified Purchase
Tatiana is a lovely woman who is very critical of herself, a feeling exacerbated by some failed relationships that made her doubt her own worthiness. She questions any man’s interest in her, including a co-worker who wants to be more than friends. When Jasper saves her life in a serious car accident, she can’t stop thinking about him, even as she tells herself he’s out of her league. Jasper can’t get her out of his mind and sets out to win her over, even as she questions his every attempt to let her know he’s interested in her alone. Will her discovery that he’s her guardian angel, one who is a member of the Guardian League, ease her fears, or make things worse?

T.K. Lawyer takes the reader on a journey of paranormal romance involving a human woman with trust issues and an angel who cannot lie to benefit himself. Add to the mix a conniving friend, a human man who loves her, too, a Council that separates her and her angel, and her constant insecurities, and it’s a journey fraught with twists and turns. I enjoyed the ride, and look forward to reading more by this author.
Read more
Report abuse

Shawn Wood
5.0 out of 5 stars Love Jasper
Reviewed in the United States on 21 April 2016
Verified Purchase
Great a t book, Tatiana has been hurt in the past by men, then She meets Jasper a gorgeous super sexy angel. Tatiana must learn to let go of her past and her fear of relationships or her relationship with Jasper will fall apart before it truly gets started. This was a good fun read. Loved the characters in the book. No relationship is easy, but can a human and angel relationship really work, and if so how? T.K. Lawyer answers these questions and more in this book.
Read more
One person found this helpful
Report abuse

Suzanne Cobb
5.0 out of 5 stars Love this Angel!!
Reviewed in the United States on 18 May 2017
Verified Purchase
Angela and humans what a story!
Jasper's mate is a human and he has to decide to stay an angel or become human for her! What a love story, a must read!
Read more
Report abuse
See all reviews
Back to top
Get to Know Us
Make Money with Us
Let Us Help You
And don't forget:
© 1996-2021, Amazon.com, Inc. or its affiliates