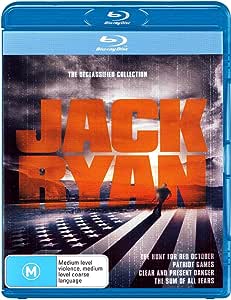 A quadruple bill of films featuring Tom Clancy's CIA agent Jack Ryan. 'The Hunt for Red October' (1990) is set in 1984 when Soviet submarine captain Marko Ramius (Sean Connery) decides to break away from the military exercises in which he has been ordered to take part and sets a course straight for the American coastline. The Americans believe he is mounting a renegade attack, the Russians believe he is trying to defect, and both nations send their Navies out in pursuit. The one man who seems to have a clear grasp on the situation is C.I.A. analyst Jack Ryan (Alec Baldwin), but can he make the super-powers see sense before they risk everything in a potentially catastrophic naval encounter? In 'Patriot Games' (1992), Ryan (Harrison Ford) prevents the assassination of a British Earl, killing one of the terrorist assassins in the process. The terrorist's brother Sean Miller (Sean Bean) vows revenge on Ryan and his family. This results in a great deal of shooting and chasing. In 'Clear and Present Danger' (1994), Ford reprises his role. When his mentor Admiral James Greer (James Earl Jones) becomes gravely ill, Ryan is appointed acting CIA Deputy Director of Intelligence. His first assignment: to investigate the murder of one of the President's friends, a prominent US businessman with secret ties to Colombian drug cartels. Finally in 'The Sum of All Fears' (2002), America's security community is seized by panic. The Russian premier has just died and been replaced by President Zorkin (Richard Marner) a man whose international ambitions are something of an unknown quantity. Fortunately, seasoned CIA/NSA analyst Jack Ryan (Ben Affleck) is on hand to profile the man in the hot seat. But then the USA's worst fear comes true when Baltimore is struck by a nuclear device during a football game. Cabot (Morgan Freeman), Ryan's boss, is convinced this isn't really a Russian strike and dispatches Ryan to uncover the truth before the USA and Russian federation slide into WWIII. A shadowy terrorist group might just hold the key...

Old Grim's Reviews
TOP 100 REVIEWER
5.0 out of 5 stars 4 great Jack Ryan movies
Reviewed in Australia on 20 March 2019
Verified Purchase
While as a collection of movies based on the one iconic character by the late great Tom Clancy, there is a lack of consistency among the movies and all are better thought of as stand alone. As Baldwin, Ford and Affleck all play a drastically different version of Ryan. Baldwin and Ford are in the one series whereas Affleck's Ryan is a reboot.
Still there is plenty to be had in these great films. While they do depart from the books they still are highly entertaining.