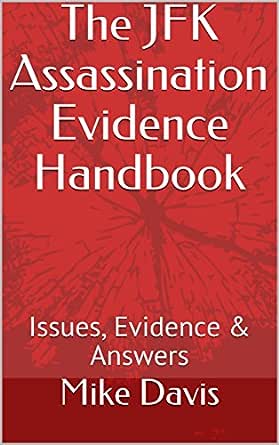 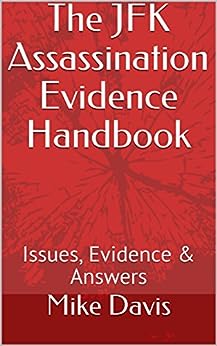 The JFK Assassination Evidence Handbook brings to light a wealth of evidence that the Warren Commission swept under the rug when it produced the Warren Report in 1964. Drawn from the Commission's own collection of hearings and exhibits, plus thousands of pages of unindexed documents, this evidence decisively refutes the Warren Commission's theory of Oswald as lone assassin. By applying the Commission's own evidence to the key issues of the case, supplemented by the evidence collected by subsequent government panels, The JFK Assassination Evidence Handbook shows beyond a reasonable doubt that at least three assassins targeted President Kennedy in Dallas, that Lee Oswald was not one of the shooters, that Oswald had associations not only with U. S. intelligence, but also with organized crime, that the Dallas police department provided false police radio transcripts to the Commission, that Officer J. D. Tippit's movements following the assassination raise the suspicion he was hunting for Oswald in order to silence him, and that the police department's handling of the forensic evidence was so sloppy that massive falsification and substitution of evidence against Oswald cannot be ruled out. These and many other new revelations are concisely presented and meticulously documented with numerous references to the source documents. This major addition to the assassination literature is an essential reference work and an indispensable guide for defenders of the conspiracist position. No serious student of the Kennedy assassination can afford to be without The JFK Assassination Evidence Handbook.
click to open popover

David L Bowman Sr
4.0 out of 5 stars Overlooking evidence
28 May 2019 - Published on Amazon.com
Verified Purchase
I was disappointed that there was no mention of the bullet hole in the presidents vehicle windshield and another bullet strike in the windshield frame. Photos of these strikes exist. I was puzzled that more information regarding the first reports of the rifle found in the Texas School Book Depository dealt with a Mauser and not the Italian rifle. I recall seeing actual photographs of a clearly identified Mauser rifle soon after it was found. Otherwise, with some additional minor points, the book is extremely well written and easy to follow.
Read more
11 people found this helpful

Ms. Canard
5.0 out of 5 stars issues, evidence, and answers for a conspiracy and against Oswald as the lone nut assassin.
11 November 2018 - Published on Amazon.com
Verified Purchase
While there may not be enough evidence to fill up a great mountain range, the evidence for a conspiracy in the murder of JFK is plentiful. Davis analyzes much of the evidence for and against a conspiracy to conclude Oswald wasn't a lone nut assassin and that there was a conspiracy. This book is well written and edited. I enjoyed reading all of it.
Read more
15 people found this helpful

JuniorMI2011
5.0 out of 5 stars Worth the Read?
13 April 2019 - Published on Amazon.com
Verified Purchase
This book looks at all the evidence of the assassination as if you were going to try Lee Harvey Oswald for the case. And does a really decent job debunking various conspiracies. This is the first book that gathers the evidence together and refers to other publications to make the point. Is it worth going through it all to come to the end of the book and be right back where you started from? You will have to decide for yourself. For me I enjoyed the ride.
Read more
4 people found this helpful

thomas g.
4.0 out of 5 stars Kennedy Assassination Revelations
27 February 2019 - Published on Amazon.com
Verified Purchase
I Have Enjoyed Reading This; It DOES Answer Many Questions, & Also, Shows Just How Deceptive the Warren Commission Really Was!
Read more
7 people found this helpful
Go to Amazon.com to see all 17 reviews 4.0 out of 5 stars
Get FREE delivery with Amazon Prime
Prime members enjoy FREE Delivery and exclusive access to movies, TV shows, music, Kindle e-books, Twitch Prime, and more.
> Get Started
Back to top
Get to Know Us
Make Money with Us
Let Us Help You
And don't forget:
© 1996-2020, Amazon.com, Inc. or its affiliates