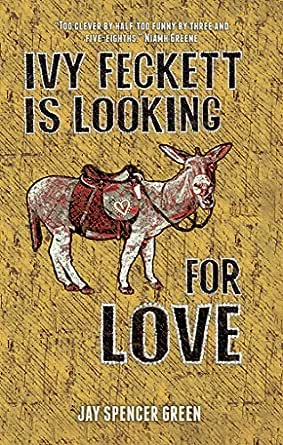 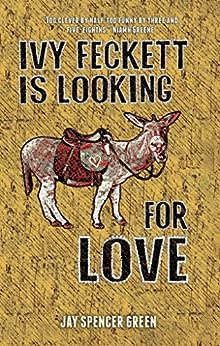 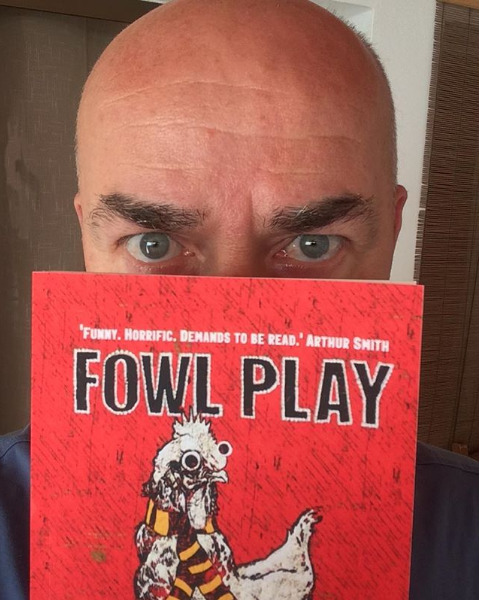 The "nerds-against-the-patriarchy" romcom guaranteed to tickle your inner geek!

When brainiac dweebs and smooth-talking power players meet up, there's no telling what can happen. In the case of Ivy Feckett, what happens is a nonstop romp of wry, quirky fun.

Bookish Ivy's cluelessness is as endearing as it is comical, from the first peek into her random sexual fantasies to the moment she realizes that her boss, the rich, handsome Ned Hartfield, is a serial manipulator with "wealth-induced Asperger's." Her search for love may not go as smoothly as her search for geocaches, but its route through awkward hookups, clumsy intrigue, and fake evangelicals is both hilarious and touching.

The second novel from award-winning author Jay Spencer Green, Ivy Feckett is Looking for Love is an outrageous, hilarious, and uplifting tale that will have you amused while you muse, cackling while you contemplate, and chortling while you cogitate. Sometimes all at once!

Born in Solihull, England, Jay Spencer Green has lived in Dublin, Ireland, for over twenty years. He has worked as a factory laborer, college lecturer, database editor, van driver, theater stagehand, court coverer at Wimbledon, hotel dishwasher, and conveyor belt supervisor. Green's debut novel, Breakfast at Cannibal Joe's, has been described as "savagely funny and deftly anarchic." He keeps his wit properly sharpened on his blog at jayspencergreen.com.

Mudcat
5.0 out of 5 stars Jay Spencer Green is a Fecken Good Writer
13 December 2016 - Published on Amazon.com
Verified Purchase
A "responsible" adult would probably take measures to put an end to this madness, but Jay Spencer Green's scribblings are just too much fun to read and Ivy Feckett faceplants itself into that "storied" albeit short tradition. I hope the author isn't sitting on his arse sipping wine while this reader pines in the cold by the fjords for numero three-oh. Bottom line: Jay Spencer Green is a fecken good writer.
Read more

Betsy Robinson
4.0 out of 5 stars Charming
4 November 2016 - Published on Amazon.com
Verified Purchase
Clever and charming with some delicious storytelling surprises toward the end, this novel is a genre-defying romantic fairy tale that also manages to be a philosophical treatise on cooperative ecology and religion. I read this delightful book in one day.
Read more
One person found this helpful

Amazon customer
5.0 out of 5 stars Brummie Brilliance
19 October 2016 - Published on Amazon.com
‘Ivy Feckett is Looking For Love’ is a romance book for people who don’t like reading romances, but it’s a helluva lot more as well.

This second novel from Jay Spencer Green confirms how much of a superbly talented author he is. In fact, he’s fast becoming one of my favourite fiction writers. His work is so engrossing that one doesn’t even stop to ponder at how expertly executed it is. It’s a world of completeness with relatable characters, a strong story and a lot of fun and funniness.

This book is more mellow and sentimental than his debut, and there’s a constant running humour throughout but it’s not as in-your-face and laugh-out-loudish as ‘Breakfast at Cannibal Joe’s’, and that’s not a bad thing, as it shows how adept the author is at maintaining the right feel for a particular story.

There were maybe a couple of bits that I didn’t feel worked, or were needed (the dog’s point of view, for instance) but I know I’m only nitpicking because the rest of the book is so flawless.

The author also has a brilliant knack for making the subplot become a main plot where by the end, you realise that what felt like a cosy romcom is actually also a brilliant send up of religion and a deeply philosophical treatise (which occasionally reminded me of Mick Farren’s ‘The Texts of Festival’ and Luke Rhinehart’s ‘Adventures of Whim’).

Funny, endearing and completely engrossing, this Brummie romance is one I definitely recommend to yow.

Ivy Feckett, sometimes called Vee, is an irresistible character. She is smart-
sensitive and shy.
She isn't the party girl. She's too afraid to hit the town with her gorgeous, confident house mates --Maggie and Siobban. When it comes to men, Ivy feels inadequate, incapable, and naive. Ivy's the girl to wear plain-dark clothes... to choose comfort before risk. And when invited out to dinner, Ivy stays home by herself on a Friday night with a hot bath, a glass of wine, and her own imagination.

Ivy 'does' have a playful -healthy imagination under her schmata clothes...( I love this girl). When she took the train to and from work, - a journey which could be "mind-numbingly boring", in itself....she played a sexual game in her head with the different passengers on the train. She put some creative thought, and energy into what their careers were and their body positions.

"Commuting is not good for the human psyche, Ivy decided. It led to twisted attitudes toward's one's fellow human beings".

Sam is her best friend....a geek, who searches for geocaches. They've been friends since school days. Sam is the type of 'guy-friend' every girl has had .... Reliable Sam!
There is not a woman who does not know what I'm talking about here either. Reliable Sam actually is in love with Ivy. As 'our' Sam was with us...right?
What happens to this type of relationship over the years? One of two things.....
Every woman knows the ending 'both' ways from either direct experience or from another friend. One or two ways in this story, too!

Time to introduce heart throb, Ned Hartfield. Tall, tall, and tall! The sound of his voice
is deep, powerful, and conveying confidence. He has perfect complexion...creamy, "Cherubic" with thick black curly hair, turquoise blue eye...."as deep and clear as
Caribbean waters". [Of course, we always want our men better looking than us]. Haha. Actually, my husband Paul, is better looking than me.

It doesn't take long for Ivy to mix love with sex. Ned's masterful hands, muscular arms,
and acts of eroticism --"conceivably illegal" -- were enough for Ivy to realize she was in love.
"Being penetrated from the outside means also that you enclose, engulf, surround, taste, discover. That active and passive are not two opposing and contradictory sides of the same coin but that that which seems passive simultaneously active".

"That to love is to reach beyond yourself, beyond the familiar. It meant to taste the world, to join the world, and at the same time let the world taste you".

I devoured Jay's new novel in one sitting. It's fun, funny, and warm-hearted!
It feels like an old fashion sparky-classic tale .....with a modern creative make-over and a Donkey name Ned!

J. D. Denness
5.0 out of 5 stars Hilarious fun read.
18 August 2016 - Published on Amazon.com
I see what Mr Green is trying here, he is testing the waters, it's been about 2000 years since the first book was released, is the world ready for the sequel to the bible? Here is an sample of what he has been working on:

If the rest of his bible is gonna be of that class then I'm signing up for membership to his cult.

The book contains a brilliant group of characters, the Nerdy Ivy, the best friend Sam, sexy Caroline, awesome Nana, a couple of super sluts and the biggest knob in the literary world (Ned).

The editing is super slick as with his previous book, I could find no fault, no plot holes and no pointless paragraphs. What I did find was myself smirking and getting looks asking what the hell was so funny. I won't say anything about the story, you need to go get yourself a copy and find out for yourself. I'm not a fan of romance stories but this is such a good book you can't help but love it.
Read more
One person found this helpful
Go to Amazon.com to see all 6 reviews 4.8 out of 5 stars
Get FREE delivery with Amazon Prime
Prime members enjoy FREE Delivery and exclusive access to movies, TV shows, music, Kindle e-books, Twitch Prime, and more.
> Get Started
Back to top
Get to Know Us
Make Money with Us
Let Us Help You
And don't forget:
© 1996-2020, Amazon.com, Inc. or its affiliates