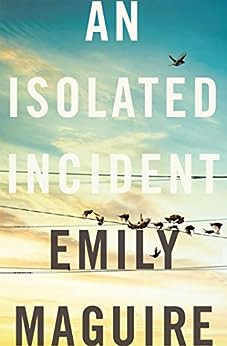 Snatched in broad daylight. --This text refers to the paperback edition.

"Utterly engrossing . . . skilfully constructed narrative. . . . Rather than creating a simple case of goodies and baddies, Maguire subtly examines the complexity of the human personality and what leads somebody to feel destructive. This hugely chilling and evocative story, mixing lyrical language and brutal events, is told with great psychological acuity." --Sydney Morning Herald

"A harrowing, fascinating, compelling work from an accomplished and thoughtful Australian writer who uses the vehicle of a young woman's death to question and explore society's treatment of women, the everyday violence it condones and its intrusive fascination with the murder of pretty young women." --Australian

"This is far more than a page-turning crime drama, though it is also that. Maguire's focus is on those left behind, the often unacknowledged victims of violent crimes. . . . It is a nuanced portrait of a group of flawed characters, male and female, responding to a tragedy. . . . Above all this is a powerful and provocative examination of grief and, in Chris, Emily Maguire has created a character who resounds in the imagination." --Newtown Review of Books --This text refers to an alternate kindle_edition edition.

Snatched in broad daylight. --This text refers to the paperback edition.

Emily Maguire is the author of the novels Taming the Beast (2004) - an international bestseller and finalist for the Dylan Thomas Prize and the Kathleen Mitchell Award - The Gospel According to Luke (2006), Smoke in the Room (2009), Fishing for Tigers (2012) and An Isolated Incident (2016). Emily enjoys a high profile in Australia as a social commentator, with her articles and essays on sex, religion and culture published in newspapers and journals including The Sydney Morning Herald, The Financial Review, The Big Issue and The Griffith Review. --This text refers to an alternate kindle_edition edition.
Read more

3.9 out of 5 stars
3.9 out of 5
93 global ratings
How are ratings calculated?
To calculate the overall star rating and percentage breakdown by star, we don’t use a simple average. Instead, our system considers things like how recent a review is and if the reviewer bought the item on Amazon. It also analyses reviews to verify trustworthiness.

Celia
4.0 out of 5 stars Excellent
Reviewed in Australia on 26 March 2019
Verified Purchase
Explores the aftermath of a brutal murder of a woman in a small town - the investigation of the murder, the media reportage, the grieving process. It's a very bare and honest portrayal of violence against women, and the disturbingly familiar environment in which that violence flourishes. The claustrophobic small town dynamics were particularly well done.
Read more
3 people found this helpful
Helpful
Report abuse

Judy Tyson
4.0 out of 5 stars interesting title
Reviewed in Australia on 16 May 2017
Verified Purchase
loved the bookhad issues putting it down. Characters were excellent and real. A very good narrative which struct me as being honest. so good to see a book set in a rural area of Ausralia . Very descriptive and compelling read. i would encourage anyone to read this book. I shall be searching for further books by this author.b
Read more
One person found this helpful
Helpful
Report abuse

jades666
5.0 out of 5 stars Well written & great read
Reviewed in Australia on 8 April 2017
Verified Purchase
The story had me hooked, I wanted to read it in one sitting. Character's were relatable as was the town the incident takes place in. I enjoyed this book immensely. As for the topic, it reminds us, the impact of violence, can leave the people left behind, forever learning to live with the loss and pain.Its not just headline, to be discussed and analyzed over morning coffee, to be forgotten with the next big news headline.
Read more
2 people found this helpful
Helpful
Report abuse

G. E. Melone
3.0 out of 5 stars Between flimsy and overwrought
Reviewed in Australia on 9 June 2020
Verified Purchase
I’ve read Emily Maguire books before, and really liked them.
This one, not so much.
The topic was current and important, but the execution was a bit flimsy, and repetitious.
Didn’t hate it, but didn’t love it.
Read more
Helpful
Report abuse

Inez Sonjack
4.0 out of 5 stars A slow burn
Reviewed in Australia on 27 April 2016
Verified Purchase
A heart-wrenching insight into how a case of horrific violence against a young woman impacts those left behind. It examines 'frowned-upon' elements of female sexuality and the danger such freedom 'invites'. A compelling & haunting character-based story. Don't read it if you're looking for an action packed whodunit. The ending isn't neat. Read it for a slow burn of emotional turmoil.
Read more
2 people found this helpful
Helpful
Report abuse

kira
TOP 1000 REVIEWER
5.0 out of 5 stars Raw, honest, amazing
Reviewed in Australia on 15 November 2017
Verified Purchase
Maguire boasts an amazing voice, one that is both honest and brutal. This novel of crime in a country town shows us our own obsession with dead, pretty girls. Perhaps, more importantly, is her portrayal of the rippling effect of violence against women. We all know a Chris, we all know a Bella. The truth of this book left me gutted.
Read more
2 people found this helpful
Helpful
Report abuse

Carmen
5.0 out of 5 stars A winner
Reviewed in Australia on 11 March 2017
Verified Purchase
I liked this novels honesty, words plain and simple of the ugliness of life. I liked its honestly of reality and complexity of life. The narrative had life! Couldn't put it down.
Read more
2 people found this helpful
Helpful
Report abuse

W. A. Burt
5.0 out of 5 stars ' stands out like dogs balls '
Reviewed in the United Kingdom on 19 November 2018
Verified Purchase
If only every book I bought was as good as this one.
It was fascinating to follow the repercussions of the rape and murder of a young woman in a small Australian town.And also the way it impacted on the victim's sister and one of the reporters covering the case.
The writing has such fluidity and always manages to sustain the pace and interest throughout.A delicious mix of grief,anger,violence,humour and rooting.
Read more
3 people found this helpful
Report abuse

Amazonian Customer
5.0 out of 5 stars A different take on the crime novel
Reviewed in the United Kingdom on 30 October 2019
Verified Purchase
An Isolated Incident is a different take on the crime novel, focusing on the after effects of a horrific and brutal murder.
The narrative centres on Chris, the victim's older sister, a down to earth, no nonsense barmaid. The other main character is May, a crime reporter determined to make Bella's story matter and follow it to the bitter end. So it's a murder mystery with a difference, told after the event from the perspective of those left behind rather than the investigators or the perpetrators themselves. But it's actually far far more than that. By reflecting the ugliness of the three women's perfectly ordinary worlds - misogyny, victim-blaming, domestic violence, double standards, slut shaming, discrimination - Emily Maguire has written something much more raw, honest and interesting than your average crime novel. I can see why it was shortlisted for so many awards.
Read more
Report abuse

Kindle Customer
5.0 out of 5 stars Great read
Reviewed in the United Kingdom on 24 February 2020
Verified Purchase
I was introduced to this story at a Portsmouth book festival event last night called " Around the World in 10 Books. " I downloaded this as soon as I got home and have been consumed by it all day. It is a murder enquiry but seen from the point of view of the family not the police or the official enquiry. There is much soul searching in the effort to understand , from both the victims sister and the journalist wanting to report it. Insightful is a horrible word but so fitting for this story.
Read more
Report abuse

Candygirl
5.0 out of 5 stars Raw and Urgent
Reviewed in the United Kingdom on 4 October 2019
Verified Purchase
This book is raw and urgent, it describes the effects of a brutal killing, on the sister, the jouranlista no the wider town. The characters are human, flawed and unflinchingly drawn. We care deeply about Chris and May the women at the heart of the novel despite their weaknesses or behaviour. The men of the small Australian town aren't shown in the best light but always with affection. This isn't a crime novel or whodunnit it's a story about loss and pain and the possibility of recovery.
Read more
Report abuse

Kindle Customer
4.0 out of 5 stars Heartwrenching, scary, compelling
Reviewed in the United Kingdom on 31 July 2019
Verified Purchase
More thoughtful than the bog-standard crime novel I was expecting. Veers into paranormal territory as well. Made the mistake of reading at night, stayed up past 3am to finish it and now too unnerved to turn off the light! Would have benefitted from more thorough proofreading, noticed a couple of typos and misplaced apostrophes.
Read more
Report abuse
See all reviews
Back to top
Get to Know Us
Make Money with Us
Let Us Help You
And don't forget:
© 1996-2021, Amazon.com, Inc. or its affiliates