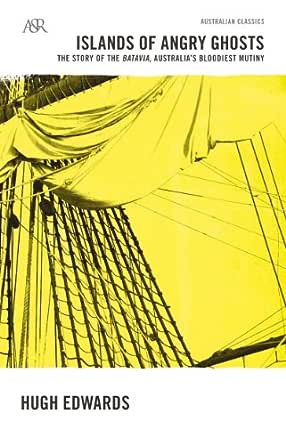 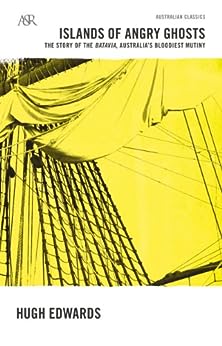 From Hugh Edwards, one of the discoverers of the wreck of the Batavia, comes Islands of Angry Ghosts, an expert and compelling look at one of the most horrific maritime incidents in Australian history. A fascinating story, in print since 1966, Islands of Angry Ghosts is a story in two parts. It traces and re-creates the final months of the Batavia and her crew, pieced together through journals, letters and trial records. It also follows the discovery and salvage of Batavia's wreck by Hugh Edwards and a crew of divers. In 1629, the Dutch East India merchantman the Batavia was wrecked on reef islands off the West Australian coast while on a routine trip to Indonesia. What followed this disaster is a harrowing tale of desertion, betrayal and murder. More than 125 men, women and children were murdered by mutineers caught in a frenzy of bloodlust and greed. By the time the rescue ship finally arrived, months later, the marooned were caught in a desperate battle between soldiers trying to defend the survivors and the mutineers who were bent on leaving no witnesses. More than three hundred years later, Hugh Edwards, a West Australian reporter and diving enthusiast, started to search for the lost ship. When Edwards and his team found the Batavia, they discovered the final piece of a story that has gripped Australians for over a century.

Hugh Edwards OAM is a Western Australian author of 32 books. He is published in six languages in 10 countries. In the Queen’s Birthday Honours List of 2009 he was awarded the Order of Australia Medal ‘For services to Australia’s Maritime Heritage through the discovery of historic shipwrecks and as an author’. Edwards was instrumental in the discovery of important 17th- and 18th-century shipwrecks on the Western Australian coast, and was a leader of diving expeditions to them. He has been recognised as a ‘primary finder’ of the 1629 Batavia and 1727 Zeewyk. He lives in Swanbourne, WA (Perth)

Conrad
5.0 out of 5 stars Fascinatingly spooky
Reviewed in Australia on 27 April 2019
Format: Kindle EditionVerified Purchase
Improving General knowledge. The sociopath villain had syphilis which may have added to his brutality.
Read more
Helpful
Comment Report abuse

Phil Mckenzie
5.0 out of 5 stars None
Reviewed in Australia on 11 August 2014
Format: Kindle Edition
Superb story by one of Australias greatest writers. Enthralling and all true. Who says Australia has no significant history...not Hugh Edwards.
Read more
Helpful
Comment Report abuse
See all reviews from Australia

Hilda Ibrahim
5.0 out of 5 stars Five Stars
Reviewed in the United Kingdom on 18 December 2015
Format: Kindle EditionVerified Purchase
Fascinating read, after I had read the novel based on these events.
Read more
Helpful
Sending feedback...
Thank you for your feedback.
Sorry, we failed to record your vote. Please try again
Report abuse

Kindle Customer
5.0 out of 5 stars True history makes horror stories seem tame
Reviewed in the United States on 23 January 2014
Format: Kindle EditionVerified Purchase
I found that this was really two stories in the one book, and both deserve five stars.
The first story is the history of the shipwreck and the horror of what happens next. To me it seemed more like a cult than a mutiny. The personality of the leader getting others to kill for him to prove their worth and loyalty. So much more chilling when one realises it is all real.
The second story is of the search for the wreak of the Batavia. Which is interesting in its own way, but thankfully doesn't have the violence of the first part of the book.
I found this story fascinating.

Paul Robey
5.0 out of 5 stars Who really discovered Australia?
Reviewed in the United States on 26 May 2016
Format: Kindle EditionVerified Purchase
A very interesting account of European encounters with what would later become Australian territory. Recreation of the story around the Batavia tragedy and its aftermath is very revealing and compelling reading about this little known historical event. Weaving history into the story of finding the wreck and recovering vital historical artefacts is a bonus. Did even earlier European and Asian explorers precede the Batavia to Australian territories?
Read more
Helpful
Sending feedback...
Thank you for your feedback.
Sorry, we failed to record your vote. Please try again
Report abuse

kacka
5.0 out of 5 stars kacka
Reviewed in the United States on 26 October 2012
Format: Kindle EditionVerified Purchase
This book is very well written.I myself am a seaman living and working in Western Australia can fully understand the hardships these poor marooned people wentthru.The town i live in is only 25 miles to the nearest island which is approx 25 miles to the nearest Island in the Abrolhos Island group and aprox 70 miles to the furtherest island being North Island.The Walabi group of Islands being in the centre of both groups where the Batavia wrecked.I have lived and worked on these Islands for many years and I can assure you I wouldnt have wanted to have had the misfortune as those in the days of sail.One of the best written and researched history books of our times.
Read more
One person found this helpful
Helpful
Sending feedback...
Thank you for your feedback.
Sorry, we failed to record your vote. Please try again
Report abuse

Cain McCleary
5.0 out of 5 stars Incredible
Reviewed in the United States on 7 April 2016
Format: Kindle EditionVerified Purchase
I loved this novel. The first half is dedicated to the Batavia mutiny, the second half is about the initial effort to explore the wreck. Well written and informative, it is definitely worth the read for those who are interested in history and who can stomach reading about such a grisly incident.
Read more
Helpful
Sending feedback...
Thank you for your feedback.
Sorry, we failed to record your vote. Please try again
Report abuse
Load more international reviews

John Nicholls
5.0 out of 5 stars Mars time history brought to life by Hugh Edwards.
Reviewed in the United States on 6 November 2013
Format: Kindle EditionVerified Purchase
Excellent account of the sad fate of those upon the Batavia, before and after the wreck, the rescue of survivors and the punishment of the mutineers, followed by the story of the rediscovery of the wreck 300 years later, and recovery of the remains of the ship and it's cargo. Not a dull moment in this book.
Read more
One person found this helpful
Helpful
Sending feedback...
Thank you for your feedback.
Sorry, we failed to record your vote. Please try again
Report abuse

Robert McElhenny
4.0 out of 5 stars Well written
Reviewed in the United States on 15 April 2014
Format: Kindle EditionVerified Purchase
I really liked this book as it was written by the diver who worked on the wreck of the Batavia and with the researcher of the history relating to the incident.
Read more
Helpful
Sending feedback...
Thank you for your feedback.
Sorry, we failed to record your vote. Please try again
Report abuse

DM
5.0 out of 5 stars Five Stars
Reviewed in the United States on 30 March 2016
Format: Kindle EditionVerified Purchase
Excellent account, easily read. A must read for anyone interested in early history
Read more
Helpful
Sending feedback...
Thank you for your feedback.
Sorry, we failed to record your vote. Please try again
Report abuse

Grammer Boy
5.0 out of 5 stars Five Stars
Reviewed in the United States on 7 March 2016
Format: Kindle EditionVerified Purchase
The information is presented so clearly it is sumptuous. A magnificent read.
Read more
Helpful
Sending feedback...
Thank you for your feedback.
Sorry, we failed to record your vote. Please try again
Report abuse
Load more international reviews

Chris Demas
5.0 out of 5 stars Great read..
Reviewed in the United States on 16 February 2014
Format: Kindle EditionVerified Purchase
A very engrossing read. Hat's off to Edwards for being so passionate and following his gut instincts. I couldn't put it down.
Read more
Helpful
Sending feedback...
Thank you for your feedback.
Sorry, we failed to record your vote. Please try again
Report abuse