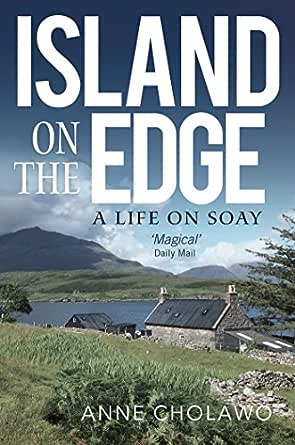 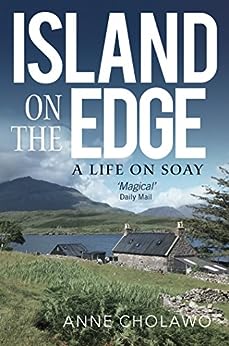 Island on the Edge: an extraordinary journey from city life to rural idyll Kindle Edition

'This is a rather subtle book, all the more convincing for its occasional naiveties and its draughtswoman's plainness of observation... The plainness of the writing is exemplary. There are a couple of heart-stopping sunsets, but mostly we get to know Anne through tiny glimpses and tone-changes. She doesn't make a show of naivety. It also comes through in tiny verbal lapses, as when she mixes up sulphur dioxide (which smells) and carbon monoxide (which doesn't), or when she refers, delightfully, to installing a "hot water gas geezer"' * The National * 'a lovely, gentle tale of a lady who had to wind down to adjust to her new life, which proved to be anything but dull! It will stir the adventurer in all of us!' * Fleetwood Weekly News * 'a remarkable tale of remote living' * Sunday Post *

Anne Cholawo was a typical 80s career girl working in a busy London advertising agency, when in 1989, holidaying in Skye, she noticed an advert for a property on the Isle of Soay – 'Access by courtesy of fishing boat'. She had never heard of Soay before, let alone visited it, but something inexplicable drew her there. Within ten minutes of stepping off the said fishing boat, she had fallen under the spell of the island, and after a few months she moved there to live. She is still there.

When she arrived on the remote west coast island there were only 17 inhabitants, among them the legendary Hebridean sharker Tex Geddes and his family. Today, including Anne and her husband Robert, there are only three. This book describes her extraordinary transition from a hectic urban lifestyle to one of rural isolation and self-sufficiency, without mains electricity, medical services, shops or any of the other modern amenities we take for granted. Anne describes the history of Soay and its unique wildlife, and as well as telling her own personal story introduces along the way some of the off-beat and colourful characters associated with the island, notably Tex's one-time associate, the celebrated writer and naturalist, Gavin Maxwell.
See all Product description

Caroline walker Gibson
5.0 out of 5 stars I totally enjoyed reading this book
4 September 2017 - Published on Amazon.com
Verified Purchase
I totally enjoyed reading this book. I read it slow because I found myself not wanting to finish it quickly. I have yet to travel to the Hebrides, but have read many books about that part of the world. I will go one day soon and when I go,I will think of Anne and her life on the Island on the Edge. She followed her heart and that took courage. By her own admission she was naive and not really prepared for her new life but the pull of that place was so strong she made her life work there.Her strong determination and will pulled her thru hard times and rough conditions. Her neighbors and friends taught her so much and suppported her thru it all. Thank you Anne for sharing your life experiences on Soay.
Read more
One person found this helpful

Deborah Howard
4.0 out of 5 stars Life on one of the Small Isles
28 May 2018 - Published on Amazon.com
Format: Kindle EditionVerified Purchase
Enjoyable discussion of the transition from city girl to all-weather island survivor. Worth a read if the romance of island life is calling you.
Read more
One person found this helpful
Go to Amazon.com to see all 3 reviews 4.6 out of 5 stars
Get FREE delivery with Amazon Prime
Prime members enjoy FREE Delivery and exclusive access to movies, TV shows, music, Kindle e-books, Twitch Prime, and more.
> Get Started
Back to top
Get to Know Us
Make Money with Us
Let Us Help You
And don't forget:
© 1996-2020, Amazon.com, Inc. or its affiliates