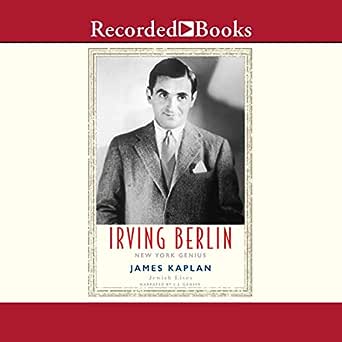 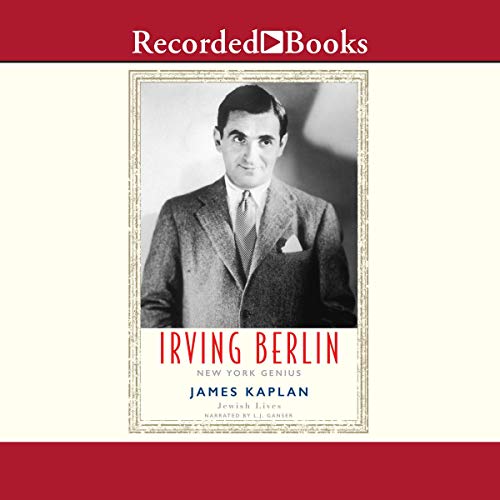 James Connelly
5.0 out of 5 stars Fine Biography -- Wonderful Subject
Reviewed in the United States on 7 December 2019
Verified Purchase
This is a very readable and enjoyable biography of one of the American Songbook's very finest contributors. You really get a sense of what an extraordinary person Berlin was -- yet how realistic about his art and the business side of his art he was. There can perhaps be no real key to how Berlin, an impoverished, young, Russian-Jewish immigrant rose from The Bowery to become not just the toast of New York but also of America, from the shtetl to Broadway, to Hollywood, to the White House, and everywhere else. James Kaplan catalogues the trials and triumphs, the self-doubt, the dedication, and all the elements that made up Irving Berlin. One important thread in his career was his exhausting tour of his musical review "This Is The Army": he took it to service personnel in all the theaters of war around the world -- North Africa, Europe, India and Indochina, Indonesia and the Pacific. Kaplan's discussion of how Berlin's talent infused the American consciousness with "God Bless America," "White Christmas" and "Easter Parade" is insightful.
There was one surprising omission: Kaplan describes how Berlin moved into a beautiful New York town house overlooking the East River for the final four decades of his life (17 Beekman Place at the corner of E. 50th St.) -- around the time he wrote "Call Me, Madam". That musical was a fictional treatment, based on the appointment of Elsa Maxwell as ambassadress to Luxembourg (called "Lichtenbourg" in the play's book). Today that townhouse is the Consulate General of Luxembourg -- a delicious turn of events that Berlin might well have savored.
In sum, a terrific biography that does justice to a terrific subject: An immigrant boy who became a jewel in America's crown.

Blue in Washington (Barry Ballow)
4.0 out of 5 stars Very Readable Biography with One Big Disappointment - 4-
Reviewed in the United States on 6 January 2020
Verified Purchase
Nothing tricky or pretentious about James Kaplan's biography of this very interesting American cultural icon with the extraordinarily long life. He lays out Berlin's story in a strict chronological order and seems to include a background tale for every major piece of work by the composer. The prose is clear and facts all seem well-researched and credible. Much of the story is drawn from family and friends. Berlin, as prolific as his musical writing was, didn't produce much in the way of journals, so there is less first-person story-telling included.

So what was the disappointment in this work? Well, despite the plentiful references to the friendships and professional relationships that Berlin made from his earliest working days; and despite the fact that he created some of the most interesting entertainment works (movies, Broadway shows, etc.) of the 20th Century, this book does not include a SINGLE photograph, illustration or music-related reproduction. And, although there are dozens of references to individual songs written by the composer, there are few or no complete inclusions of lyrics. Predictably, as you read this book and come across works that are familiar enough to get your foot tapping, you aren't provided with the words that can fill in the gaps of your memory. Frustrating for this reader.

Overall, a decent telling of the great man's life with an inexplicable missing piece.

Bill Emblom
4.0 out of 5 stars America's Most Gifted Musical Genius
Reviewed in the United States on 7 February 2020
Verified Purchase
I have previous biographies on Irving Berlin and I'll add this one to my library as well. Berlin rose from the poverty of New York's lower east side to become one of, if not the best, song writer in American history. Author James Kaplan covers his magnificent career in addition to including Berlin's insecurities as well. Berlin would write the songs for one musical and then wonder if there would be any more. Would he be able to write any more memorable songs when so many of those he wrote were failures. One failure was entitled "Smile and Show Your Dimple." However, he was able to keep the melody of that song , change the words, and come up with one of the most memorable songs in American history, namely "Easter Parade."

Berlin kept active hoping to add yet one more musical with his last two being "Annie Get Your Gun" and "Call Me Madam." However, with the advent of rock-and-roll the music written by Irving Berlin had to come to an end. Thankfully his songs live on in American history and available to those who appreciate his music.

Photos would have been nice in the book.

andrew review
5.0 out of 5 stars Great
Reviewed in the United States on 11 January 2020
Verified Purchase
I read Kaplan’s two volume biography of Frank Sinatra and thought it was about the best biography, show biz or otherwise, I’d ever read. His biography of Irving Berlin is almost as good. Kaplan writes like a dream and weaves social history, show business history, the immigrant experience, Jewishness, and Berlin’ personal life into a seamlessly enchanting and enlightening experience. Read it.
Read more
2 people found this helpful
Helpful
Sending feedback...
Thank you for your feedback.
Sorry, we failed to record your vote. Please try again
Report abuse

Bernard . Pucker
5.0 out of 5 stars God Bless Irving
Reviewed in the United States on 25 November 2019
Verified Purchase
A superb and engaging journey over an immense career that responded to the American Jewish dream. The streets are paved with melodies that will be sung for centuries. Eg. White Christmas. Alexander's Ragtime Band. God Bless America. Success comes with pressures and depression and fears of losing your inspiration. All these losses are recorded with balance and taste. A biography of life itself.
Read more
2 people found this helpful
Helpful
Sending feedback...
Thank you for your feedback.
Sorry, we failed to record your vote. Please try again
Report abuse
Load more international reviews

Sam Negri
5.0 out of 5 stars Wonderful read
Reviewed in the United States on 1 January 2020
Verified Purchase
I read it in two days. Hard to put it down. That says it all.
Read more
3 people found this helpful
Helpful
Sending feedback...
Thank you for your feedback.
Sorry, we failed to record your vote. Please try again
Report abuse

Mark Souder
5.0 out of 5 stars Excellent read
Reviewed in the United States on 19 February 2020
Verified Purchase
While I enjoy music, I am not a student of it, nor do I particularly enjoy musicals of any sort. But I found this book to be well written, informative and entertaining. It is hard for me to describe it as nostalgia, since I was not particularly familiar with Berlin nor much of the material. Nostalgia, a warm fuzzy feeling about a past I never experienced nor was previously particularly interested in, is illustrative of a very good writer (and an interesting subject). This is an excellent book.
Read more
Helpful
Sending feedback...
Thank you for your feedback.
Sorry, we failed to record your vote. Please try again
Report abuse

Stephen J. Whitfield
3.0 out of 5 stars Nothing but Blue Skies
Reviewed in the United States on 28 January 2020
Verified Purchase
This biography is recommended for readers interested in a short life of the great composer-lyricist, but disappointingly the author fails to cut deeper into his subject than do previous students of Berlin's amazing career. Though included in the Yale Jewish Lives Series, this book also offers surprisingly little insight into the Jewish context of Tin Pan Alley and its most famous purveyor.
Read more
Helpful
Sending feedback...
Thank you for your feedback.
Sorry, we failed to record your vote. Please try again
Report abuse

Bill Kline
5.0 out of 5 stars Excellent biography of an extraordinary man
Reviewed in the United States on 6 February 2020
Verified Purchase
This is a well written and essential biography of a song writer who's impact is only matched by the Beatles.
Read more
Helpful
Sending feedback...
Thank you for your feedback.
Sorry, we failed to record your vote. Please try again
Report abuse

Douglas C. Worth
5.0 out of 5 stars Berlin, the man and his music
Reviewed in the United States on 24 February 2020
Verified Purchase
Nice weaving of his life and his music
Read more
Helpful
Sending feedback...
Thank you for your feedback.
Sorry, we failed to record your vote. Please try again
Report abuse
Load more international reviews