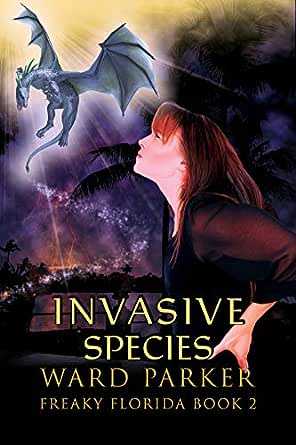 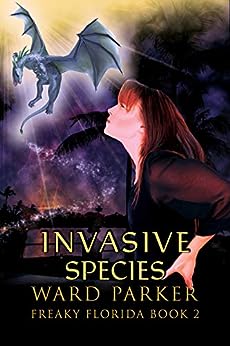 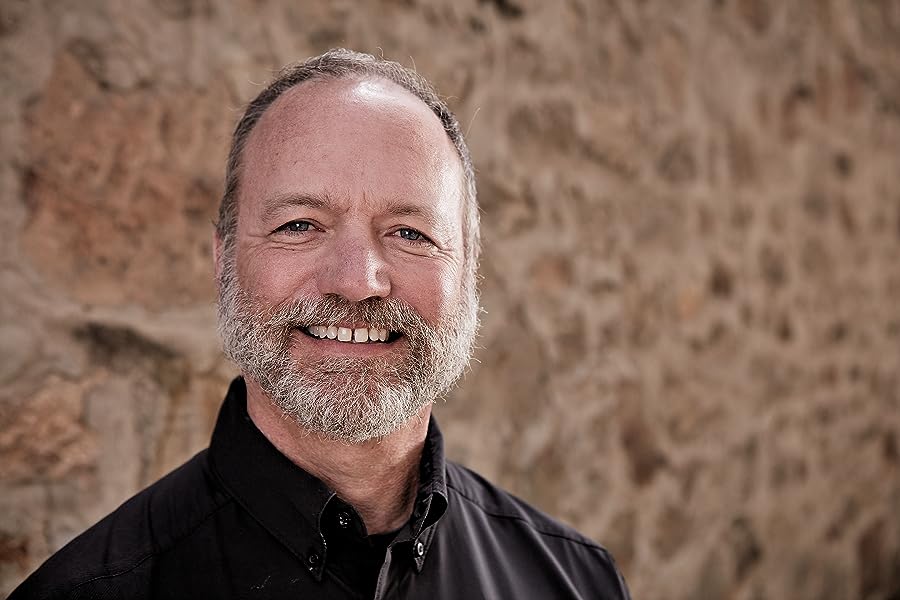 Missy, nurse to elderly supernaturals and budding witch, has two big problems. First, she found a young, injured dragon in the Everglades that has a price on its head. Second, her vampire patient Schwartz has disappeared after getting caught by Customs with werewolf blood. (It’s like Viagra for vampires. Don’t ask.)

There are many bizarre creatures in the Everglades, native and non-native, but who knew dragons were among them? And this isn’t just any young dragon. This is a dragon prophesied to restore its species to greatness. That’s why an evil, ancient god wants to destroy it, and an almost-as-evil CEO tries to capture it. Missy has to protect the dragon while it heals (and snacks on the iguanas in her neighborhood). Too bad she also has to locate and rescue Schwartz before he gets staked. Her best weapon is her not-always-dependable magick. But she is learning that she inherited much more power than she had realized.

Invasive Species is the second book in Freaky Florida, a humorous contemporary fantasy series filled with magic, monsters, and mystery; sarcasm and satire; and, of course, Florida Man. If you love cozy witch mysteries, the thrills of urban fantasy, and a splash of comedy, this series is for you. Think of it as an unholy blend of Amanda M. Lee, Kim Harrison, Jim Butcher, Shayne Silvers, Christopher Moore, and Carl Hiaasen. Grab this book and enjoy a vacation in Jellyfish Beach today.
click to open popover

Emily Pennington
5.0 out of 5 stars Great Humor !!!
17 January 2020 - Published on Amazon.com
What a delightful, funny book! It starts off with Shugg trying to capture a Burmese Python which would earn him around $200. He did catch the snake, in a battle that is definitely worth reading, and as he carried it back to his truck to humanely kill it, he spotted a strange lizard which turned out to be a dragon! Unfortunately, wanting the notoriety of capturing two such creatures, he attempted to take pictures and upload them to social media. But all the fuss disturbed the python, who didn’t appreciate the flames the young dragon was firing all around. It wrapped itself around Shugg’s neck and squeezed. Shugg had thrown the dragon into a large sack before the python put an end to things, however.

Missy Mindle, a home-health nurse and a witch, was lost in the Everglades National Park. She was battling a mosquito she accidently allowed to get into the car, and was swatting at it before it took a pint of her blood. She had been looking for an herb to make her magic potions. Ahead of her on the narrow road was a sack that was wiggling in the road, so she stopped. It seemed to be a strange-looking lizard, but had alligator features … and even looked a bit like a dinosaur! It even had wings! But when it shot flames at her, she knew it was a young dragon! She got the sack off of it with a coat hanger and noticed the broken wing. She was going to have to call Dr. Hyde who made house calls for their clients: elderly supernatural and mythical creatures, such as vampires, werewolves and other shifters, trolls, and ogres. There were apparently a surprising number of them in Florida. But she’s not the only one who knows about the dragon now, and others want him for their own reasons. Can she save the dragon? She is only starting to come into her own with her witch powers. And there are formidable opponents out there who will be searching for her “patient”.

This was a terrific book with so much going on. Because I couldn’t stop chuckling, I also bought Book 1! The characters are wonderful, the story line fast-paced and suspenseful! You won’t want to miss this one.
Read more
One person found this helpful

deb o
5.0 out of 5 stars AWESOME!!!
17 January 2020 - Published on Amazon.com
This was an awesome book that I really enjoyed. The story and characters grabbed me from the beginning and I couldn't stop reading. I loved the characters and watching them grow together, they were well written and went well together. I found this book amazing with great word building making me feel apart of the story and watching it unfold in front of me. A definite must read for any fan and I can't wait to read more from this author!!!

I received a free copy of this book via Booksprout and am voluntarily leaving a review.
Read more
One person found this helpful

Jennifer Swan
5.0 out of 5 stars Creative and lots of fun!
18 January 2020 - Published on Amazon.com
This book was a very fun read. Creative supernatural world-building, well written, interesting characters and different from anything else I’ve read recently. Witches, shifters, invasive species, vampires, gods, dragons, demons, and much more, set in the Everglades area. Over the top in all the best ways!

Even though it is book 2 in the series, it read just fine as a stand-alone volume. I missed book 1, but I’m going to have to be sure to go back and read it.

I received this as an ARC and chose to review it.
Read more
One person found this helpful

Tina L
5.0 out of 5 stars Page turning excitement all the way thru!
18 January 2020 - Published on Amazon.com
This installment of Missy's adventures was deffinitely exciting thru the entire book! I absolutely LOVED how Missy stepped-up, took care of and protected not only little Ronnie, but the dragons and their secrecy as well. I am really looking forward to the next adventure in this series, including what Ronnie's further adventures may be, as well as Missy's, as it was left with a thought that she may have more wonderful adventures with the dragons.
Thank you Mr. Parker for yet another great read!
Read more
One person found this helpful

RichmondReader
5.0 out of 5 stars Missy's supernatural adventures continue
16 January 2020 - Published on Amazon.com
Missy is learning more about her supernatural talents. She rescues a wounded and partially snared dragon. It is a lot of fun watching as she discovers that there is so much more to the supernaturals than vampires, werewolves and witches. The story is fun and a quick read as Missy, Matt, and her vampire friends from Squid Towers take on the baddies. I loved Ronnie, the dragon's character.

I received a free copy of this book via Booksprout and am voluntarily leaving a review.
Read more
One person found this helpful
Go to Amazon.com to see all 8 reviews 5.0 out of 5 stars
Get FREE delivery with Amazon Prime
Prime members enjoy FREE Delivery and exclusive access to movies, TV shows, music, Kindle e-books, Twitch Prime, and more.
> Get Started
Back to top
Get to Know Us
Make Money with Us
Let Us Help You
And don't forget:
© 1996-2020, Amazon.com, Inc. or its affiliates