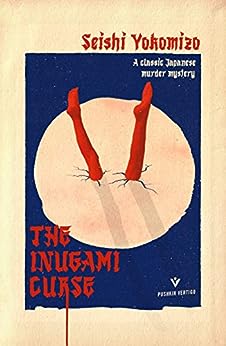 The Inugami Curse: A classic Japanese murder mystery from the author of The Honjin Murders (Pushkin Vertigo Book 29) Kindle Edition

The diabolically twisted plotting is top-notch. -- The New York Times Book Review [A] stellar whodunit. . . Yokomizo creates a palpable sense of menace throughout with grim foreshadowing of the carnage to come. The solution is a perfect match for the baffling puzzle. Fair-play fans will hope for more translations of this master storyteller. -- Publishers Weekly (starred review) 'Japan's Agatha Christie . . . It's an absolute pleasure to see his work translated at last in these beautifully produced English editions.' -- The Sunday Times 'This is Golden Age crime at its best, complete with red herrings, blind alleys and twists and turns galore... A testament to the power of the simple murder mystery and its enduring appeal.' -- The Spectator 'One of Yokomizo's best-loved detective tales -- Kindaichi must solve a slowly growing string of gruesome murders all connected to the mighty Inugami Clan, and uncover the deeply hidden secrets of the clan along the way.' -- Metropolis Japan '2020 may be the year of Seishi Yokomizo . . . Both [The Honjin Murders and The Inugami Curse are] set in the late 1930s/early 1940s, they promise to be atmospheric, exciting and knotty whodunits. The covers alone are enough to get any fan of the genre salivating.' -- Japan Times 'The master of Japanese crime.' -- Tuttolibri --This text refers to an alternate kindle_edition edition.

Seishi Yokomizo (1902-81) was one of Japan's most famous and best-loved mystery writers. He was born in Kobe and spent his childhood reading detective stories, before beginning to write stories of his own, the first of which was published in 1921. He went on to become an extremely prolific and popular author, best known for his Kosuke Kindaichi series, which ran to 77 books, many of which were adapted for stage and television in Japan. The Inugami Curse is one of Kindaichi's most famous mysteries and has twice been adapted for film in Japan. --This text refers to an alternate kindle_edition edition.

4.3 out of 5 stars
4.3 out of 5
391 global ratings
How are ratings calculated?
To calculate the overall star rating and percentage breakdown by star, we don’t use a simple average. Instead, our system considers things like how recent a review is and if the reviewer bought the item on Amazon. It also analyses reviews to verify trustworthiness.

Moscool -
4.0 out of 5 stars Second episode - gets into its stride
Reviewed in the United Kingdom on 21 May 2020
Verified Purchase
More Japanese murder mystery. This is not the second volume written but the second translated.

The scene is set in post-war Japan, in a rural setting just touched by modernity. The plot is clever and the author drops enough hints to engage the reader's 'little grey cells' to quote a famous detective.

Some of the descriptions of characters and their idiosyncrasies are a bit repetitive, and you feel this tome could have been 10% shorter. The novelty effect is not as strong as when you discover the writing style in the first volume of course. Still I will probably buy the third tome when it comes out...
Read more
3 people found this helpful
Report abuse

R. Hills
4.0 out of 5 stars Christie goes East
Reviewed in the United Kingdom on 17 July 2020
Verified Purchase
I rarely read murder mysteries but was intrigued by the Japanese setting so decided to give this a go. If you enjoy classic crime fiction this shouldn't disappoint. In the aftermath of the Second World War the members of a Japanese silk tycoon's family gather at his country villa for the reading of his will. One of them has already had attempts made on their life, and another lies dead. Soon more will die. Luckily ace detective Kindaichi is on hand to sort things out.

The story is a well constructed puzzle with enough clues for the reader to piece together the solution. Unfortunately the detective Kindaichi is not a terribly interesting character; he's a bit scruffy, and scratches his head and stutters in moments of stress and.. that's about all. The rest of the cast aren't much better, but then these kinds of novels are all about the twisty plot and macabre deaths rather than deep character development. The Inugamis' closet has a lot of skeletons and they are all on view by the last page. On the other hand, Yokimizo has a talent for conjuring mood through vivid descriptions of the landscape and weather. The translator has done a terrific job and the text never reads awkwardly. At about 240 pages it's a quick, fun read.
Read more
6 people found this helpful
Report abuse

A. V.
5.0 out of 5 stars Fascinating, unique style
Reviewed in the United Kingdom on 25 February 2020
Verified Purchase
Only found out about the existence of this series of detective stories set in post war Japan from The Guardian.
Just finished the Inugami Curse. Fascinating. Unique style. Enjoyed the journey. On to the second novel with great expectations.
Read more
4 people found this helpful
Report abuse

B. Humphreys
5.0 out of 5 stars Worthy of Midsomer
Reviewed in the United Kingdom on 15 May 2020
Verified Purchase
I feel I've found a new favourite detective! The murders that follow on from the reading of the will of a wealthy business owner are as bizarre and symbolic as anything that has happened in Midsomer! It's a complex and sometimes gruesome tale of love and greed, injustice and retribution. You need to read with attention to cope with every twist and turn, but the writing is clear and somehow elegant (is that down to the author or the translator?). I can't wait to read more
Read more
One person found this helpful
Report abuse

Intheamazone
4.0 out of 5 stars Classic Crime....
Reviewed in the United Kingdom on 7 October 2020
Verified Purchase
Classic Crime.....
Classic crime from Japan. Cleverly and intricately plotted. When the head of the incredibly wealthy Inugami clan passes his family gathers for the reading of the will. Thus begins a series of bizarre and disturbing murders. A gruesome puzzle, well executed with an interesting detective in Kindaichi. A treat from the Golden Age of crime.
(Many thanks to NetGalley/ Publisher/ Author)
Read more
One person found this helpful
Report abuse
See all reviews
Back to top
Get to Know Us
Make Money with Us
Let Us Help You
And don't forget:
© 1996-2021, Amazon.com, Inc. or its affiliates