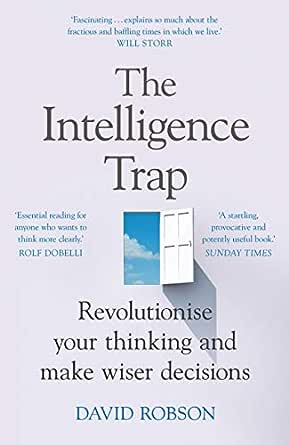 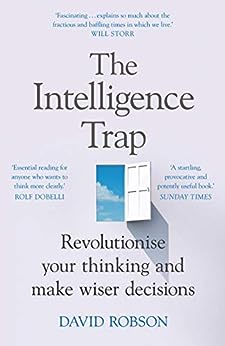 A fascinating and enjoyable investigation of what intelligence is and isn't, by one of the most exciting new voices in science writing. This thought-provoking and brilliantly researched guide to achieving true wisdom shows us how to be smarter--and how to protect ourselves from the cleverest fools.--Gaia Vance, author of Adventures in the Anthropocene

An engrossing standout in the thinking genre that will appeal to anyone who has ever been wrongheaded.

The Intelligence Trap combines mesmerizing storytelling with groundbreaking new research about why having a high IQ can backfire. Essential reading for anyone who wants to think more clearly.--Rolf Dobelli, author of The Art of Thinking Clearly

The Intelligence Trap is a ceaselessly fascinating book written by one of our most consistently superb science writers. Its counter-intuitive argument, that intelligence is no inoculation against wrongness, explains so much about the fractious and baffling times in which we live.--Will Storr, author of Selfie

It is time for us to learn a new way of thinking: a cognitive toolkit to navigate intelligence traps, fake news and to maximise our potential.
See all Product description

Amazon Customer
5.0 out of 5 stars Better than " Emotional Intelligence"
Reviewed in Australia on 18 October 2019
Format: Kindle EditionVerified Purchase
This is a great book. It is a book about "emotional intelligence" for smart people! There is a solid evidence basis to the arguments and lots of good tips for the 21st Century citizen.
Read more
Helpful
Comment Report abuse
See all reviews from Australia

Harun Mushod
2.0 out of 5 stars Interim review: WARNING - don’t buy kindle edition of this book
Reviewed in the United Kingdom on 8 July 2019
Format: Kindle EditionVerified Purchase
This isn’t intended to be a review of the book, but of the format. I’ll come back and review the book itself when I’ve finished it.

The kindle edition is showing early signs of being put together carelessly. Two examples:

1. In the introduction there is a teaser set with the explanation set out on p. 270. There’s no page numbers just location numbers, so the referred to page is hard to find.

2. There is a set of graphs in chapter 1 but the details of the graphs are blurred and unreadable.

It doesn’t inspire confidence that the kindle edition of this book was put together with any care. If you are buying this book, get the hard copy, from a bookshop.

Mr. Paul D. Spicer
3.0 out of 5 stars More than one Intelligence Trap
Reviewed in the United Kingdom on 11 November 2019
Verified Purchase
This book doubtless gives plenty of evidence of poor thinking on the part of otherwise intelligent people, and gives some techniques for improving our rational thinking. However, I do think that the author suffers from an intelligence trap of his own. Like one other reviewer here, I find the author's blinkered rejection of all paranormal phenomena, typical of material scientists, unfortunate. The evidence that consciousness is non-physical and that paranormal phenomena such as clairvoyance do exist is large and increasing. The wise, open-minded person would not dismiss it lightly.
Read more
One person found this helpful
Helpful
Report abuse

Some Bloke
1.0 out of 5 stars Not very intelligent.
Reviewed in the United Kingdom on 11 October 2019
Verified Purchase
I can't recall what prompted me to buy this, probably a recommendation on some otherwise sensible blog.
There is a lot of verbiage in the book but it's all a bit "Readers Digest" and "Scientists Say..." to the extent that I've stopped reading it about half way through. The author's background is with "New Scientist" and the BBC which possibly explains the shallowness of the writing and some of his biases - particularly noticeable with his uncritical belief in "Climate Change" Alarmism. If your aim is to "Revolutionise your Thinking and Make Wiser Decisions" I'd suggest buying some other book than this one.
Read more
One person found this helpful
Helpful
Report abuse

Agora
4.0 out of 5 stars Couldn’t put this down
Reviewed in the United Kingdom on 18 July 2019
Verified Purchase
Great evidence based insight into why most of us hold onto biased and sometimes ludicrous opinions
Read more
One person found this helpful
Helpful
Report abuse

Dushyant dagar
5.0 out of 5 stars This is interesting !
Reviewed in India on 29 July 2019
Verified Purchase
About Product: Nice Pages, smells good, Quality hard cover, Nice mint greenish color though of the cover, Good job by the publisher.

Amazon Customer
4.0 out of 5 stars Interesting psychological concepts in layman's terms
Reviewed in Canada on 29 June 2019
Verified Purchase
I thoroughly enjoyed this book. It is well researched, with numerous citations from academic papers. The anecdotes were particularly interesting. As part of his overall discussion the author examined the emerging study of evidence based wisdom.
Read more
Helpful
Report abuse
Load more international reviews

Plantaginis
4.0 out of 5 stars Very interesting and useful content, but writing style could be better
Reviewed in Germany on 4 August 2019
Verified Purchase
You'll learn that IQ is not that important for success, and what makes person rational. However, descriptions could be more precise sometimes, and I'd prefer definitions of terms given in text in emphasized way.
Read more
Helpful
Report abuse

Amazon Customer
5.0 out of 5 stars Don't guess, don't dismiss before you find the facts.
Reviewed in Canada on 21 October 2019
Verified Purchase
Exciting, eye opening book on the pitfalls of our own intilegence, our mental prejudices and how it can blind us from the goal of 'objective, evidence based intelligence'.
Read more
Helpful
Report abuse