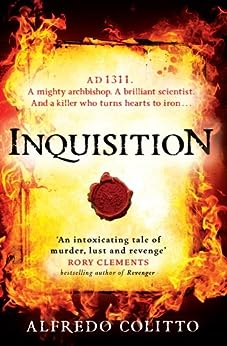 by Alfredo Colitto (Author) Format: Kindle Edition
See all formats and editions
Sorry, there was a problem loading this page. Try again.

In 14th-century Italy, Mondino is a university anatomist - a man of science in a land governed by the brutal Inquisition. But the corpse brought to Mondino's laboratory one stormy night defies natural law: The victim is a Templar knight, and his heart has been transformed into a block of iron.

Is it alchemy? Or the diabolical work of an ingenious killer? Aided by his headstrong student Gerardo - a young man concealing a deadly secret identity - Mondino must outwit both ruthless Inquisitors and vengeful Templars if he's to stop a murderer whose methods don't just freeze the blood . . . but turn it to stone.

Audacious, gripping, and lushly atmospheric, set against the dramatic backdrop of one of history's most turbulent and dangerous eras, this masterful thriller will delight fans of CJ Sansom and Rory Clements --This text refers to the digital edition.

Alfredo Colitto was born in Campobasso, studied in Bologna and was living in Mexico when he wrote his first novel. He has since written several other novels and numerous short stories. He works as editor and translator with some of the major Italian publishing houses, writes for film and television, and teaches creative writing at the School of Bologna. --This text refers to the digital edition.

Alfredo Colitto is the author of six novels. He lives in Bologna. --This text refers to an alternate kindle_edition edition.
Read more

4.0 out of 5 stars
4 out of 5
20 global ratings
How are ratings calculated?
To calculate the overall star rating and percentage breakdown by star, we don’t use a simple average. Instead, our system considers things like how recent a review is and if the reviewer bought the item on Amazon. It also analyses reviews to verify trustworthiness.

The Keen Reader
5.0 out of 5 stars Brilliant historical novel
Reviewed in the United Kingdom on 15 November 2011
Verified Purchase
I really really really enjoyed this book - I'm always a little bit wary of books translated into English - sometimes they just don't seem to flow as I imagine they would in their native language. But this book, and its translation, really flowed beautifully. The language was perfect.

But even beyond that, the story itself was absolutely brilliant. What a great concept - the mysterious death of a man who appears to have been a Templar, at the time when being a Knight Templar was in itself a dangerous occupation. The novel is set in Bologna, already a city in a region torn by long-standing Ghibelline and Guelph allegiances. More than that, the Church under Pope Clement V and King Philip IV of France are setting up actions against the Templars, and attempting to make those stick across the whole of Europe. The Inquisition in Bologna is keen to do their duty by the Church, particularly under the auspices of the really nasty Uberto. So when Mondino, an anatomist who really just wants to be left alone to work on his medical theories (also a touchy point with the Church at this time), finds himself caught up in conspiracy theories and unsolved mysteries which also seem to involve occult powers, it really becomes a race against so many factors to work out what's going on and why.

The characters are really well-developed in this book - they all stand out from the page, and are well characterised. The story races along - I found myself turning the last 50 pages at the rate of knots, absolutely frantic to find out what was going to happen next. The setting is very evocatively drawn for the reader - medieval Bologna, the Church, the life led by the people in these places at these times - it all rang true, and worked really well - there was nothing that jarred my historical senses at all. Clearly the author really knows his stuff. I haven't found any others of his books in English - hopefully these will appear on the market soon - I'd love to read some more of his works. Highly recommended for any reader who loves medieval mysteries.
Read more
3 people found this helpful
Report abuse

Plucked Highbrow
3.0 out of 5 stars Fun but not taxing
Reviewed in the United Kingdom on 16 June 2013
Verified Purchase
'A brilliant thriller to rival CJ Sansom' says the blurb on the jacket. Well it's not brilliant, it's not very thrilling and I don't think CJ Sansom has any need to worry about this rivalling him. Having said all that, 'Inquisition' is an entertaining, quick read that is enjoyable and a little bit different.

Set in Bologna in the 14th Century and base around themes of alchemy and science, Colitto has linked different concerns adeptly. The central character Mondino is a physician who is determined to progress scientific knowledge, even if that brings him into conflict with the Catholic Church and the Inquisition in particular. The trial of the Templar knights sits in the background whilst the central narrative is about the gruesome deaths of two templars.

It's not a hard read, it's not highbrow but it is good fun.
Read more
One person found this helpful
Report abuse

Topolino
3.0 out of 5 stars Ok - not as good as CJ Samson
Reviewed in the United Kingdom on 9 February 2013
Verified Purchase
Not as good as CJ Samson...a little on the far fetched side for me.
Still a good 'holiday read' as the Middle Ages atmosphere is well portrayed.
Read more
Report abuse