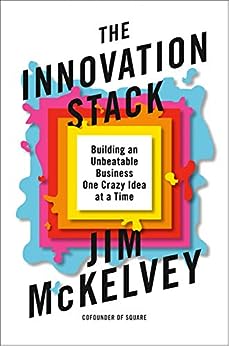 The Innovation Stack: Building an Unbeatable Business One Crazy Idea at a Time Kindle Edition

by Jim McKelvey (Author) Format: Kindle Edition
See all formats and editions
Sorry, there was a problem loading this page. Try again.
From the cofounder of Square, an inspiring and entertaining account of what it means to be a true entrepreneur and what it takes to build a resilient, world-changing company

In 2009, a St. Louis glassblowing artist and recovering computer scientist named Jim McKelvey lost a sale because he couldn't accept American Express cards. Frustrated by the high costs and difficulty of accepting credit card payments, McKelvey joined his friend Jack Dorsey (the cofounder of Twitter) to launch Square, a startup that would enable small merchants to accept credit card payments on their mobile phones. With no expertise or experience in the world of payments, they approached the problem of credit cards with a new perspective, questioning the industry's assumptions, experimenting and innovating their way through early challenges, and achieving widespread adoption from merchants small and large.

But just as Square was taking off, Amazon launched a similar product, marketed it aggressively, and undercut Square on price. For most ordinary startups, this would have spelled the end. Instead, less than a year later, Amazon was in retreat and soon discontinued its service. How did Square beat the most dangerous company on the planet? Was it just luck? These questions motivated McKelvey to study what Square had done differently from all the other companies Amazon had killed. He eventually found the key: a strategy he calls the Innovation Stack.

McKelvey's fascinating and humorous stories of Square's early days are blended with historical examples of other world-changing companies built on the Innovation Stack to reveal a pattern of ground-breaking, competition-proof entrepreneurship that is rare but repeatable.

The Innovation Stack is a thrilling business narrative that's much bigger than the story of Square. It is an irreverent first-person look inside the world of entrepreneurship, and a call to action for all of us to find the entrepreneur within ourselves and identify and fix unsolved problems--one crazy idea at a time.
Read more
Previous page
Next page

The co-founder of Square outlines an inspiring philosophy of entrepreneurship, telling the story of how his company was born out of a passion to solve frustrating problems in both business and society, and giving entrepreneurs a strategic guide to building a resilient business. --This text refers to the hardcover edition.

James McKelvey is a serial entrepreneur, inventor, philanthropist and artist.

He is the cofounder of Square, was chairman of its board until 2010, and still serves on the Board of Directors. In 2011, his iconic card reader design was inducted into the Museum of Modern Art.

In 2016, McKelvey founded Invisibly, an ambitious project to rewire the economics of online content.

In 2017, he was appointed as an Independent Director of the St. Louis Federal Reserve. --This text refers to the hardcover edition.

"McKelvey tells the remarkable story of how with Square, he started a business that would transform an industry, along the way unlocking a whole new model for innovation. An inspiring call to action for entrepreneurs who want to tackle problems that affect our everyday lives, with perseverance and some crazy ideas." --Steve Case, chairman and CEO of Revolution, cofounder of AOL, and author of The Third Wave: An Entrepreneur's Vision of the Future "The Innovation Stack is a deeply useful book about the characteristics of successful companies and how and why to build one, complete with inspiring case studies that literally span centuries. But it's also much more than that: a witty, humane exploration of living in the complicated, inequitable world we all share and are working to make it less so." --Eric Ries, entrepreneur and bestselling author of The Lean Startup "Who can say they went up against Amazon--and won? Jim McKelvey can, and this book tells how." --Peter Thiel, entrepreneur, investor, and author of Zero to One "Growing up in the Show Me State--aka Missouri--made me skeptical of everything . . . especially Jim McKelvey. I'd say more but I'm out of charact" --Jack Dorsey, cofounder and CEO of Twitter and Square
--This text refers to the hardcover edition.
Read more

4.6 out of 5 stars
4.6 out of 5
272 global ratings
How are ratings calculated?
To calculate the overall star rating and percentage breakdown by star, we don’t use a simple average. Instead, our system considers things like how recent a review is and if the reviewer bought the item on Amazon. It also analyses reviews to verify trustworthiness.

Cece
5.0 out of 5 stars A good read by itself but also a concise and straightforward account of innovation in 21st Century
Reviewed in the United Kingdom on 11 March 2020
Verified Purchase
I did a case study on Square for a tech management course and was struck at how under the radar they are and how game changing they were without much fan fair. So I bought this mainly to fill in the gaps for what I couldn't find out at the time. But it really shines as a more useful introduction to innovation, as that was something I struggled a lot with on my course. It's funny how the author describes a college professor despairing at students in his entrepreneur class because I was definitely making a lot of the same mistakes. There's a short bio on how the company started and the it dives into really useful case studies in a very understandable manner. There's quite a shocking incident towards the end of the book when the author explains why and how he started a coding initiative called Launchcode.

I appreciate the honest and down to earth tone of the book in contrast to the almost gossip magazine style of writing in tech journalism these days. It was a very interesting read. Definitely recommend.

Sheel Shah
5.0 out of 5 stars This book will awaken entrepreneurship
Reviewed in the United Kingdom on 14 March 2020
Verified Purchase
If, like me, you have been pondering taking the leap and starting your own venture, this book is incredibly inspiring. Jim shares a unique viewpoint about entrepreneurship (no not business) that has forever upgraded my mindset and settled questions for me such as "What special powers do great innovators have?" (spoiler: none). Through his wonderful stories and deep insights, Jim makes innovation accessible to all. I can't wait to find my "perfect problem" to solve.
Read more
Report abuse

George L
5.0 out of 5 stars I’ll definately read it again ! Lots to learn from this book !
Reviewed in the United Kingdom on 21 August 2020
Verified Purchase
I loved it ! The story and the facts combines very well. It’s easy to understand and makes a very good and realistic point . I recommend this book for people who want to start a business or thinking of doing that in the future. It’s motivational and realistic in the same time.
Read more
Report abuse

Natarajan Mahalingam
5.0 out of 5 stars Must-read, explosive book on innovation/startup mindset!
Reviewed in India on 12 June 2021
Verified Purchase
If there could be a trilogy of books on entrepreneurship, similar to the Lord of the Rings, I would place Zero to One, The Lean Startup, and The Innovation Stack in that list. Where Zero to One starts about the process of getting into the startup culture and The Lean Startup on the processes to manage your entrepreneurial idea, The Innovation Stack focuses on understanding the reasons or rationale for the success of the startup

Across 18 exciting chapters, Jim McKelvey takes us along on his journey, along with Jack Dorsey on creation of Square - the writing is both explosive and internalizing at the same time. The author's humility and vulnerability shine throughout the pages - there's no great joy at defeating Amazon in the payment's game, nor any chest beating - simply, a subtle thought on how Square could've possible defeated the behemoth that Amazon is

While trying to understand the potential reasons Square's innovation stack caused Amazon to exit the market, the author's research into 4 similar paradigm-changing personalities are described in great detail. The journey of Christopher Columbus, A.P. Giannini of Bank of America, Herb Kelleher of Southwest airlines, IKEA's Kamprad are detailed in an interesting manner by the author

The author concludes the last of the chapters under "Innovation physics" heading, dwelling on some of the often-quoted success factors for a startup and the culture thereof. Even when talking about the theory, the author's down-to-earth attitude and unassuming character traits come to the fore - which makes it easier to read (an otherwise unbelievable story of how a startup SQUARED UP against the biggest behemoth on earth currently!)

For anyone interested in the innovation/startup culture, The Innovation Stack is a must-read and I hope you love reading the book as much as I did. A huge thanks to Jim McKelvey for the book - one that I am sure I will read many times again!

Bookgains
4.0 out of 5 stars Informative and useful
Reviewed in India on 12 July 2021
Verified Purchase
James McKelvey is a serial entrepreneur, inventor, philanthropist and artist.
He is the cofounder of Square, was chairman of its board until 2010, and still serves on the Board of Directors. In 2011, his iconic card reader design was displayed at the Museum of Modern Art.
In 2016, McKelvey founded Invisibly, an ambitious project to rewire the economics of online content.
In 2017, he was appointed as an Independent Director of the St. Louis Federal Reserve.

Why you should read this book?

The Innovation Stack is a deeply useful book about the characteristics of successful companies and how and why to build one, complete with inspiring case studies that literally span centuries.

How did Square beat the most dangerous company on the planet? Was it just luck? These questions motivated McKelvey to study what Square had done differently from all the other companies Amazon had killed. He eventually found the key: a strategy he calls the Innovation Stack.
Read more
One person found this helpful
Report abuse
See all reviews
Back to top
Get to Know Us
Make Money with Us
Let Us Help You
And don't forget:
© 1996-2021, Amazon.com, Inc. or its affiliates