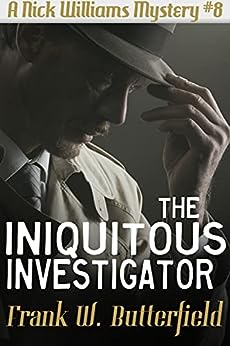 Julian
5.0 out of 5 stars Book 8 in an ongoing series.
Reviewed in the United Kingdom on 5 November 2018
Verified Purchase
I enjoyed the first book in this series. Jumping to this later volume might have been difficult but the author manages to avoid any major continuity glitches or infodumps. Nick and his husband Carter continue their crusade (not too strong a description of the use to which Nick puts his wealth). Here they find themselves very much in the firing line after their diner of choice becomes a no go area and they eat elsewhere. Homophobia and racial prejudice abound in this time period of course - and there is also a thread of possible domestic abuse.

Readers familiar with the series will need to urging - new readers should enjoy the period detail but may find some attitudes uncomfortable, even if they reflect the period.
Read more
Report abuse

Ulysses Grant Dietz
4.0 out of 5 stars Book 8 in the series and still going strong.
Reviewed in the United States on 15 March 2017
Verified Purchase
Having recently read Steve Neil Johnson’s wonderful “The Yellow Canary,” set in Los Angeles in 1956, I was reminded of Frank Butterfield’s distinctive approach to the dark side of gay life in the bad old days. Both of these novels focus on the lives of gay men and women in 1950s America, and how deep-rooted, but unjust, prejudice produced grossly illegal actions against gay folk at nearly every level of law and politics in the nation. In light of early 21st-century civil rights attitudes (which I suppose might be imperiled by today’s political atmosphere), the way people of color and gay people were treated is almost unbelievable. Both Johnson and Butterfield are trying to bring those injustices to life. Johnson’s book is darker and (I’m afraid) more realistic, in spite of its ultimate optimism. Frank Butterfield’s Nick Williams is—as I say every time I review one of this series—a sort of gay superhero. Nick’s vast fortune is his superpower, and he uses it for the good of all oppressed people, but especially for those men and women “in the life,” whom he embraces as his people.

There’s a kind of “aw shucks” sweetness to the Nick Williams stories that makes them feel rather like a television series of the period (and indeed, Perry Mason was one of Butterfield’s inspirations). Nick and his longtime partner Carter Jones call each other “husband,” much to the amusement of their friends and family.

But book 8 in the series takes Nick and Carter to a darker place: they are arrested for vagrancy in Sausalito, when they try to report being accosted by a group of young men intent on gay-bashing them. The jaw-dropping injustice—unconstitutionality—of the whole procedure is hard to grasp in light of modern law, and yet it falls well within the kind of action that both politicians and police were inclined toward in the years before gay liberation really began to take off.

As always, there is a sub-plot that involves Carter’s family; and another one that requires flying around in one of their private planes—because what’s a superhero without his toys, right? The richness of the story is amplified by all of the various characters who swirl around Nick and Carter’s world.

I love these books, but they are fairy tales. There is rich truth in them, historical truth that we need to keep in mind; but their sunny atmosphere belies the real fear that gay folk felt (and black people and any minority subject to the whim of those in power) in the years after McCarthy’s fall, when conformity was the only safe path to the American dream.

Book 9 is already on my Kindle. I suppose I’ll get bored someday, but today is not that day.
Read more
4 people found this helpful
Report abuse

PhxRick
5.0 out of 5 stars Always a joy to read.
Reviewed in the United States on 19 March 2018
Verified Purchase
The entire Nick Williams series has been a joy from beginning to end. More than figuring out who-done-it, it's a pleasure to get to know all the good guys in Nick's circle of friends. Since the books are written in the first person, it's almost like reading Nick's diary. I am reminded of the characters from Star Trek TOS not because of any SciFi references but because, not matter how things are going, even if the principals may become miffed with one another from time to time, they quickly manage to love and respect one another again within a page or two: it's always more about them than it is about the case they're working on.

The books also serve as a timely reminder of how things were for people "in the life" back in the 50's; not always a bed of roses.
Read more
Report abuse

silvia
5.0 out of 5 stars Love this series
Reviewed in the United States on 5 August 2019
Verified Purchase
I love this book, this series. This author sure knows how to weave a tapestry of the atrocities that went on in the 50s with Nick and Carter’s loving relationship. It had me sobbing in parts due to the injustice that went on and then a few pages later amid all the turmoil I’d read of Nick and Carter’s boundless love for each other and my heart was full of joy. Even through the dark clouds their relationship was rock solid I tell you. The world building and depth of all the characters is second to none.
Read more
Report abuse
See all reviews
Back to top
Get to Know Us
Make Money with Us
Let Us Help You
And don't forget:
© 1996-2021, Amazon.com, Inc. or its affiliates