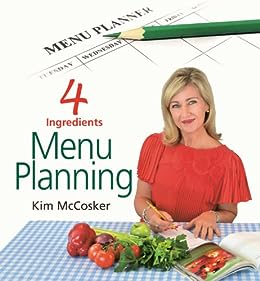 by Kim McCosker (Author) Format: Kindle Edition
See all formats and editions
Sorry, there was a problem loading this page. Try again.
Read more Read less
Previous page
Next page
Due to its large file size, this book may take longer to download

4 Ingredients author and entrepreneur Kim McCosker loves to inspire readers and audiences with her simple, hard working, and determined recipe for success. As a busy wife and mum to three boys, Kim McCosker holds a Degree in International Finance, trained as a Financial Planner, and is a self-taught cook.

Putting into practice her mantra of “Family First,” Kim’s concept created the most successful book title in Australia—4 Ingredients—with cookbook sales now spanning three continents, twenty-six countries, and six foreign languages! As the highest self-published author in Australian history, Kim’s continued aim with 4 Ingredients is to simplify all forms of cooking by creating quick, easy, and delicious recipes. Over twenty 4 Ingredients cookbooks have resulted in many cultural necessities and dietary considerations, often endorsed by recognised associations.

The 4 Ingredients phenomenon has taken digital media to heightened levels with one of the fastest-growing Australian-based Facebook pages currently with 540,000 fans and over 60,000 iApp downloads. Traditional media have equally enjoyed Kim's easy, everyday recipes seeing her cooking live on television around the globe, including Australian morning and Current Affair shows, America’s FOX 5 and ABC’s Good Morning America, New Zealand’s TVNZ and UK’s BBC. For more information visit 4Ingredients.com.au. --This text refers to an alternate kindle_edition edition.