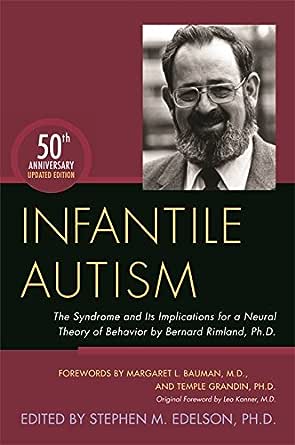 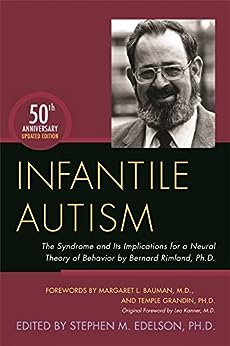 Infantile Autism: The Syndrome and Its Implications for a Neural Theory of Behavior by Bernard Rimland, Ph.D. 50th Revised ed. Edition, Kindle Edition

While still in fellowship training in pediatric neurology, my chief Richmond Paine handed me a copy of the book on infantile autism by Bernard Rimland and told me to read it. I was impressed by the book and began to schedule young patients with autistic features. I got in touch with Bernard Rimland and offered to test blood levels in children with autism in a serotonin laboratory I had just started. The rest is history - that prescient book by Bernard Rimland to some extent altered my lifelong professional focus. -- Mary Coleman, M.D., President, Foundation for Autism Research This book is an unparalleled testament to [Dr. Rimland's] long and productive career, to his determination to solve the puzzle of autism and to a brilliant and inquisitive mind. Please enjoy this book. It is a testament to this man's exceptional journey to find answers to one of the most complex medical disorders of our time. -- from the foreword by Margaret L. Bauman, M.D. This book is a remarkable testament to where the neurobiology of autism began and thus where the recognition of autism as a brain disorder originated. The understanding of the neural, cognitive, and genetic basis of autism has come light years beyond its origins in this original treatise and is moving very fast. The updates to the original chapters provide a wonderful sense of the distance that has been covered. I would recommend this book to everyone with an interest in autism or as we call it now, autism spectrum disorder. -- Nancy Minshew, M.D., Professor of Psychiatry & Neurology, University of Pittsburgh School of Medicine, US Dr. Rimland is to be commended for presenting the first evidence that autism was a biological condition. When his book was published, he was a lone visionary. -- from the foreword by Temple Grandin, Ph.D. Bernie Rimland's substantial impact on the field of autism can still be felt today. It is fitting that his legacy be honored with this reprint of his original book which was written 50 years ago. The added commentaries by today's experts highlight how Dr. Rimland's original insights permeate current perspectives on autism. Every student of autism should read Dr. Rimland's book. -- Geraldine Dawson, Ph.D., Director, Duke Center for Autism and Brain Development, Duke University School of Medicine, US Bernie Rimland was a pioneer in the field of autism. From his work in being one of the founders of the Autism Society of America in 1965 to his work in setting up the Autism Research Institute, Bernie's legacy is one of caring, compassion and results. As we celebrate the 50th anniversary of Bernie's writings helping so many impacted by autism, we also celebrate the strong legacy of this man and his work.? -- Scott Badesch, President, Autism Society, US Bernard Rimland's book "Infantile Autism: The Syndrome and Its Implication for a Neural Theory of Behavior" (1964), was a pioneering effort, especially noteworthy because, as a parent as well as a scientist, he stuck out strongly for an objective, science-based approach to understanding autism at a time when the field was rocked by mysticism. The book was prescient, pointing at the connections between the underlying neural deficits in autism, and effective behavioral treatment which are only today being proven. Rimland's book, along with Rosalind Oppenheim's "Effective Teaching Methods for Children with Autism," were the very first in the field, both strongly promoted objective, systematic behavioral strategies and both were written by parents. Remarkable. -- Travis Thompson, Ph.D., Professor, Special Education Program, Department of Educational Psychology, University of Minnesota, US Bernard Rimland wrote with both passion and scientific fervor. The end result was a classic that reinterpreted the prevailing view on autism by the medical profession. His book enriched our minds with a neurobiological perspective that continues to generate interest across generations with ideas that are still relevant. -- Manuel F. Casanova, M.D., Gottfried and Gisela Endowed Chair in Psychiatry, University of Louisville, US Bernard Rimland was an astonishingly farsighted pioneer in drawing a road map towards a neuroscience of autism. It is a fitting tribute that his seminal book, published fifty years ago, is made available to a new generation of researchers, together with reflections on its influence on our understanding of autism today. -- Uta Frith, Emeritus Professor of Cognitive Development, University College London, UK --This text refers to an out of print or unavailable edition of this title.

Bernard Rimland (1928-2006), Ph.D., was a psychologist and founder of the Autism Society of America and the Autism Research Institute. After diagnosing his own son with autism, he undertook extensive research into its causes, eventually publishing Infantile Autism in 1964. The book shattered the then-accepted myth that autism was an emotional disorder caused by "refrigerator mothers" and gave hope to thousands of autistic children and their parents. The thesis was so ground-breaking that it won The Century Psychology Series Award for its significant contribution to the field of psychology. Having dedicated nearly 50 years of his life to autism, Dr. Rimland's contributions to the field go well beyond this book. His work has improved the lives of hundreds of thousands of individuals with autism and their families. Stephen M. Edelson, Ph.D., is the director of the Autism Research Institute (ARI). Active in the field of autism for over 35 years, he was named director of ARI in 2006 after the passing of autism pioneer and advocate, Dr. Bernard Rimland. Dr. Edelson has conducted research in a variety of areas comprising behavior, biomedical, sensory issues, and cognition; he has published peer-reviewed research articles with many notables in the autism field, including Drs. Bernard Rimland, Ivar Lovaas, Temple Grandin, Melvin Kaplan, and Margaret Bauman. Dr. Edelson is the consulting editor for the research journal Focus on Autism and Other Developmental Disabilities. He is a participant on the Panel of Professional Advisors for the Autism Society of America (ASA). He is a former ASA Board member and a past president of the Autism Society of Oregon. --This text refers to an out of print or unavailable edition of this title.

gordoncanada
4.0 out of 5 stars Autism history
Reviewed in Canada on 5 August 2018
Verified Purchase
Everyone interested in autism and the history of autism should read this book. It is a classic.
Read more
Report abuse
See all reviews
Get FREE delivery with Amazon Prime
Prime members enjoy FREE Delivery and exclusive access to movies, TV shows, music, Kindle e-books, Twitch Prime, and more.
> Get Started
Back to top
Get to Know Us
Make Money with Us
Let Us Help You
And don't forget:
© 1996-2020, Amazon.com, Inc. or its affiliates