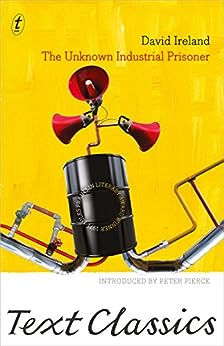 DAVIDD IRELAND was born in 1927 on a kitchen table in Lakemba in south-western Sydney. He lived in many places and worked at many jobs, including greenskeeper, factory hand, and for an extended period in an oil refinery, before he became a full-time writer.
Ireland started out writing poetry and drama but then turned to fiction. His first novel, The "Chantic Bird," was published in 1968. In the next decade he published five further novels, three of which won the Miles Franklin Award: "The Unknown Industrial Prisoner, The Glass Canoe" and "A Woman of the Future."
David Ireland was made a member of the Order of Australia in 1981. In 1985 he received the Australian Literature Society Gold Medal for his novel "Archimedes and the Seagull."
David Ireland lives in New South Wales.

PETER PIERCE is adjunct professor in the School of Journalism, Australian and Indigenous Studies at Monash University. He edited "The Oxford Literary Guide to Australia" and "The Cambridge History of Australian Literature," and is the author of "Australian Melodramas: Thomas Keneally's Fiction" and "The Country of Lost Children: An Australian Anxiety." His reviews appear regularly in Australian newspapers. --This text refers to an alternate kindle_edition edition.

Arthur Athanassiou
5.0 out of 5 stars Amazing perspective of life in a refinery
Reviewed in the United States on 26 July 2013
Verified Purchase
This is an amazing book by one of Australia's best writers.

Set in and around life at the Botany Bay oil refinery, David Ireland takes into a world of facinating individuals who - while extremely different and in some cases hostile - work together in a highly flamible and dangerous environment.

His insight into the way "men" think and behave in such a workplace is remarkable - they all seem to drift through their day like in a dream state .. very surreal and disconnected.

David Ireland deserves the high praise he has received and while this is the only one of his books I have read to date - it rates as one of my favourites.

mitchell browne
5.0 out of 5 stars Five Stars
Reviewed in the United States on 13 March 2016
Verified Purchase
Buy it
Read more
Report abuse
See all reviews
Back to top
Get to Know Us
Make Money with Us
Let Us Help You
And don't forget:
© 1996-2021, Amazon.com, Inc. or its affiliates