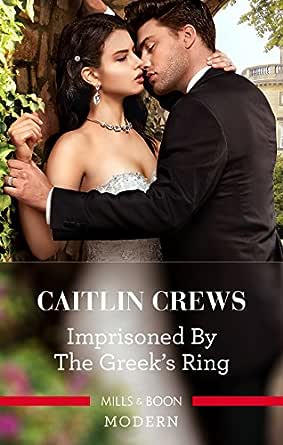 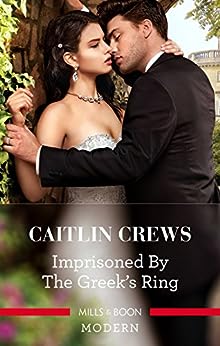 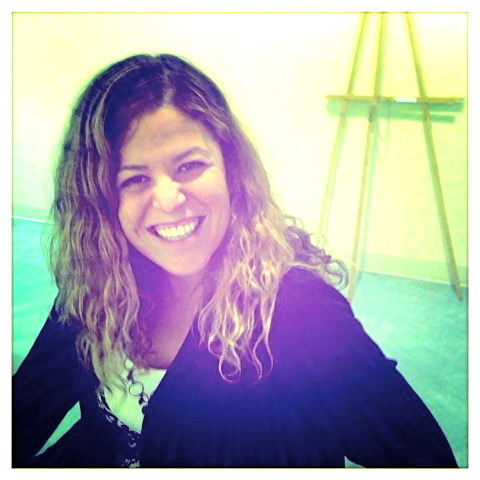 His vengeance will be complete… Now he has her as his bride!

After ten years in prison for a crime he didn't commit, ruthless Greek tycoon Atlas Chariton is back to take revenge on Lexi Haring – the woman who put him there. He'll meet her at the altar and bind her to him for life! But once married, the bliss of her sensual surrender threatens to unravel his hard–won vengeance…

D Joy
4.0 out of 5 stars Dark and Daring
5 May 2018 - Published on Amazon.com
Verified Purchase
This book is different from most in that it grips you in a dark, tense journey of pain, passion an d intrigue from the start. I love how it paints not just a picture in your head but also in your senses.
Read more
2 people found this helpful

Hazel B
4.0 out of 5 stars Interesting complicated plot
14 April 2019 - Published on Amazon.com
Verified Purchase
Well developed characters with interesting twists and supporting stories. However would have preferred better or faster deduction skills on the the main scenario
Read more
One person found this helpful

Kindle Customer
4.0 out of 5 stars The revenge bride
11 June 2018 - Published on Amazon.com
Verified Purchase
Although it was a good read, I gave it a rating of four...I don't think Atlas should have been in prison that long. Also, I didn't like how he treated Lexi. When he got out of prison, he was bent on revenge and took Lexi as his wife to get back at her family.
Read more
One person found this helpful

Donna Repsher
5.0 out of 5 stars A skillful, dark and intense read--I couldn't put it down
20 May 2018 - Published on Amazon.com
This is the first time I've read Caitlin Crews under this pseudonym in Harlequin Presents, an imprint I've tended to avoid since I remember it as being rather bland and tame, but it is bland and tame no longer, and I found this novel to be wonderfully intense and complex, and it gets a 5-star rating from this reader.

Lexi Haring, the heroine, is a Cinderella-like character, one who was brought to the impressive Worth estate by her Uncle Richard when she was just 8 years old, the daughter of her disowned and disgraced, drug-addicted mother, and her equally addicted father. Now, 20 years later, after having been treated by her uncle and the rest of the Worth family as a simple drone of a secretary, kowtowing to their needs when they aren't ignoring her existence, maintaining their business records, living off the grounds of the wealthy family estate like a pauper, in a tiny hovel of an apartment and thrilled to have it, while always remaining almost invisible to the family, meek and mild, accepting of any crumbs they throw her way, and grateful for those crumbs, but that's all about to change in a way neither she nor the Worth family ever anticipated.

The reason why everything is about to change is that Atlas Chariton is being released from what was to have been a life sentence for murdering Phillipa Worth, Lexi's cousin, and the only true friend she's ever had. It was 18-year-old Lexi's testimony on the witness stand at Atlas' trial, that she'd overheard an argument between Atlas and Phillipa the night before Phillipa's dead body was found strangled and floating in the swimming pool. He's spent the last decade imprisoned for a crime he didn't commit, but has just been released after DNA evidence brought up as his appeal, proved, without question, that he was completely innocent of the crime--and now he's back, with only one thing on his mind--revenge. He burns with it, and has spent the entire time of his incarceration planning and plotting precisely how he will exact that revenge on Lexi and the rest of the Worth family, and while her uncle and relatives assume he'll merely want monetary compensation, they are in for a rude awakening, and so is Lexi, now 28, who has been feeling guilty about her honest testimony for the past decade, quiet, mousy and alone, and doing her best to stay invisible and not make any waves. It was impossible not to equate her with Charlotte Bronte's Jane Eyre.

And if Lexi was Jane Eyre, then Atlas was most definitely Heathcliff, from Emily Bronte's Wuthering Heights. Tall, darkly handsome, imposing, snide, controlling, and seething with anger and resentment at having spent the past 10 years of his life in a prison cell for a crime he didn't commit. I'll stop storytelling at this point because from here on out, the way Atlas slowly unveils his plans for retribution, and the way Lexi fits into his plan, you are not going to want to put this book down, I know I didn't, and I'd hate to spoil it for you. I must, however, mention the level of heat in this novel, something I've never encountered before in this imprint. It was graphic, hot and steamy, and a welcome addition to the emotional narrative. To top off this incredible novel there's also the whodunit. If Atlas didn't murder Phillipa, who did? The answer to this question, will surprise you, just as it surprised me.

What I can tell you is that this novel was far better than any Harlequin Presents novel I've ever read, and the skillful way Ms. Crews, wove two of my favorite novels of all time into this tale of love, regrets, retribution, and redemption was nothing less than masterful. It was a beautifully written tale, filled with angst and emotion--I absolutely loved it, and highly recommend it.

I voluntarily read an advance reader copy of this novel. The opinions expressed are my own.

bsnksmom
4.0 out of 5 stars Revenge Marriage
11 August 2018 - Published on Amazon.com
Atlas Chariton has had ten years to plot his revenge on the Worth family, starting with Lexi Haring. It was her testimony, after all, that sealed his fate, sending him to prison for a crime he didn't commit. She is the lynchpin in his plan and she has no idea how much she has to lose.

Lexi has felt guilty for ten years, ever since her testimony was twisted to make Atlas look guilty of the murder of her cousin. She fell in love with him from afar as a naive 18 year old, and now, she can't believe he would come back to the family who didn't stand by him so long ago. When she learns of his revenge plot, she can't see any way out except to marry him as he demands. When she learns from him that she's been an heiress all along, even though her uncle and cousins have always treated her as the unwanted poor relation, she feels justified going along for the ride.
Can love grow from such a beginning, or will hate continue to fester as Atlas single-mindedly pursues his revenge plot?
This Cinderella story was filled with angst. Atlas was a very strong character, but it felt like Lexi was too mousy to be a match for him, at least for most of the book. Readers who enjoy the Harlequin Presents line will definitely love this one. It's one of the best I've read recently.
Read more
One person found this helpful
Go to Amazon.com to see all 8 reviews 3.8 out of 5 stars
Get FREE delivery with Amazon Prime
Prime members enjoy FREE Delivery and exclusive access to movies, TV shows, music, Kindle e-books, Twitch Prime, and more.
> Get Started
Back to top
Get to Know Us
Make Money with Us
Let Us Help You
And don't forget:
© 1996-2020, Amazon.com, Inc. or its affiliates