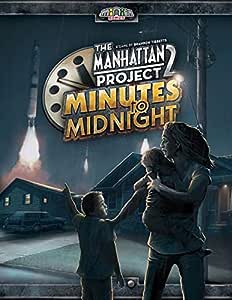 It has been 20 years since the invention of the atomic bomb, and the superpowers of the world have remained embroiled in an ever-escalating arms race. The production of fissile material no longer poses a challenge for any nation. Instead, the race has switched to the development of a wide range of delivery systems. In a crisis, your nation will need to strike faster and farther from land, sea, and air. Take charge of your nationandrsquo; s andldquo; Nuclear Triadandrdquo; and always remember: a credible threat is your most effective deterrent!

< strong>< em> Minutes to Midnight</em></strong> allows you to play the game you want. From many paths to victory to be able to choose your own game length by setting the adjustable scoring rounds to different intervals. With interesting confrontational mechanics such as controlling another playerand#39; s coastal waters or third world nation to spying on other playerand#39; s buildings.

< em> The standalone sequel to The Manhattan Project by the same designer. Command your nationand#39; s nuclear weapons program during the cold war.</em>

william peteresen
5.0 out of 5 stars Manhattan Project Enters the Arms Race and Goes HEAVY Euro!
Reviewed in the United States on 12 June 2018
Verified Purchase
Manhattan Project: 2 Minutes to Midnight is the direct sequel to the classic Manhattan Project. Both games have the same theme of using nuclear weapons (in some manner) to score victory points, and both games are Euro-style worker placement games wherein every turn the players will either be placing workers or removing them. Along the way, players will buy buildings that will give them special powers, resources and ways to increase your tech level and military power (see below). But that's where the similarities end!

In Manhattan Project: 2 Minutes to Midnight, each player will represent a historic cold war nation attempting to become the worlds greatest nuclear power! In addition, you then use your nuclear weapons to threaten, intimidate, and overwhelm your opponents, scoring victory points along the way. This game gives you four (4) main ways to flex your nuclear muscles: ICBMS, Strategic Bombers, Nuclear Submarines and controlling 3rd World countries on your opponents boarders (and placing nukes in them pointed their way!!)! You will then send these nuclear tipped weapons in your opponents airspace, coastal waters and neighboring countries! Each weapons system of course has a countermeasure: ABMS counter ICBMS; Fighter Jets counter Strategic Bombers; Sweeping your coastal waters sinks enemy Nuclear Subs; and political actions and counter your enemies influence in your neighbors. Part of the game's complexity, and great strategy, comes from deciding which weapons system(s) invest in and how much to spend on defensive measures!

2 Minutes to Midnight adds many layers of strategy and/or complexity compared to the first game. The first major addition is "Tech level." The games comes with a separate board to keep track of the tech-level of each weapon system per nation. Your weapon's tech-level determines how potent your nuclear weapons are versus your enemies and how strong your defenses are visa' via those weapons-both can impact scoring. The second, greater change from Manhattan Project, are "Military Actions." Military actions are how you deploy your nuclear deterrents after you've built them. It's almost a mini-game onto itself how it works. Military actions require a whole different type of worker: The General.

The scoring system is going to get a lot of love...or hate...depending on your play style. First, each weapon system has it's own unique way of scoring, and each one is fairly complex. Secondly, and most importantly, each scoring phase (per weapon system) will be determined RANDOMLY EVERY GAME! The interval between turns is also variable depending on player count! Which means in one game, ICBMs will score first, in another Strategic Bombers will score first, etc. This drove some of our players crazy with frustration as they felt getting locked out of an entire scoring phase because just 1-2 players concentrated on those weapon systems, monopolized the needed resources, and scored a ton more points then the other players! However, a slim majority of our players thought it was a great scoring system that FORCES you to react to other players and choose your priorities early.

Another radical change in 2 Minutes to Midnight is the way worker placement works, In the original game, when you PLACED your worker in a worker space you took the action immediately-not so in Manhattan Project 2. Now, you only activate each worker space when you RETRIEVE your workers from the board! This small, but radical change, turns how the game is played (visa' via the original) completely on it's head. Worker placement is now even more strategic and requires way more pre-planning as you can keep placing workers, until you run out, and later on pull them all of for a HUGE turn! Again, this split our group down the middle with half loving it; half wishing for a return to the way the original game did it.

Manhattan Project 2 really split our gaming group. Half of us (including me) thought it was a brilliant sequel to the original that plays RADICALLY different form the original game; the other half thought the game strayed to far from the original and lost a lot of Manhattan Project's charm and simple, elegant game play. Personally, I love the changes and feel both games are great at what they do.

And finally, our play group was split on how aggressive and MEAN this game can be compared to the original. Attacking other players in Manhattan Project was a viable strategy but isn't required to win. However, in 2 Minutes to Midnight, attacking your players (albeit indirectly) is MANDITORY. You're constantly on the lookout for ways to weaken your enemy's nuclear arsenal and cost him VPs! In nuclear war, there is no second place!


Read more
18 people found this helpful
Report abuse
See all reviews
Get FREE delivery with Amazon Prime
Prime members enjoy FREE Delivery and exclusive access to movies, TV shows, music, Kindle e-books, Twitch Prime, and more.
> Get Started
Back to top
Get to Know Us
Make Money with Us
Let Us Help You
And don't forget:
© 1996-2020, Amazon.com, Inc. or its affiliates