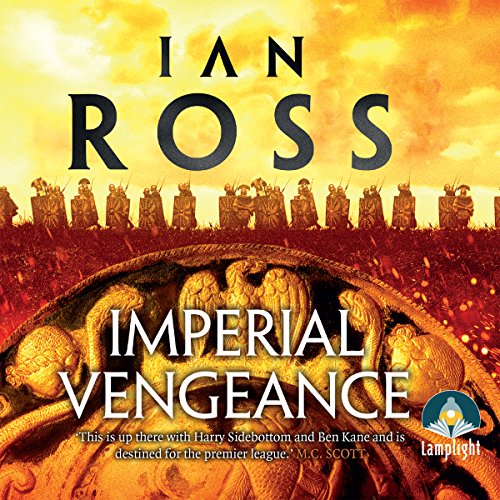 Aurelius Castus is one of the leading military commanders of an empire riven by civil war, but age is telling upon him. Castus discovers that the emperor's son Crispus aims to depose his ruthless father and restore the old ways of Rome. With a sadistic torturer on his trail, Castus must choose between honour and survival, and face a final confrontation with the most powerful man in the Roman world: the emperor Constantine himself.

4.7 out of 5 stars
4.7 out of 5
79 global ratings
How are ratings calculated?
To calculate the overall star rating and percentage breakdown by star, we don’t use a simple average. Instead, our system considers things like how recent a review is and if the reviewer bought the item on Amazon. It also analyses reviews to verify trustworthiness.

Davey
TOP 500 REVIEWER
5.0 out of 5 stars Highly Recommended.
Reviewed in Australia on 8 March 2018
Verified Purchase
"Imperial Vengeance" relates the further exploits of Castus Aurelius who must choose between honour and survival as Constantine, Licinius and their sons vie for power. This is a great book from Ian Ross and highly recommended.
Read more
Helpful
Report abuse

Clemens A. Schoonderwoert
5.0 out of 5 stars A Magnificent Imperial Act Of Vengeance!
Reviewed in the United Kingdom on 2 February 2018
Verified Purchase
This very entertaining book is the 5th volume of the fabulous "'Twilight of the Empire" series by the author Ian Ross.
The historical details concerning this story are splendidly researched and explained, from what is known or suggested by historians, within the author's note at the end of the book.
At the beginning of the book you'll find a wonderful drawn-map of the Central Provinces of the Roman Empire AD 323-326, and a text from Emperor Constantine by Codex Theodosianus.
Story-telling is once again of a top-notch quality, because the author lets his tale flow with wonderful interaction between all the characters, and in doing so all the characters, whether they are real or fictional, come vividly to life within this tremendous Roman tale to grip the reader from start to finish.
The story sets off in the year AD 323 and will end in the year AD 326, with Emperor Constantine in power over Rome and the Western Provinces and still in mortal conflict with Emperor Licinius who holds Thrace, the East and Egypt, while this same Emperor Constantine is looking for a way to accomplish sole total control of the whole Roman Empire.
Other obstacles for Emperor Constantine will become his son Crispus Caesar, who's very popular in the Provinces, and Constantine's wife the Empress Fausta, and not to forget Constantine's manipulative mother Helena, for they will also play a major part in this book of power, ruthlessness, betrayal, loyalty and control of the whole Roman Empire, and it is in this background situation where our main leading fictional character Aurelius Castus, who has sworn loyalty to Emperor Constantine but who's from the old ways himself, just like Crispus Caesar, has to find a way to choose between honour or survival in the final deadly confrontation that is to come in the end.
Highly recommended, for this is another superb Roman story come alive and one that is for me: "A Magnificent Imperial Act Of Vengeance"!
Read more
2 people found this helpful
Report abuse

Alan B
5.0 out of 5 stars Excellent read, as always.
Reviewed in the United Kingdom on 28 September 2019
Verified Purchase
This was the final chapter for me. Having not read them all in sequence. I read a lot of Roman fiction novels and Ian Ross is up there with the best.

I’m not sure where the author will go next, as Castus appears to be retired and off the radar.
Read more
One person found this helpful
Report abuse

Ray 55
5.0 out of 5 stars Good read
Reviewed in the United Kingdom on 26 May 2021
Verified Purchase
A good read battle scenes described in detail..Castus has much to loose in the game of politics within Rome and sadly he loses people close to him in an effort to remain at least neutral if that can be said..a good read again by author...book came 3 days in very good condition from one of my favourite sellers cant complain
Read more
Report abuse

A. Mccallum
5.0 out of 5 stars Excellent
Reviewed in the United Kingdom on 4 August 2019
Verified Purchase
Couldn't put this book down and have already started reading "Triumph in Dust" the next book in the series.
Read more
One person found this helpful
Report abuse

D. Howie
5.0 out of 5 stars Very Enjoyable
Reviewed in the United Kingdom on 26 July 2018
Verified Purchase
Again really enjoyed this book, have enjoyed the whole series, thought this might have been the last but was happy we had another one in the pipeline. Recommended
Read more
One person found this helpful
Report abuse
See all reviews
Back to top
Get to Know Us
Make Money with Us
Let Us Help You
And don't forget:
© 1996-2021, Amazon.com, Inc. or its affiliates