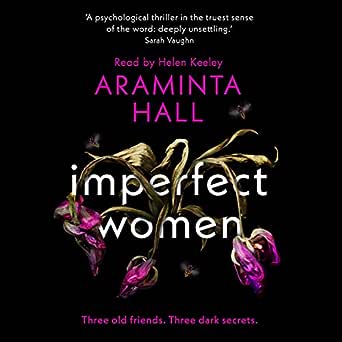 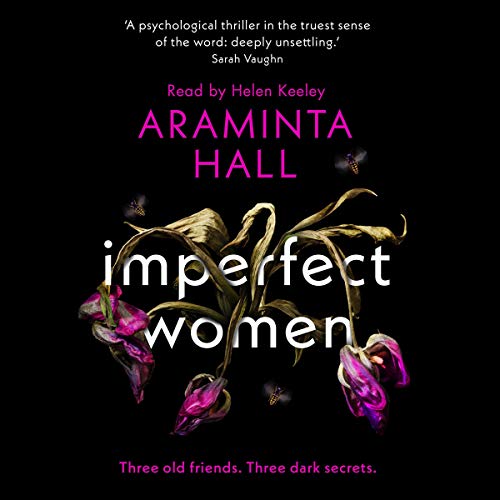 4.0 out of 5 stars
4 out of 5
452 global ratings
How are ratings calculated?
To calculate the overall star rating and percentage breakdown by star, we don’t use a simple average. Instead, our system considers things like how recent a review is and if the reviewer bought the item on Amazon. It also analyses reviews to verify trustworthiness.

Natalie Campbell
4.0 out of 5 stars A whodunnit chick-lit in one.
Reviewed in Australia on 23 September 2020
A tale of 3 forty-something women, friends since university who find themselves living quite different lives from each other - yet still remain close friends. One of them is found dead after trying to end an affair and then the story unfolds told from the viewpoint of each of the women, leading up to who was responsible for the death.

Imperfect Women is an enjoyable read with relatable, although not necessarily likeable characters, that will have you eager to keep reading. The husbands are terrible, the children suspicious and the women all have their own individual struggles. An enjoyable read that wraps up nicely at the end.
Read more
Helpful
Report abuse
See all reviews

Lynda Kelly
2.0 out of 5 stars Too Much Guff
Reviewed in the United Kingdom on 3 October 2020
Verified Purchase
This was a mistake of a purchase as my phone screen jumped so I hit Buy It Now as opposed to dumping it in my wishlist but it sounded interesting so I kept it.
It was totally overhyped as far as I'm concerned, though. I don't get all the accolades its being afforded myself.
I didn't understand what Nancy's mum meant when she said "If she could have waited a few more years I could have been gone as well" since Nancy was murdered, she hadn't done herself in !! As far as it was going with Eleanor, it was all me, me, me all the time and I was finding her extremely tiresome.
The author did one of those appallingly twee things Americans do of having all the same initialled names, so Mary had Marcus, Maisie and Mimi....stop doing this, it's ridiculous, America !! At one point, Eleanor is watching a body being removed in a body bag and she is ruminating as to whether this was how Nancy had left the riverbank where she was found.....well, she hardly skipped to the ambulance, did she, so that was a totally needless thing to have written !! When we hear of Davide, and Eleanor plans to meet him, she has to go to him cos' he still wasn't up to making long journeys.....why ? He isn't crippled !!
I noticed the odd misused apostrophe and she wrote tusked and not tsked and another TERRIBLE mistake writing freind and not friend !!
I packed it in when I got fed up with all the superfluous stuff she includes. Sentences like "She felt her muscles harden and knew that movement would soon feel jagged and clumsy".....are just guff and I got to "Her legs felt heavy and she let them buckle" and packed it in !! Ridiculous stuff.....
I'd reached 39% and there was no hint of this supposed investigation by Mary and Eleanor so I gave up on it altogether. They're both so wrapped up in themselves, Eleanor especially, that I don't see them ever being interested enough to learn what happened to Nancy, and I didn't care enough to finish it !
Read more
6 people found this helpful
Report abuse

Justine
4.0 out of 5 stars Explores the many roles women play and how they shape their lives
Reviewed in the United Kingdom on 28 September 2020
Verified Purchase
Three friends meet at University.
Eleanor – she’s never been married or had children but has always had a secret crush on her friend Nancy’s husband. When she first met him she believed him to be interested in her, but he contacted her as a route to get to Nancy. She’s never found serious love and concentrated on her career.
Nancy – the beautiful, glamorous one who gave up her career to bring up her family. She has a daughter Zara and a husband who loves her, but she’s bored with her life and looking for excitement.
Mary – mother of three who gave up her career to bring up her family. She met her husband, a married university professor, when she worked for him as his assistant. She was younger than him and fell for his charms. When she got pregnant he left his wife for her. She is treated badly physically and emotionally by him and it is rumoured that he has had many extra-marital affairs.
One night Nancy is found dead. Mary knows that she was having an affair but believed it to be over. Neither of her friends knew who it was with but believed it to be with an author, Davide. There are twists and turns which surprise us all the way through.
After Nancy’s death Eleanor starts a relationship with her husband, who she’s always had feelings for. She has to battle her feelings of love for him with her feelings of guilt over her friend’s death. She is also battling feelings of guilt over the death of an elderly neighbour she felt responsible for.
The book explores friendship, betrayal, breakdowns of relationships and the guilt all women feel every day trying to juggle work and family life and the many roles women are expected to play. All the characters are relatable and you love, dislike and empathise with them all at different points in the book.
This is a brilliant book that I thoroughly enjoyed and would recommend to all.
Read more
2 people found this helpful
Report abuse

Steven
3.0 out of 5 stars Imperfect Women
Reviewed in the United Kingdom on 6 October 2020
Verified Purchase
this is quite a hard book for me to review. I've previously read and loved Our Little Cruilties by the same author but struggled a little with this one.

The book is about 3 friends nancy, Mary and Eleanor who have known each other since university. When one of them is murdered, the 2 remaining friends are left to pick up the pieces. The book is split in to 3 parts for each of the 3 women ana, as we read on, secrets and lies are revealed.

the biggest problem for me was I struggled to identify with any of the characters and really didn't like any of them very much with the exception of one of the women who I felt sorry for. they all seemed to make poor and selfish decitions and had very little to redeem them. I also think the structure of the book didn't help in terms of building the suspense, i guessed who the murderer was pretty early on and was proved right.
Read more
Report abuse

Lolly130612
5.0 out of 5 stars Amazing
Reviewed in the United Kingdom on 7 August 2020
Verified Purchase
All of the women in the book were incredibly relatable and so, so real.
I most certainly didn't see the twists coming but it's more than just a domestic thriller, or whatever genre it's supposed to be, it goes deeper than that in , that it teaches us to look deep down in psyche.
Read more
3 people found this helpful
Report abuse

Lilo
1.0 out of 5 stars Boring
Reviewed in the United Kingdom on 22 December 2020
Verified Purchase
I don't often find reading a chore, but reading this certainly made it feel like one. As someone who feels the need to finish a book once I have started it, I felt as though I were punishing myself.

I love a good mystery, however, this was terribly predictable. Filled with dreadful stereotypes and characters that were so unlikable it was hard to believe how any of them were friends. None of the characters felt like they could be real people, or even spoke to each other in a realistic manner.

This book also would have benefitted from the use of chapters, without them, the book feels even longer. Do yourself a favour and skip this one.
Read more
Report abuse
See all reviews
Back to top
Get to Know Us
Make Money with Us
Let Us Help You
And don't forget:
© 1996-2021, Amazon.com, Inc. or its affiliates