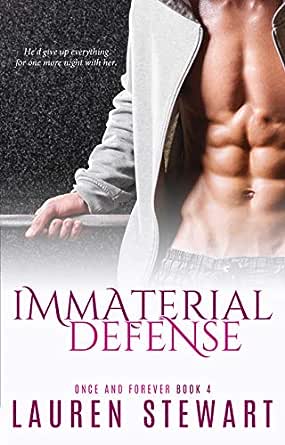 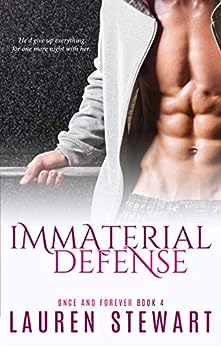 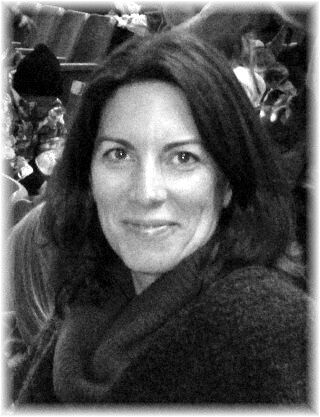 Kindle Customer
5.0 out of 5 stars Stunning, Stunning, all the stars stunning
Reviewed in Canada on 22 December 2020
Verified Purchase
I've been getting reading drunk and hungover on Lauren Stewart's Once and Forever Series, all four books, while hiding out in isolation with my family during Covid's trying times. I'll have to write her a fan letter for this series because I suspects she's not only kept me entertained but also prevented me from strangling my spawn and my husband because this series makes me so" bleeping" happy. Ms Stewart is the queen of "will -this -be -the- first- romance -without- an HEA" and then she springs one on you that curls your toes, and helps you take a deep heart- warming breath after holding it for as long as it takes you to get to the end of each book. Lauren has angst down to a polished art form. Not to mention sassy heroines, and swoony, funny leading men.

Here, Ms. Stewart hit upon my romance reading " crack ": rock star romance, but specifically involving a young band, having experienced the early blush of success, but as of yet unsigned by a recording company. Our hero, Declan, is a reluctant star, too talented and too good looking for his own extraverted-introvert heart. He's becoming turned off by music because of the partying and sexual hype surrounding being the front man for an up and coming band .The only reason Dec is still fronting the band is because of his deep affection for his band mates, and his determination to help them realize their rock and roll dreams despite growing pressure by their manager to go solo because his looks make him so easily marketable. During this emotionally unsettling time in his life he meets Sara, a petite beauty with a quirky intelligence, and a sexually traumatized past. She's real with him when they first meet because she has no idea about who he is and knows nothing about his growing fame . She's attracted to him as a man, not a performer; and this is catnip for our emotionally intune baby rockstar. How these two move from intense physical attraction, through curious infatuation, to the kind of love where you sacrifice for one another will make you read far later into the night than you necessarily want to do. I'm not paying platitudes here; be sure you schedule for a reading hangover.

Linda Murphy on
5.0 out of 5 stars How could a stereotypical bad boy on stage make her feel so safe?...
Reviewed in the United States on 26 June 2019
Verified Purchase
Bestselling author Lauren Stewart delivers another blockbuster in this heartfelt fairy tale love story....(18+).........Once upon a time, she was left wounded and her soul scarred. After spending one night with the most incredible guy, a beautiful guy who remained nameless, Sara knew without a doubt that he was dangerous in an emotional way. How could someone who looked so much like a stereotypical bad boy on stage, make her feel so safe? Spending one night in his loving arms, Sara did the only thing she could do out of mounting fear, she ran. Rocker Declan Hollis was tired of the crazy fans and the wanna-be rockers who not only packed his audience, but worshipped him like some musical god. He wanted and craved something real, and the moment he first saw her, she felt so close to perfect as two people ever got. Declan had his fair share of one-night stands, but after one night with Sara, his life felt fuller, deeper and happier, until his world collapsed. She ran away .Why?.....
Read more
One person found this helpful
Report abuse

Nancy Reads
5.0 out of 5 stars More Than a One-Night Stand
Reviewed in the United States on 26 September 2018
Verified Purchase
IMMATERIAL DEFENSE is a standalone in the Once and Forever Series and Book 4. I always enjoy Lauren Stewart's unique humor in telling her “Once Upon A Time” stories.

Declan Hollis is a reluctant up and coming rock star in a band named Self Defense. He is the face of the band because he is the lead singer. This is really not his dream, but he can't let his best-friend Trevor and the other guys in the band down. So when he went home he wanted to be left alone, just him, his guitar and his eighty pound Goldendoodle dog named Kitty.

All that changed when he had a one-night stand with a girl named Sara. She had no clue about the Declan Hollis that was lead singer of Self Defense. She'd met Declan Hollis, the man who just wanted to be normal. They connected so well and he didn't want to bring her into any part of his band life. He didn't want Sara to judge him for what he did. He wanted her to judge him for who he really was. He wanted the chance to get to know one another slowly, naturally, and in a real way. For one magical, perfect night he thought he had found what he wanted in Sara, but then she ran.

Declan was devastated when Sara left that morning, leaving him with zero ways to contact her. He knew how messed up he was, but it had usually taken at least until lunchtime for a woman to figure it out. He hadn't met a sane woman in years, so what was the chance that Sara wasn't crazy, too? Obviously, she had issues. But she was just screwed up enough to make her irresistible to his screwed-up side. She became “The Sara” and the one that got away. He was on a quest to find her. No matter what it is, until you quit trying, every moment you have is a moment you can make something incredible happen.

My favorite lines in the book, were between Sara and best friend at a house warming party. “Thanks for the wine and my wine rack, which has never been so beautifully filled as it is right now. But please tell me you didn't bring Chardonnay. I swear, every single one of Rob's friends brought us a bottle, and I can't stand the stuff.” I love wine, but got sick once on Chardonnay, so I can't stand it either!!
Read more
Report abuse

Robin Shawn
4.0 out of 5 stars Great Book
Reviewed in the United States on 29 September 2018
Verified Purchase
I really have enjoyed this series but for some reason this one was a little harder to get through. I think it was a case of bad timing. This book deals with some sensitive subjects and a lot was happening in the news at the time I read it related to sexual assault. That being said, the book was well written. I did get frustrated with both characters at times for being so quick to doubt the other person but I did like the way everything came together. My biggest complaint though was that the end felt so rushed. I would have loved to get some kind of epilogue or at least an extra couple of pages of them being together.
Read more
2 people found this helpful
Report abuse

Angela Raspberry
4.0 out of 5 stars Not as good as the first three
Reviewed in the United States on 28 June 2019
Verified Purchase
I have loved this series, especially Carson and Laney and that's why I'm giving this story 4 stars. It took me a long time to finish it. I'd start, read about 35% and then get bored. It seemed to be the same thing over and over, so drawn out. There wasn't much plot action; a lot of hinting around so that we could finally take a good guess at what the issue was but Sara spent so much time refusing to be honest with Declan that I finally didn't care. I'll read it again later and maybe I'll have a different impression.
Read more
Report abuse
See all reviews
Get FREE delivery with Amazon Prime
Prime members enjoy FREE Delivery and exclusive access to movies, TV shows, music, Kindle e-books, Twitch Prime, and more.
> Get Started
Back to top
Get to Know Us
Make Money with Us
Let Us Help You
And don't forget:
© 1996-2020, Amazon.com, Inc. or its affiliates